Adriana Varejão chose the field of painting to develop her work. His production includes photography, sculpture and installation, but above all painting, in the most classic sense of the term, through the use of materials and techniques characteristic of it, which is, historically, both the most noble and the most appreciated language of the visual arts. In the works gathered here, it is possible to follow the diversity of interests in his work and the variety of sources of his research – abstraction, ruin, the monument, monochromatism, violence; history, natural sciences, architecture.

Starting the route, is Panacea phantastica (2003-2007), a set of tiles that portrays 50 types of hallucinogenic plants from different parts of the world. Conceived as a multiple that can adapt to any architecture, the work here has become a bench at the entrance to the pavilion, a space for contemplation and conviviality. On one of the tiles, a text suggests the relationship between the hallucinogenic effects of plants and changes in perception that can also be caused by art. The tile, one of the recurring motifs of Varejão’s work, reappears in Linda do Rosário (2004) and in O colecionador (2008).

The one of the most important works in the Charques series. In these sculptures, architecture is associated with the body, and the building material becomes flesh. The work was inspired by the collapse of the Hotel Linda do Rosário, in downtown Rio de Janeiro, in 2002, whose tiled walls fell on a couple in one of the rooms of the building. The collector, in turn, is the largest painting in the Saunas series, and uses an almost monochrome palette to create an idealized inner labyrinth. With its play of light and shadow, the painting evokes spaces of pleasure and sensuality and reflects the architecture of the pavilion, proposing a virtual continuity of the space.

She participated in several national and international exhibitions, among them, at the Bienal de São Paulo, Tate Modern in London and MoMa in New York. She works a lot with tiles and is among the most successful on the world circuit. 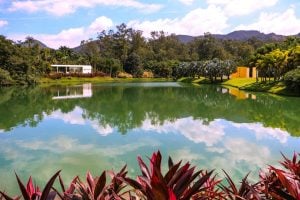 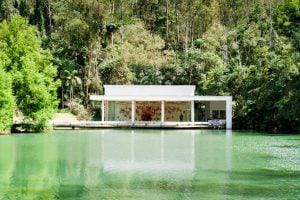 Born in Rio de Janeiro, Varejão spent part of her childhood in Brasília. In 1981, she entered the engineering course at the Pontifical Catholic University of Rio de Janeiro, abandoning it the following year. From 1983, she studied in the free courses at the School of Visual Arts of Parque Lage, Rio de Janeiro, and rented a studio in the Horto neighborhood with other students. In 1985, he travels to New York and has contact with the painting of German Anselm Kiefer and American Philip Guston. In 1986, he received the Acquisition Award for the 9th National Salon of Plastic Arts, promoted by the National Arts Foundation.

Through the reinterpretation of visual elements incorporated into Brazilian culture by colonization, such as the painting of Portuguese tiles, or the reference to the rawness and aggressiveness of the material in works with “flesh”, the artist discusses paradoxical relationships between sensuality and pain (fetishes), violence and exuberance. Her most recent works bring references focused on architecture, inspired by spaces such as butchers, taverns, saunas, swimming pools, etc., and address traditional painting issues, such as color, texture and perspective.

Influences
References to the effects of colonialism of Brazil by Europe, are apparent in her work as well as art history and illusion. Her work alludes to expansion and transformation of cultural identity, yet continues the use of her theme of understanding the past, in order to understand the present.

Cultural anthropology, or the process of absorbing and incorporating foreign influence into native Brazilian culture, inspires much of Varejão’s work. This movement is evident throughout Brazil’s history into the present and the dichotomy of diversity and unity is a common theme amongst contemporary Brazilian artists. In Varejão’s works, she examines this theme within the contexts of race, body, identity, and the effects of colonialism.

Media
Drawing upon tensions surrounding race and ethnicity in Brazil, Varejão uses installation, oil painting, and drawing to comment on the perception of race in Brazil in the twenty-first century. She often starts with a canvas, adding materials such as porcelain and ceramics. In her work entitled “Polvo,” exhibited at Lehman Maupin in 2014, Varejão combines color theory and casta (a social theory that influenced European paintings of Brazil’s conquest), to examine the norm of defining race in terms of skin color. The series of nearly identical self-portraits forming the bulk of the work were displayed with individualized titles that explained the portraits’ only differences: the titles were generated by the 1976 Brazilian census, which asked Brazilians for the first time to give their definitions of their own skin tone; the responses ranged from branquinha, “snow-white,” to morenão, roughly “big black dude.”

Works
One of the artist’s largest projects to date recently opened at Inhotim Centro de Arte Contemporânea, Brazil – a specially commissioned pavilion designed in collaboration with architect Rodrigeo Cervino Lopez. Her work is included in numerous collections worldwide, some of which are the Solomon R. Guggenheim Museum in New York, the Tate Modern in London, and the Museum of Contemporary Art San Diego, among others.

Carnivores, 2008
oil and plaster on canvas

Linda do Rosário, 2004
oil on aluminum and polyurethane

Passarinhos – from Inhotim to Demini, 2003-2008
painting on tiles [hand painting by Beatriz Sauer]