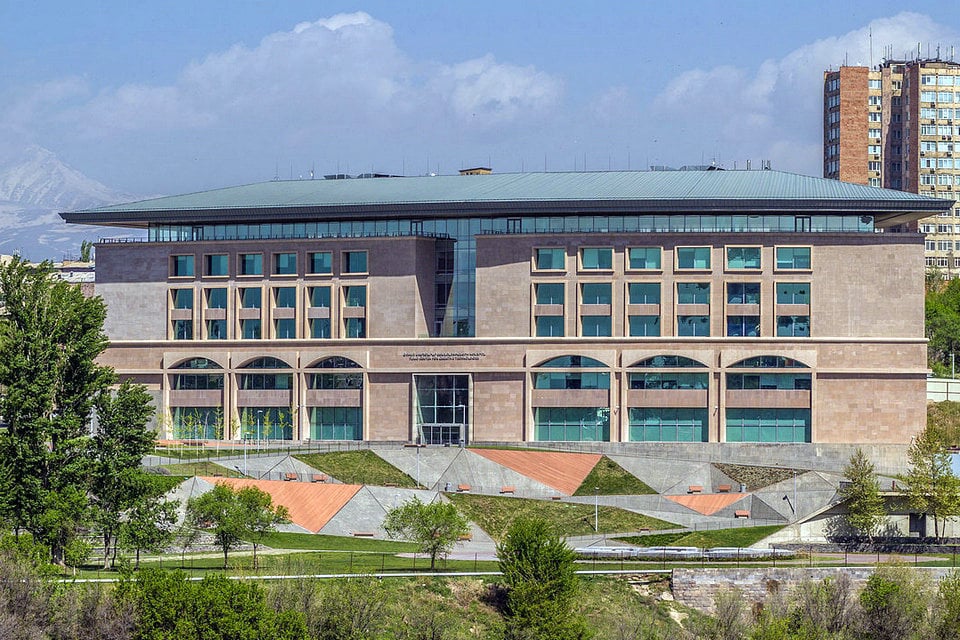 Graduates of primary and senior schools have the right to continue their studies in primary, secondary and higher vocational schools. There are also non-state educational institutions, schools, colleges, universities, etc., which not only provide education services, but also make a significant contribution to the development of the education system.

Education in Armenia has a centuries-old history and is an important factor in the manifestation of national independence, self-preservation. One of the main tasks of the state is the preservation and development of the education system, as well as ensuring its competitiveness. This is evidenced by the laws and decisions adopted after the proclamation of Armenia’s independence.

History
In its first years of independence, Armenia made uneven progress in establishing systems to meet its national requirements in social services. Education, held in particular esteem in Armenian culture, changed fastest of the social services, while health and welfare services attempted to maintain the basic state-planned structure of the Soviet era.

A literacy rate of 100% was reported as early as 1960. The numeracy level was amongst the lowest in the late 18th and 19th centuries, which might be an outcome of Ottoman and Persian education policies that only gradually improved during the Russian period. In the communist era, Armenian education followed the standard Soviet model of complete state control (from Moscow) of curricula and teaching methods and close integration of education activities with other aspects of society, such as politics, culture, and the economy. As in the Soviet period, primary and secondary education in Armenia is free, and completion of secondary school is compulsory.

In the early 1990s, Armenia made substantial changes to the centralized and regimented Soviet system. Because at least 98% of students in higher education were Armenian, curricula began to emphasize Armenian history and culture. Armenian became the dominant language of instruction, and many schools that had taught in Russian closed by the end of 1991. Russian was widely taught, however, as a second language.

In the 1990-91 school year, the estimated 1,307 primary and secondary schools were attended by 608,800 students. Another 70 specialized secondary institutions had 45,900 students, and 68,400 students were enrolled in a total of ten postsecondary institutions that included universities. In addition, 35% of eligible children attended preschools. In the 1988-89 school year, 301 students per 10,000 population were in specialized secondary or higher education, a figure slightly lower than the Soviet average. In 1989 some 58% of Armenians over age 15 had completed their secondary education, and 14% had a higher education.

In 1992 Armenia’s largest institution of higher learning, Yerevan State University, had 18 departments, including ones for social sciences, sciences, and law. Its faculty numbered about 1,300 teachers and its student population about 10,000 students. The Yerevan Architecture and Civil Engineering Institute was founded in 1989.

On the basis of the expansion and development of Yerevan State University a number of higher education independent institutions were formed including the Medical Institute separated in 1930 which was set up as a medical faculty. In 1980 Yerevan State Medical University (YSMU) was awarded one of the main rewards of the former USSR — the Order of the Red Banner of Labour for training qualified specialists in health care and valuable service in the development of medical science.

In 1995 YSMI was renamed to YSMU and since 1989 it has been named after Mkhitar Heratsi, a medieval doctor. Mkhitar Heratsi was the founder of Armenian Medical school in Cilician Armenia. The doctor played the same role in Armenian medical science as Hippocrates in Old Greek, Galen in Roman, and Ibn Sina in Arabic medicine.

Foreign students’ department for the Armenian diaspora was established in 1957; it later was enlarged and the enrollment of foreign students began. Nowadays the YSMU is a medical institution corresponding to international requirements, trains medical staff for Armenia and neighboring countries, i.e., Iran, Syria, Lebanon, Georgia and for many other leading countries all over the world. A great number of foreign students from India, Nepal, Sri Lanka, the USA and Russian Federation study together with Armenian students. Nowadays the university is ranked among famous higher medical institutions and takes its honorable place in the World Directory of Medical Schools published by the WHO.

Other schools in Armenia include the American University of Armenia, QSI International School of Yerevan and Eurasia International University (EIU). EIU is a private higher education institution established in Yerevan in 1996. On March 13, 1997 EIU was fully accredited based on the decision made by the Ministry of Science and Education of the RA. Since then EIU was authorized to issue State Diplomas. Starting from September 2007 Eurasia International University has fully conformed to the requirements of Bologna Process.

Right to education and legislation
The Republic of Armenia guarantees the right to education – regardless of nationality, race, sex, language, religion, political or other opinion, social origin, property status or other circumstances. According to the Constitution of the Republic of Armenia (Article 39) every citizen has the right to receive free higher or other professional education in state educational institutions on a competitive basis. In 1999 the National Assembly of the Republic of Armenia approved the Law “On Education”, thus contributing to the development of the education system. This document also provides for equal rights for men and women to receive education. In the year 2004The Armenian government approved the “New National Curriculum”, which set a number of new goals in the field of education. Education in Armenia is managed by the Ministry of Education and Science of Armenia.

Secondary education
The average complete general education in Armenia is carried out in a three-stage secondary school of 12 years duration at the following levels:

The presence of a certificate of secondary (complete) general education or a recognized equivalent certificate is a necessary condition for admission to universities. Admission to all higher education programs is carried out on a competitive basis based on the results of admission tests.

The educational institutions of the Republic of Armenia use a 10-point scale of assessments.

In the Republic of Armenia, the following qualification degrees of higher professional education are established: bachelor, graduate, master.

Graduates of medical schools after 6 years of study must pass an additional year of professional practice, the so-called internship, before submitting documents and the Ministry of Health and pass the qualification exam for obtaining a license for the right to professional activity. After internship, students can enter clinical internship, the duration of study in which, depending on the specialty, is from 2 to 4 years, to obtain in-depth knowledge in a narrow specialized field of medicine.

Doctoral programs are implemented in graduate school, the goal of these programs is to prepare scientific and pedagogical staff. Duration of doctoral programs from 2 to 3 years. After the defense of the thesis, the graduate is awarded the title of Candidate of Science (Gitoutunneri teknatsu), and at the completion of the program without defense of the thesis, mainly in technical fields, the graduate receives the title of engineer-investigator (Engineer-investigator). Doctorate is the highest level of academic career and leads to the receipt of the title of Doctor of Sciences (Gitoutunneri Doctor).

The history of education in Armenia

Vagharshapat seminary
Vagharshapat seminary is the first Armenian higher school of Christian Great Armenia. Founded Mesrop Mashtots and Sahak Partev after the creation of Mashtots in 405 – 406 gg. Armenian alphabet. It lasted until 510. It opened again in 1441, after the return of the Armenian throne from Sis (Cilicia) to Vagharshapat (Echmiadzin). On its basis in the 1870s, the modern “Gevorg Seminary” was founded.

Amaras
In the early fifth century. the founder of the Armenian alphabet of St. Mesrop Mashtots founded the first Armenian school in the monastery of Amaras, hence the spread of Armenian writing began.

From the buildings of the University today to the present day have only traces of its foundations. Today in the church of Surb Hakob of Vernashen village there is a museum dedicated to Gladzor University.

Statistics
According to the 1960 report, the literacy rate was 100%. Despite the fact that the level of quantitative thinking was one of the lowest, along with Georgia in the late 18th and 19th centuries, which may be a consequence of Ottoman and Persian educational policies, which only gradually improved during the times of the Russian Empire. In Soviet times, Armenian education existed within the framework of a standard Soviet model of full state control of curricula and teaching methods and close integration of educational activities with other aspects of society, such as politics, culture, economics. As in Soviet times, primary and secondary education in Armenia is free, and the end of secondary school is compulsory. In the early 1990s, significant changes were made in the Soviet model in Armenia. Since at least 98 percent of students in higher education institutions were Armenians, the curricula began to emphasize the history and culture of Armenia. Armenian became the dominant language of instruction, many schools that were taught in Russian were closed by the end of 1991. Russian languageis still widely taught, however, as a second language.

In the 1990-91 academic year, there were 1,307 primary and secondary schools, in which 608,800 students were enrolled. In 70 secondary specialized educational institutions there were 45,900 students and 68,400 students, were trained in a total of 10 institutions of higher education. In addition, 35 percent of children of the corresponding age were enrolled in pre-school institutions. In 1988-89 academic year. there were 301 students (institutions of higher education and secondary specialized institutions) per 10 thousand population and this figure was slightly lower than the average for the Union. In 1989, about 58 percent of Armenians over the age of 15 completed their secondary education, and 14 percent had higher education. In 1992, in the largest higher institution of Armenia, Yerevan State University, there were 18 faculties, where about 1,300 teachers were trained and about 10,000 students were trained. In 1989 the Yerevan Architectural and Construction Institute was founded. As of 1994, eight other higher educational institutions, located in Yerevan, were taught in the fields of agriculture, art and theater, economics, music, technology and applied science, pedagogy and foreign languages, medicine and veterinary medicine.

Student absenteeism
ATC Sudents in the Computer Lab.jpg
According to two studies carried out with the help of UNICEF — “Child Labour in Armenia” and “School Wastage Focusing on Student Absenteeism in Armenia” — a rapidly growing student absenteeism and dropout rate are closely linked to child labor and the quality of education in Armenia. Between 2002 and 2005 school dropout rates grew at the rate of 250% a year. In 2002-2003 total dropouts were 1,531 students; in 2004-2005 this number increased to 7,630.