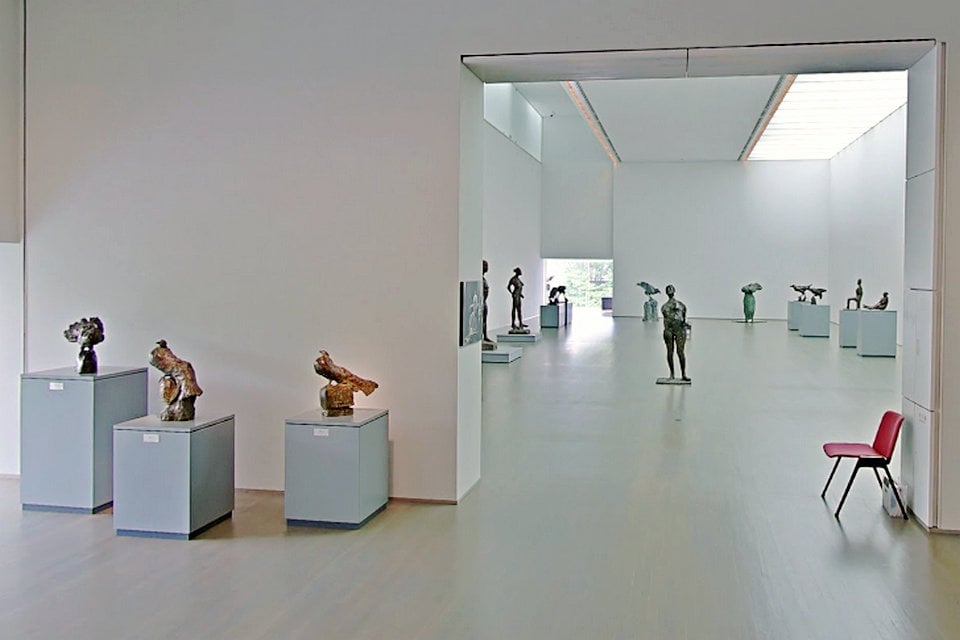 The art of Takeshi Koya, Mie Prefectural Museum of Art

Takeshi Koya (甲谷 武 1945-) is a contemporary artist from Ise City, Mie Prefecture. Kotani, who studied art by himself, began exhibiting at the Main Art Exhibition in the 1970s and later at the Modern Art Association Exhibition (1973). Since the 1980’s, he has been exhibiting at contemporary Japanese art exhibitions, etc., and is attracting attention with his white relief-shaped works.

Kotaya’s relief work is made by cutting white painted wood or plastic boards. Its major feature is the spatial expression that the form’s fun and shade interweave, and the modeling world that goes back and forth between two and three dimensions is full of clean and modern feeling.

In the 2000s, colorful works appeared in addition to white works. There is no change in Kotani’s keen sense of form and composition, but by gaining color, it can be said that Kotani’s work has become more expressive. Kadoya has participated in many exhibitions in Japan and abroad for the past 40 years or so, and has been highly regarded as a writer known to those in the know. However, surprisingly, there were only a few opportunities for the work to be introduced in Mie Prefecture.

This exhibition introduces the trajectory of Takeshi Kotani through works from the very beginning to recent works, focusing on reliefs composed of abstract forms and lines. We hope you will appreciate the expressive world of artistic beauty born of the collaboration between reason and sensibility. Lastly, Mr. Takeshi Kotani, who provided full cooperation in holding the exhibition, Mr. Okada Cultural Foundation, who provided the further support, Mie Prefectural Art Museum Cooperation Association, and other related parties who provided support Thank you.

At what age did you become interested in art?

Why do you produce so many “white” one-color works?

By adding a structure as a painting to a two-dimensional work, shadow movement occurs on the screen depending on the viewing angle and refraction of light. Originally, the thing behind the structure should look darker than the front, but painting the screen white will amplify the light, for example, the back side with the square cut off the front will look brighter. Incorporated in the screen configuration.

I experimented with red, black, etc. instead of “white”, but all absorbed light and no diffuse reflection occurred. As a result, the only color that could clearly express the intention of the work could not be found other than white.

What does “color” mean to you?

We believe that colors change with light. For example, no matter how many times a single color is applied, the color is faint and does not show the full potential of the color. When trying to take full advantage of the characteristics of yellow color, the base is painted red, etc., so that when light passes from the surface to the base color, refraction occurs between the top coat and the base, resulting in a clearer color It becomes. I think Wakaoki Ito also uses such a method. We recognize that color is the true color of light by taking light into account.

What does “light” mean to Mr. Kadani?

We consider light to be the source of potential, including all of the colors.

Why are you working on a relief work instead of a purely flat work?

Although it overlaps with the previous answer, if the screen illuminated by light is a real image, we believe that the shadow part is the imaginary world, and that there is human romance in the illusion of light and shadow.

What do you think of genre division such as “painting” or “three-dimensional”?

I have no consciousness of paintings and solids, and the works on the wall exist across genres. I consider a work to be displayed on a flat floor to be three-dimensional.

How do you think of the various forms that appear in your work?

I draw the image of the work with a pencil in the scale frame of 150 or 130. We finish at a stretch like drawing a stroke. Select one out of several pieces and draw and finish the form on a full-size plywood. We hardly modify strokes. I value momentum. Make a note of the image of your work when you are drinking or watching TV.

Mie Prefectural Museum of Art
Mie Prefectural Art Museum is an art museum located in Tsu City, Mie Prefecture. The museum opened in 1982 as the first full-scale art museum in the Chubu and Tokai districts. In 2003, the Yanagihara Yoshida Memorial Hall was opened. The collection of modern Japanese Western paintings is substantial.

The hallmark of the museum is that it is not just an ivory tower, it always seeks to work with society.

The most noticeable result of museum activity is in exhibiting works. The real value of a museum, in particular, is due to its permanent exhibits. The permanent exhibition in the main building is divided into four periods a year, aiming to systematically capture the flow of art from the present to the present, with a focus on modern Japanese painting. The special exhibition room holds independent exhibitions based on unique themes and joint exhibitions from a broader perspective.