The Civic Gallery of Modern and Contemporary Art of Turin (GAM ), in celebrate the civic collection celebrates 150 years since its establishment, proposes four new themes for a different reinterpretation of its masterpieces: the third appointment of a journey, when the museum completely renewed the layout of its permanent collections, abandoning the chronological criterion and ordering the works on display in thematic order, according to a method that involves the rotation of the heritage, over 47,000 paintings, drawings, sculptures, installations and videos, with the possibility of distributing it according to transversal interpretative models and thus rediscovering masterpieces that have not been exhibited for some time.

The two previous productions (in 2009 and 2011) involved eight different exponents of Italian thought:Gender, View, Childhood and Specularity ; Soul, Information, Melancholy and Language are the eight themes proposed so far. The stimulating nature of this choice provides for a transitory duration: the thematic layout must be able to be renewed periodically, giving space to new inspirations. This is why today the museum changes again, using the same scheme and involving four new professionals: the Professor of Aesthetics Federico Vercellone, the famous architect Massimiliano Fuksas, the President of FIAT John Elkann, the writer and journalist Luciana Castellina. I nfinito, Speed, Nature and Ethicsthey are the chosen routes, which follow the four corridors of the first and second floors, presenting some already exhibited masterpieces, along with new works from the collections, some of which are the result of the museum’s most recent acquisitions.

The first floor of the museum houses the Infinito, a theme proposed by Federico Vercellone, Professor of Aesthetics at the University of Turin, who thus writes in his text: “The infinite is said in many ways. It is the immensity of the celestial spaces, it is the infinity of the numerical series, that of love, and there are still many others. ” In this way, a theme is addressed that contemplates categories of investigation such as, among other things, “chaos, becoming, unlimited”. The work of art responds to this investigation between the finite and the infinite, made tangible in the romantic imagination by landscapes that recall the category of the sublime, with majestic scenarios, full of drama such as, for example, the thinning of a storm by Giuseppe Camino.

The Mirror of Lifedi Pellizza da Volpedo shows a procession of sheep that stands out against the distant horizon. We then move from the blue by Yves Klein conceived as the color of the absolute, to the white by Piero Manzoni considered by the artist a non-color that creates a sense of emptiness, a nothing that laps the idea of ​​infinity, up to the cuts and holes by Lucio Fontana, who bring the imagination to something “other”, intangible and indefinable, which lies beyond the canvas. The mirroring multiplies the image and makes it stretch to infinity, for this reason a room is dedicated to the famous mirror surfaces of Michelangelo Pistoletto. Finally, reality sometimes turns into a dream, which we perceive in the majestic landscapes of Humbaba and Einschüsse by Anselm Kiefer. 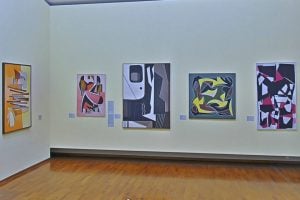 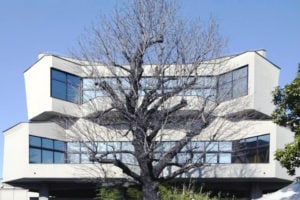 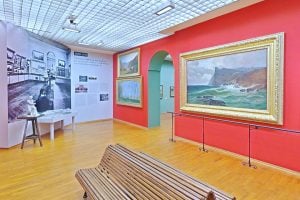 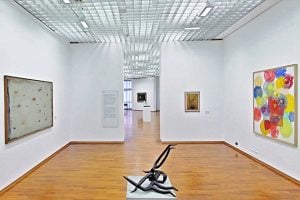 The new exhibition itinerary continues on the first floor, with the gallery dedicated to speed, a theme proposed by John Elkann, President of FIAT, who says: “The relationship between man and speed is a modern and at the same time very old theme”. Speed ​​”conditions action and thinking, follows a rhythm so rapid as to overcome nature, tending to infinity”.

It starts with the prologue dedicated to nineteenth-century painting which houses the “disheveled” and quick brushstrokes of the masterpieces of Tranquillo Cremona Benedetto Junck and L’edera, to then continue in the next room with modern paintings, which sees Hans Hartung and Karel Appel as a sign painting, which leaves impetuous traces on the canvas. Going through the speed told by the Andy Warhol car crash and the large wheel of chairs by Marc Andrè Robinson, you reach the room dedicated to rhythm, with the repetition of the abstract signs of Giuseppe Capogrossi and Carla Accardi. Futurism, which made speed the basis of its manifesto, is represented in the room dedicated to Giacomo Balla’s iridescent interpenetrations, next to Umberto Boccioni’s study for the city that goes up. The tour ends with the main symbol of speed: the car, well outlined here by Salvatore Scarpitta’s monumental Rajo Jack.

The second floor starts from the corridor and is dedicated to Ethics, a theme proposed by the famous architect Massimiliano Fuksas. The prologue dedicated to nineteenth-century works collects paintings in which the ethical theme is opposed to the vision of its opposite. The evil recounted by After the duel by Antonio Mancini and Giacomo Grosso’s cell of madness therefore acts as a counterpoint to the vision of absolute good, expressed with the moral action of renouncing the papal throne described in the Deposition of Pope Silverioby Cesare Maccari.

The ethics linked to architecture and the environment, a reflection on which Fuksas’s text is based, is represented in the second room, where Giuseppe Uncini’s sculptures in rough reinforced concrete mixed with iron seem to want to denounce the fury of man on the territory; report that A Christmas! At Pio Albergo Trivulzio by Angelo Morbelli he applies despair to the sad and anonymous room of hospitalization for the poor.

The urban landscape is finally summarized in the work of Mario Sironi as in that of Marco Tirelli, which outlines with essential lines a dense landscape made of vertical and horizontal. A breath of optimism offers Nicola de Maria further ahead than with his musical Kingdom of flowers, Universe without bombsfloods the path of color and music, and then fades later with the disturbing installations of Christian Boltanski. It continues with the masterpieces of Amedeo Modigliani and Antonio Canova, alongside a recent acquisition by Marina Abramović.

We then pass through rooms in which works are exhibited that refer to the ethics of history (Marino Marini and Luigi Mainolfi) until we reach the room dedicated to the works of Felice Casorati. It ends with the religious ethics represented by Innocenzo Spinazzi ‘s Religion, Scipio ‘ s Apocalypse and Hermann Nitsch ‘s Schüttbild.

The path ends with the theme Nature proposed by the writer and journalist Luciana Castellina, who describes nature itself as a “superabundant and metaphysical concept: in nature we are inside, but not really. And for millennia, we have been discussing where we are in relation to you. ”

The nineteenth-century prologue is entirely dedicated to the nostalgic, romantic and literary nature of Antonio Fontanesi, amidst rural atmospheres where time seems suspended and marked by the only rhythm of vegetation and light. Passing through the space that investigates the representation of essential natural elements (air, water, earth and fire) with the Praise of fireby Eduardo Chillida and the flame-flower by José Maria Sicilia in close dialogue with the still lifes of Filippo de Pisis and Mario Mafai, we continue in the room dedicated to Alberto Burri and Medardo Rosso, artists who even in different periods have characterized their research with the use of organic and natural materials.

The Arte Povera artists, represented in the next room with the works of Mario Merz, Giuseppe Penone and Gilberto Zorio, reflect with their works on the processes of transformation of nature: from the spontaneous biological growth of the Penone Tree of 5 meters, to the analysis of the alchemical processes of the star in bronze with acids and parchmentby Zorio. The “mechanical” or artificial nature becomes predominant in the art of Fortunato Depero, Alberto Savinio and Fernand Leger whose poetics are combined with more recent works, such as the polyurethane sculptures by Piero Gilardi and the recent purchase of the museum: Doppelpilzvitrine (showcase with double mushrooms) by Carsten Höller.

After a passage in which we find the return to the primordial origins of nature as a female divinity represented by the imposing sculpture by Arturo Martini, together with the informal-style depictions of the landscapes by Renato Birolli and Ennio Morlotti, the journey ends with the physical dimension and metaphysics of Still life with salami by Giorgio De Chirico in comparison with the baroque scenario of Sissi’s 4 laid tables, recent acquisitions.

Collection History
Torino was the first Italian city to foster a public collection of modern art as an integral part of its Civic Museum, which opened in 1863. The collections were originally housed with the ancient art collections in a building close to the Mole Antonelliana.

In 1895 they were transferred to a building near corso Siccardi (now corso Galileo Ferraris), which had been built years earlier for an art exhibition, and where there they remained until 1942.

After the building’s destruction during the World War II, the current building, designed by Carlo Bassi and Goffredo Boschetti, was erected on the same site and was inaugurated in 1959. The building later became unusable in the early 1980s and was opened to the public again in 1993 after extensive redevelopment.

The collections currently comprise over 45,000 works including paintings, sculptures, installations and photographs in addition to an extensive collection of drawings and engravings and one of the most important European collections of art films and videos. On the strength this array of holdings, the GAM keeps true to its original commitment to contemporary research and fosters on-going interaction between its historical works and contemporary cultural debate by developing its exhibition programme with a view to closely linking the present day and the historical collections.

The collection’s works have been arranged and change over time, so visitors can rediscover the collections and refresh their analytical approach to its masterpieces. Hence the work of the main Italian nineteenth century artists, like Fontanesi, Fattori, Pellizza da Volpedo e Medardo Rosso, and of twentieth century artists, such as Morandi, Casorati, Martini and De Pisis, can return to the present tense and display their depth through close comparisons with works of past international avant-gardes, of which the Museum holds important examples ranging from Max Ernst to Paul Klee and Picabia. It also holds works from post-World War II new avant-gardes and one of the most extensive collections of Arte Povera, including work by Paolini, Pistoletto, Zorio Anselmo, Boetti, Penone as well as contemporary art work, to which the Museum allocates considerable exhibition space.

GAM – the Civic Gallery of Modern and Contemporary Arts – is Italy’s oldest modern art museum. Since opening to the public in 1863 numerous masterpieces has been added to its collections over time. At present, GAM’s collections comprise over 47,000 works, ranging from paintings and sculptures to installations and photographic art, as well as a rich collection of drawings and engravings, and one of the largest artist’s film and video collections in Europe.

On the strength of this heritage, GAM continues to implement its original commitment to contemporary research by constantly linking its historical works with today’s cultural debate and ensuring that the exhibition programme is closely correlated with the collections. Works from the collections are exhibited in thematic groupings that change over time, ensuring that visitors always see the collections from a new angle and can make a fresh analysis of the Gallery’s masterpieces.

Works by both the leading Italian nineteenth-century artists, like Fontanesi, Fattori, Pellizza da Volpedo and Medardo Rosso, and the twentieth-century masters, including Morandi, Casorati, Martini and De Pisis, have reacquired their capacity to speak to the present, and to show off all their complexity on a par with works from the historic international avant-gardes, outstanding examples of which are also in the collection: from Max Ernst to Paul Klee and Picabia, as well as works by the new post-war avant-garde movements, with one of the largest collections of Arte Povera – including works by Paolini, Boetti, Anselmo, Zorio, Penone and Pistoletto – but also the current artistic output to which GAM dedicates extensive exhibition space.