The Permanent exhibition encompasses several facets of the African and Afro-Brazilian cultural universes, addressing themes such as religion, work, art, the African diaspora and slavery, and recording the historical trajectory and African influences in the construction ofBrazilian society.

With over 6,000 works, including paintings, sculptures, prints, photographs, documents and ethnological pieces, by Brazilian and foreign authors, produced between the 15th century and today, the collection encompasses several facets of African and African cultural universes. Brazilians. Currently, it is divided into 06 groups: Africa: Diversity and Permanence, Work and Slavery, Afro-Brazilian Religions, The Sacred and the Profane, History and Memory and Plastic Arts: the Afro Brazilian Hand. 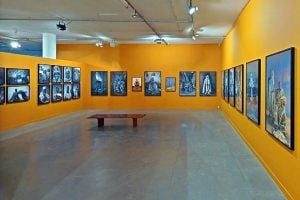 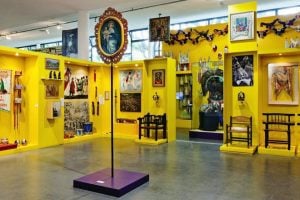 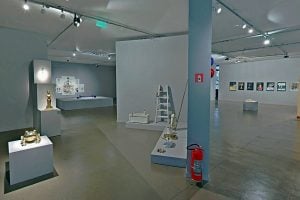 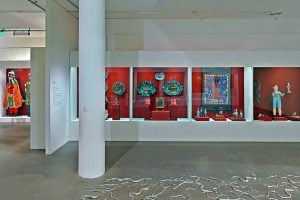 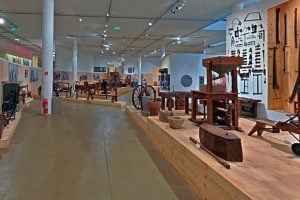 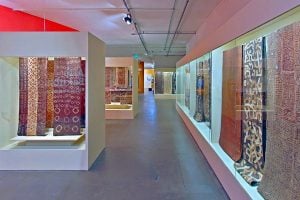 The exhibition of the Afro Brasil Museum collection intends to tell another Brazilian story. It intends to deconstruct an imaginary of the black population, built fundamentally from the perspective of inferiority throughout our history and transform it into an imaginary established in prestige, equality and belonging, thus reaffirming respect for a matrix population of Brazilianness.

Africa: Diversity and Permanence
Center dedicated to the cultural, historical and artistic wealth of African peoples. It exhibits works of the most varied functionalities and aesthetic conceptions, which demonstrate the technical competence of its authors and exemplify the immense diversity of that continent. The windows showcase everything from masks and figurines made of wood, bronze and ivory to clothes embroidered in gold threads, all from different countries and cultural groups such as Attie (Ivory Coast), Bamileque (Cameroon), Luba (Democratic Rep. Of Congo), Tchokwe (Angola) and Yoruba (Nigeria).

The core of the collection dedicated to the history, culture and art of Africa preserves a large number of objects, of the most diverse aesthetic concepts and functionalities, produced, mainly, by ethnic groups of the sub-Saharan nations, between the 15th and 20th centuries. There are works for ritual, magic or religious use (representations of gods and other divine entities, maternal figures linked to fertility rituals, figurines invested with medicinal power, etc.) and artifacts for everyday use (procession pipes, combs, reliquaries and elements furniture).

The materials used (wood, ivory, terracotta, fabrics, beads etc.) vary according to the source. Various cultural groups and countries are represented: Attie (Côte d’Ivoire), Bamileque (Cameroon), Yombe, Luba (Democratic Republic of Congo), Yoruba (Nigeria), among many others. The rich collection of African masks stands out, composed of pieces of admirable aesthetic sense and imbued with different symbologies, used in ancient cults and rites and as instruments of control and regulation of social order in numerous ethnic groups (Yoruba,ecóis, Bobo, Gueledé, etc.).

The nucleus also includes a series of works produced by European artists, covering important aspects of African historiography. There are Dutch maps from the 17th century, reproducing the African territory, ethnological lithographs produced by Rugendas, engravings and photographs depicting powerful figures from the African kingdoms of the past.

Labor and Slavery
Center that aims to highlight the knowledge and technologies brought by enslaved Africans in the field of work. In both rural and urban environments, the knowledge of Africans was decisive for the development of economic cycles. In addition to paintings, engravings and sculptures portraying part of these contributions, visitors can appreciate documents and other objects related to the world of work, such as cane grinders, sugar-making molds and tools by carpenters and blacksmiths.

This nucleus deals with the role of enslaved Africans and their descendants in the construction of Brazilian society, as a fundamental workforce in all the country’s economic development cycles. It retains iconographic documents that attest to both the brutality of this process and the gradual and silent assimilation by society of African values and customs arising from the diaspora. There are several lithographs by Debret and Rugendas, recording the punishments applied to slaves by their masters, the trips in the holds of slave ships and the forced labor in sugar mills.

The nucleus conserves several tools of carpentry, carpentry and other work instruments used by slaves, in addition to a series of instruments of torture and punishment, such as throats, paddles and turn-worlds. The nucleus also includes a series of photographs, by authors such as Marc Ferrez, Victor Frond and Virgílio Calegari, registering black slaves and freedmen in their trades.

Another important collection of this nucleus is made up of documents related to the African resistance to slavery and the participation of blacks in the Brazilian independence movements. There are quilombo maps from the 18th century, advertisements for rewards for capturing runaway slaves, artistic representations of black resistance leaders and personalities linked to the abolitionist movement, such as Zumbi dos Palmares and José do Patrocínio, performed by artists such as Alípio Dutra and Antônio Parreiras.

Afro-Brazilian Religions
Center dedicated to Brazilian religions and cults that have an African matrix. Worldviews and mythologies are highlighted through rich iconography, with emphasis on the pantheon of saints, orixás and other entities worshiped in Brazil. In the space reserved for the nucleus, clothing of Egungun and orixás, musical instruments, as well as paintings, engravings, sculptures, installations and photographs dedicated to the theme can be seen.

In addition to the appropriation and reinterpretation of elements present in Catholic festivities, slavery forced contact and coexistence between religions of different African peoples, resulting in a multiple assimilation of similar elements from their cultures. In this way, deities, rites and cults of different origins were merged into a common amalgam, which resulted in Afro-Brazilian religions. In this nucleus, pieces related to these religions, their characters and rites are preserved, ranging from sculptures and photographs to clothing and altars, dating from the colonial period to the present day.

Noteworthy are the various pieces related to Quimbanda, Xangô and, mainly, Candomblé – a religion of Yoruba origin, widespread throughout the Brazilian territory – such as statuettes of Iemanjá, Ibejis and ritual objects of orixás, produced in Brazil and in Africa, in its most diverse aspects (Kekes, Jejes, Angola, etc.). There are several specimens of balangandãs, jewels and amulets used by Bahian women on festive and ritual occasions. There is also an important set of photographs by artists such asPierre Verger, Mário Cravo Neto, Maureen Bisilliat and Adenor Gondim, documenting Afro-Brazilian religious rites.

The Sacred and the Profane
In this nucleus are represented festivities celebrated in Brazil, linked to the sacred and celebrated in the festive space of the street. Many of the popular Brazilian festivals, such as Congada and Maracatu, go back to the colonial period and were considered spaces of sociability used by enslaved Africans to celebrate their traditions and maintain their cultural identities. Thus, in several Brazilian festivals it is possible to find musical instruments of African origin, symbols related to ancient kingdoms of the continent, materialized in the nucleus through masks, flags and clothing.

In this nucleus, works related to the imposition of the Christian faith on black captives are preserved, largely documenting the subsequent religious syncretism that marks Brazilian society. Catholic festive celebrations – seen in the colonial period as major civic events and important instruments for the spread of Christian doctrine – provided social spaces for African slaves and their descendants to appropriate these festivities, often adapting Catholic symbolism to their cultural references. and rites of origin.

A large number of prints, watercolors and photographs stand out in the collection, documenting both religious parties of popular Catholicism and Afro-Brazilian confraternities (parties of Nossa Senhora do Rosário, Divino and the Irmandade da Boa Morte) as well as ” folkloric ” celebrations. of black influence (congadas, maracatu, bumba-meu-boi, coronation of the black kings, etc.), in addition to the adornments, masks, objects and clothes used in these festivities. The cult of black saints, such as Santo Elesbão, Santa Ifigênia and São Benedito, is represented through an imaginary selection from the colonial period. Also important is the large collection of ex-votos – imaginary imbued with votive intentions, whether magical or religious, widely produced in Colonial Brazil.

History and Memory
Center dedicated to the history and memory of important black personalities who stood out in several areas of knowledge, from the colonial period to the present day. Photographs and documents exalt the trajectory of writers such as Carolina Maria de Jesus, author of the book Quarto de Despejo; from the engineers of the Rebouças family, in addition to other notables such as Teodoro Sampaio, an important geographer and architect whose name was attributed, in his honor, to a well-known street in São Paulo.

The nucleus is also composed of material testimonies of the historical evolution of blacks in Brazil. There are objects and documents that report the involvement of blacks in historical episodes such as the Battle of the Guararapes, the Levante dos Malês, the Paraguayan War, the Chibata Revolt and the 1932 Revolution. There is a vast iconography about the 19th century abolitionist movement, as well as a significant sample of essays and periodicals produced by the black press in Brazil in the 19th and 20th centuries (collections of newspapers such as A Liberdade, A Voz da Raça and O Clarim d’Alvorada, among others).

Plastic Arts: from the Afro Brazilians Hand
The Plastic Arts Center exhibits works that span different periods of art in Brazil, from the Baroque and Rococo, the 19th century and academic art, as well as Popular Art, Modern and Contemporary Art. Among the artists on display are Estevão Roberto da Silva and contemporary artists Rosana Paulino, Rubem Valentim, Mestre Didi, among others. In the midst of contemporary productions, works by African and African-American artists, such as Gerard Quenum, Zinkpé and Melvin Edwards, are also shown.

This nucleus preserves important examples of the black presence throughout the evolution of the arts in Brazil. It mainly preserves works of art executed by black and mulatto artists, but also includes pieces that have the black universe as their theme. It is noticeable and well documented the strong presence of black artists during the colonial period, which would end up defining Brazilian art in a definitive way. In the museum’s inventory of gems, sculptures by Aleijadinho and Mestre Valentim, and paintings by José Teófilo de Jesus, Frei Jesuíno do Monte Carmelo, Veríssimo de Freitas and Joaquim José da Natividade are preserved.

With the institution of official education by the Imperial Academy of Fine Arts (closely associated with the formation of the country’s economic elite), the black contribution to national art significantly diminished. Even so, important examples of this current are preserved, represented in the collection by the still lifes of Estêvão Silva, in the portraits made by Antônio Rafael Pinto Bandeira and Emmanuel Zamor, in the landscapes by Antônio Firmino Monteiro and in the vast set of paintings executed by the João brothers and Artur Timóteo da Costa (self-portraits and portraits of blacks, navies, landscapes and studies of nudes, among others).

In the segment referring to 20th century art, there is a set of paintings by Benedito José Tobias, several serigraphs and sculptures by Rubem Valentim, and other works by Heitor dos Prazeres, Ronaldo Rêgo, Octávio Araújo, Manuel Messias, Joseph Pace, Caetano Dias, José Igino, Tibério, Jorge Luís dos Anjos, among others. Finally, there are representative sets of Afro-Brazilian popular art, where the works of Mestre Didi stand out, and a collection of artistic photographs, by names such asMadalena Schwartz, André Vilaron, Eustáquio Neves, Sergio Valle Duarte, Walter Firmo, Alfred Weidinger among others.