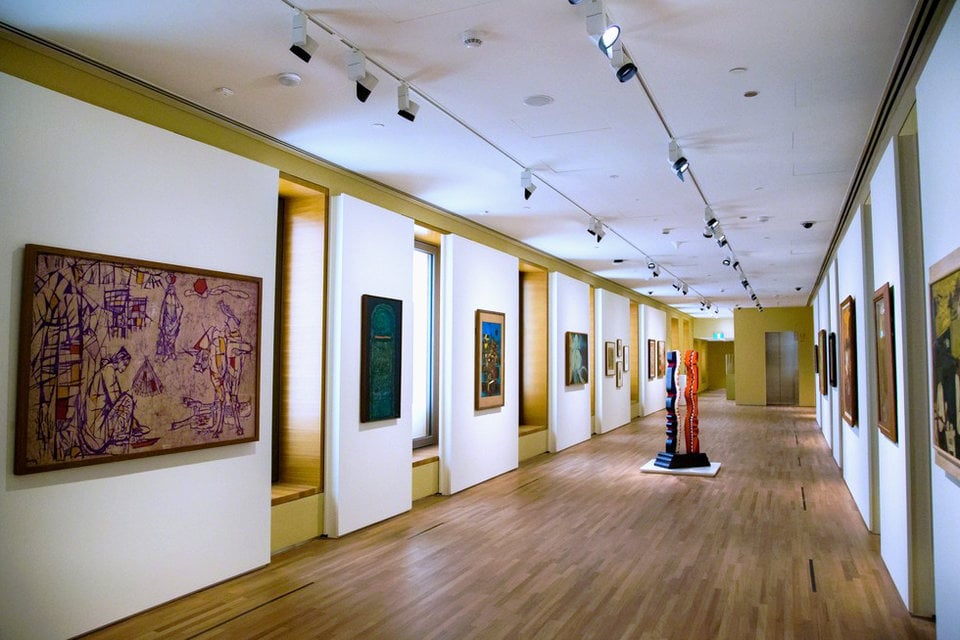 Manifesting the Nation, Between Declarations and Dreams, Art of Southeast Asia since the 19th Century, National Gallery Singapore

Manifesting the Nation: Realities and Realisms (1950s to 1970s). One of the most significant developments in the history of modern art in Southeast Asia occurred during 1950s to 1970s. During and after World War II, artists documented political events and issues, and used the style of social realism to awaken feelings of nationalism. At the same time, artists were also eager to be part of the international trend of abstract art. This took place at a time when artists were searching for a national identity as many countries across Southeast Asia gained their independence. Manifesting the Nation exhibition in the UOB Southeast Asia Galleries 6 – 11 (on level 3).

The pre-dominance of “academic Realism” was challenged as the region went through seismic socio-political changes. This laid the foundations for the emergence of genres like Social Realism and Socialist Realism. What were the differences between these Realisms? And how do we even begin to understand the development of these different genres in relation to the history of art in Southeast Asia? Realism and its Tendencies in Southeast Asia I have studied, apart from the preconceived system

This theme represents the most extensive, and most diverse, grouping of artworks within “Between Declarations and Dreams,” ranging from heartfelt social realism to the politicized anti-authoritarianism of the late 1970s. The Second World War triggered political upheaval throughout the region, where in its aftermath, as many countries gained independence, artists tackled concepts of nationalist identity.

Much of the imagery in “Manifesting the Nation” is a straightforward documentation of social and economic change, including, for example, crowds gathering for elections and land being torn up for mining. Allegiance to a national ideal is also portrayed here, embodied by perhaps one of the best-known paintings in Singapore’s national collection, Epic Poem of Malaya (1955), by Chinese artist Chua Mia Tee, a much-referenced work which presages an autonomous Malaya (a federation of local states, then protectorates of the United Kingdom, which later gained independence and became Malaysia). Further allusion to newfound patriotism is made by Indonesian artist S. Sudjojono in his 1965 oil painting Kami Present, Ibu Pertiwi (Stand Guard for Our Motherland).

Early forays into abstraction hang alongside these more literal works. The unearthly forms in Hernando R. Ocampo’s Dancing Mutants (1965) are at once gorgeous evocations of the artist’s native Philippine flora and color and a cautionary vision of an atomic fallout. Many artists of this time sought to infuse their work with indigenous motifs; others were inspired by traditional mediums. Chinese-born Chuah Thean Teng was the first artist in Malaysia to use traditional batik in creating modern paintings. His loosely figurative Morning (1960–63) is complemented by the later, more conceptual batik-work by Singapore’s Jaafar Latiff, titled Wandering Series 8/79 (1979).

As for painting, Malaysian artist Latiff Mohidin’s “Pago Pago” series revels in regional iconography. In the oil work Pagodas II (1964), from his aforementioned series, the artist engulfs his canvas with the characteristic forms of a mosque and pagoda, both outlined in colorful patterns. Familiar marketplace and village imagery inspired many during these decades, as seen in the deconstructed forms of Sudjana Kerton’s undated Kehidupan de Kampung (Village Life).

Continuing chronologically, the works in the “Manifesting the Nation” section unfurl into full-on abstraction. One particularly spacious gallery includes paintings by Singapore’s Jolly Koh (Fan Fern, undated) and Jose Joya from the Philippines (Hills of Nikko, 1964), as well as several sculptures, including the spiky amalgamation Untitled (c. 1960s) by J. Elizalde Navarro, another Filipino artist.

To conclude this particular thematic section of the exhibition, a final gallery is filled with posters, sketches and other works dating from the 1970s, all reflecting regional and local conflict, including the Vietnam War. The sculpture Kinupot (1977) portrays human forms struggling inside a sack, by Edgar Talusan Fernandez of the Philippines, which alludes to activist dissent under his country’s martial law. Other paintings here include the powerful Massacre at Mylai (After Haeberle’s) (1970) by Singapore’s Teo Eng Seng and the conciliatory You, Gun and Flower (1972) by Vietnamese artist Tran Trung Tin.

Between Declarations and Dreams: Art of Southeast Asia since the 19th Century
What defines Southeast Asia and its art? From historical artefacts to contemporary perceptions of such objects, “Between Declarations and Dreams” traces the circuitous route of the region’s art, from its connection to 19th-century colonialism to its current reformulations of heritage, aesthetics and identity. The artistic journey through these galleries is a beautifully articulated progression, and the collection here establishes a lucid and distinctive framework for the Gallery’s fundamental aim: to advance the scholarly discourse on the history of Southeast Asian art. Given its detailed historical analyses and eclectic visual palette, “Between Declarations and Dreams” may best be savored over multiple visits.

Starting in the mid-19th century, the exhibition navigates the art history of Southeast Asia as one that is characterised by a continuous encounter with the new as the regions artists negotiated the meaning of art and sought to reinvent vernacular expressions and aesthetics. Presented in a largely chronological sequence and punctuated by key turning points in artistic sensibilities, the exhibition also identifies how art is inseparably linked to the region’s tumultuous social and political history.

The title of the exhibition is credited to one of Indonesia’s most cherished poets, Chairil Anwar. In his poem of 1948, “Krawang-Bekasi”, Chairil Anwar laments the massacre of villagers in West Java by the Dutch colonial forces, giving vent to the desire for national independence at the time. This line may also be said to encapsulate the experiences of many artists in the region, caught as they are between declarations and dreams, the personal and the political.

The curatorial narrative explores four main themes places in a broadly chronological sequence, each one critically examining the shared artistic impulse of the region for each period: Authority and Anxiety, Imagining Country and Self, Manifesting the Nation, and Re:Defining Art.

This exhibition contains some artworks with potentially sensitive imagery. Visitor discretion is advised.

National Gallery Singapore
National Gallery Singapore is a leading visual arts institution which oversees the world’s largest public collection of Singapore and Southeast Asian modern art. Situated at the birthplace of modern Singapore, in the heart of the Civic District, the Gallery is housed in two national monuments – City Hall and former Supreme Court – that have been beautifully restored and transformed into this exciting 64,000 square metres venue. Reflecting Singapore’s unique heritage and geographical location, the Gallery aims to be a progressive museum that creates dialogues between the art of Singapore, Southeast Asia and the world to foster and inspire a creative and inclusive society. This is reflected in our collaborative research, education, long-term and special exhibitions, and innovative programming. The Gallery also works with international museums such as Centre Pompidou, Musée d’Orsay, Tate Britain, National Museum of Modern Art, Tokyo (MOMAT) and National Museum of Modern and Contemporary Art, Korea (MMCA), to jointly present Southeast Asian art in the global context, positioning Singapore as a key node in the global visual arts scene.

National Gallery Singapore oversees the world’s leading public collection of modern art from Singapore and Southeast Asia. It comprises over 8,000 works from the 19th and 20th centuries in all media, including painting, sculpture, printmaking, photography and video.

Aiming to be the centre for research, discussion and publication on the modern art of the region, the Gallery offers wide access and fresh understanding of our unique visual art heritage.

With its comprehensive collection, the Gallery presents the development of Singapore and regional cultures to tell their social, economic and political histories. The Gallery looks beyond national and regional boundaries of art to include a wider ambit of international visual arts culture, research into Asian heritage and cultural affiliations, and engage with global cultures and discourses.