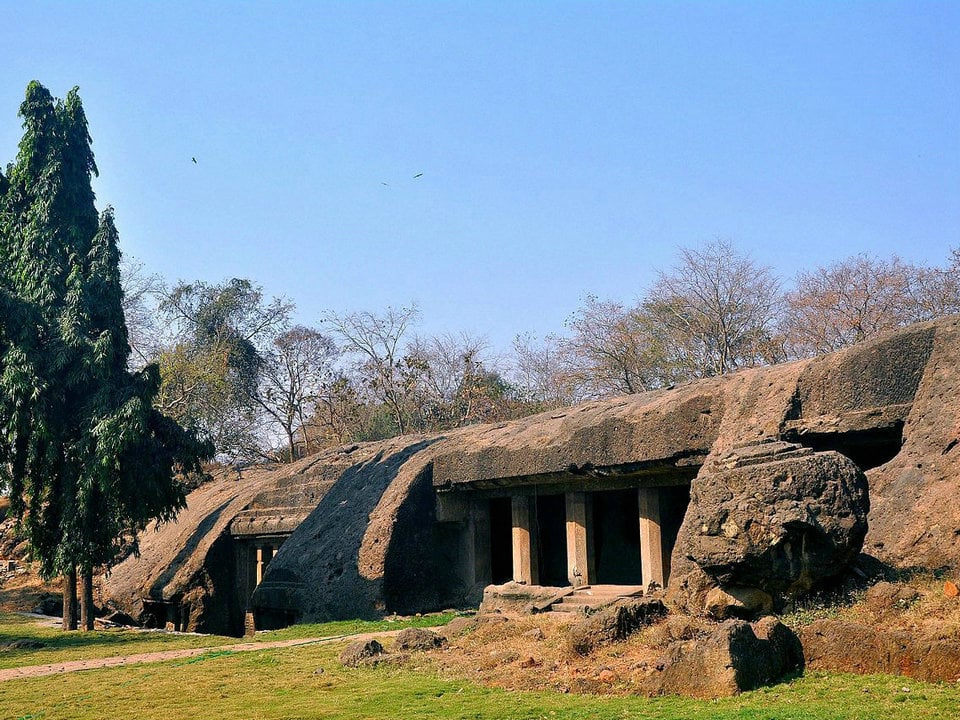 This Buddhist monastery is located in the eastern suburb of Andheri in the city of Mumbai (Bombay) in western India. Monument consists of two groups of rock-cut caves – 4 caves more to the north-west and 15 caves more to the south-east. Most caves are viharas and cells for monks, but Cave 9 of south-eastern group is chaitya. Caves in north-west have been created mainly in 4th – 5th century, while south-eastern group is older. Monument contains also rock-cut cisterns and remnants of other structures.

Caves are carved out of a solid black basalt rock,(volcanic trap breccias, prone to weathering).

The largest cave at Kondivite (Cave 9) has seven depictions of the Buddha and figures from Buddhist mythology but all are mutilated.

It is located near the junction between the Jogeshwari-Vikhroli Link Road and SEEPZ. The road that connects these monuments to Andheri Kurla Road is named Mahakali Caves Road after it. The caves are located on a hill that overlooks the Jogeshwari-Vikhroli Link Road and the SEEPZ++ area. A Direct bus run by the BEST links the caves with Andheri station. The caves was in danger of being encroached upon, now it is steel fenced on the road side and walled on the hill side.

Location
The Mahakali Caves are located in the coastal foothills of the Western Ghats near an ancient trade route about 35 km north of today’s center of Mumbai in the suburb of Andheri . The Andheri Railway Station or the Jogeshvari Railway Station are easily accessible by suburban trains; the remaining approximately 3 km to the east are best done with taxis or motor rickshaws. The neighboring Hindu Jogeshwari Caves are only about 3 km (drive) northwest.

Dating
Building inscriptions are largely absent – but the archaeologists have reasons to believe that the 19 caves in the period from the 1st century BC. Originated until the 6th century AD. About client and founder is also almost nothing known. The only and poorly preserved inscription in the Hall of Worship ( chaitya ) translates roughly as follows: “foundation of a vihara together with his brother of Pittimba, a Brahmin and Gautama -director; a resident of Pachi Kama. ”

Caves
The two groups of the Mahakali Caves (four caves in the northwest and 15 caves in the southeast) were carved out of the volcanic granite rock of the Dekkan-Trapp together with the pillars , the stupa , the monk cells and the figural reliefs. Overall, they do not reach the architectural and artistic quality of some of the caves in Ajanta and Ellora . Most caves are slightly raised for protection against floods ( monsoon rain ) and free-range animals and can only be accessed via steps carved into the rock.

Caves 1-3 form an architectural ensemble of viharas , but Caves 1 and 3 have remained unfinished. The also not quite finished cave 2 has in addition an upstream and by relief stone fences ( vedikas ) separated from the outside world portico ( mandapa ) behind which – again slightly raised – is the actual living hall. Above the portico and above the portal between the portico and the hall are small ‘moon windows’ ( chandrasalas ). The square pillars of the vestibule are undecorated; its capital zone is marked only by notches. A small votive stupa is carved into the back wall of a deeply hollowed-out side chamber; in front of it is a kind of altar stone, which can also be interpreted as an empty throne seat Buddha . Overall, the simple architecture with its vedikas , as well as the almost missing ornamentation on an early date (2nd / 3rd century) out.

Cave 4 is the largest of all viharas of Mahakali. The lateral rooms, separated from unaccompanied octagonal pillars, are slightly elevated from the actual hall.

Cave 5 is probably the oldest component among the Mahakali Caves; a former vestibule has largely been demolished. It is a worship hall ( chaitya ) with a wall segment separated by two rounded and broken by jali windows separated space for the aniconic stupa with a diameter of 2.35 m and a height of approximately 4 m, the monks ( in later times perhaps also by high-ranking or wealthy persons) in a pradakshina ceremony could be bypassed. As unusual as the architecture of the Chaitya Hall, which can only be roughly compared to two caves ( Lomas-Rishi-Cave and Sudama Cave ) in the Barabar Hills in the state of Bihar, about 1,500 kilometers away, the two Jali windows, which are next to a similar window in the approximately 120 kilometers south-east located cave shrine of Bhaja – probably the oldest surviving windows of their kind in India: The horizontal and vertical grid elements are slightly offset in succession, which suggests the willingness to imitate wooden models in stone. In the right wall there is a profound bas-relief (5th / 6th century) depicting a seated Buddha, accompanied by two standing bodhisattvas ( Padmapani and Vajrapani ). Smaller buddha figures in different sitting positions and hand postures ( mudras ) are mounted above. To the right of it, in a pronounced contraposto, is another Bodhisattva figure with a lotus- meditating Buddha above her-ruined-head; even further to the right are again small Buddhas in ‘European sitting’.

Caves 6-12 have remained unfinished or poorly preserved. In cave 6 there is a beautifully designed portal to the actual sanctum chamber ( garbhagriha ).

Cave 13 is a combined residential and cultic cave consisting of a vestibule and a main hall supported by four pillars, adjoining which are adjoining rooms, one of which contains a Buddha image. The pillars of Cave 13 with their amalaka capitals are far more mature than those in the other caves, suggesting a later dating.

The caves 14-19 are rather poorly preserved and offer no more architectural or artistic features.