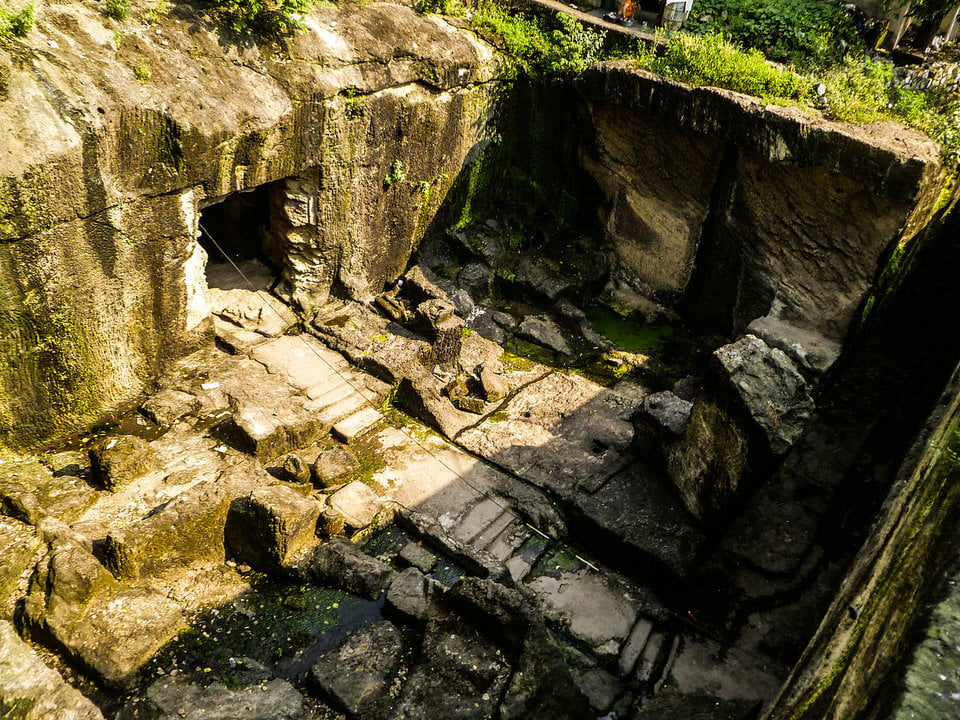 The Jogeshwari Caves are some of the earliest Hindus and Buddhist cave temples sculptures located in the Mumbai suburb of Jogeshwari, India. The caves date back to 520 to 550 CE.[citation needed] These caves belongs to the last stage of the Mahayana Buddhist architecture, which later taken by Hindus. According to historian and scholar Walter Spink, Jogeshwari is the earliest major Hindu cave temple in India and (in terms of total length) “the largest”.

The caves are located off the Western Express Highway, and are surrounded by encroachments. The caves are accessed through a long flight of stairs into the main hall of this cavernous space. It has many pillars and a Lingam at the end. Idols of Dattatreya, Hanuman, and Ganesh line the walls. There are also relics of two doormen. The cave also has a murti and footprints of goddess Jogeshwari (Yogeshwari), whom the area is named after. The goddess is considered a Kuladevi by some Marathi people, and also worshipped by some migrant groups from Gujarat.

Toponym
The name Jogeshwari is the feminine form of Jogeshwar and refers to Shiva as the Lord ( ishvara ) of the yogis. Jogeshwari (also Yogesvari written) is sometimes counted among the ‘mothers’ ( matrikas ) circle.

Location
The Jogeshwari Caves are located in the coastal foothills of the Western Ghats near the old trade routes between the highlands of the Deccan and the coastal foothills or the port cities already known in ancient times about 30 km northeast of today’s center of Mumbai. The Jogeshwari Railway Station in the same suburb is easily accessible by commuter trains; The remaining distance of about 1 km in northeastern direction can be covered on foot or with a motor rickshaw . The neighboring Mahakali Caves are located only about 3 km (drive) southeast of Andheri .

Dating
Inscriptions are not present or preserved in the caves. From stylistic comparisons with other caves near Mumbai – including Elephanta – the complex is mostly dated to the second half of the 8th century; even earlier dates are sometimes found.

Caves
The access to the caves leads through a passage of about 2 meters wide and 15 meters long carved into the rock, at the end of which a staircase leads down to two rock chambers. The right may contain a barely identifiable sitting Shiva figure with a guardian or donor figure at his side; the left chamber is even worse preserved and could have shown the figure of a dancing Shiva ( nataraja ). In the further course, a courtyard with an imposing row of pillars opens, on the opposite side of which is one of the largest Hindu rock temples in India in terms of surface area, whose annex building is subdivided by two pillar or column rows with amalaka capitals leading to the ‘Cella’ ( garbhagriha ): In the cella is the – barely recognizable and probably later erected cult image of the Jogeshwari. The reliefs in the outer wall of the cella seem to be significantly older – they are stylistically related to those of Elephanta.