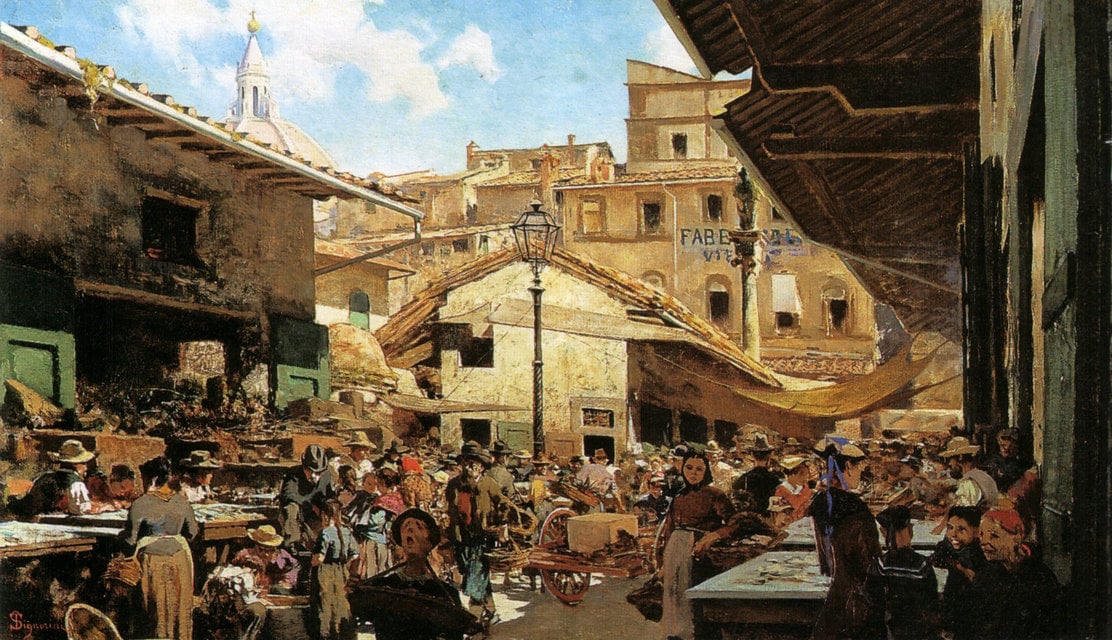 Markets of Palermo attracts significant numbers of tourists each year and is widely known for its colourful fruit, vegetable and fish markets at the heart of Palermo, known as Vucciria, Ballarò and Capo.

Palermo is Sicily’s cultural, economic and tourism capital. It is a city rich in history, culture, art, music and food. Numerous tourists are attracted to the city for its good Mediterranean weather, its renowned gastronomy and restaurants, its Romanesque, Gothic and Baroque churches, palaces and buildings, and its nightlife and music.

Mercato, the market, at the heart of the city
The market, beating heart of the city, not by accident located at its centre, is a privileged place of encounter between demand and supply. It can be seen historically as an “omphalos” around which the social organisation of community is structured and materialises, the inherent principle of reciprocity is confirmed and the cyclical nature of human experience finds assurance through the alternating presence there of products offered as objects requested, contested or demanded.

It is no accident that markets function effectively as synthetic and synesthetic examples of actual life, where events unfold like a performance in a realist drama, representing people, ritual practices, forms of recreation and social articulations of extraordinary effectiveness.

In markets, particularly those of Sicily, the level of expression become fully sublime through traditional forms of display and advertising presented by the skilled vendors and hawkers through the “paratura ra putia” (preparation of the store). Market people show practical “set design” and “aesthetic” skills in setting up the structures, often pyramids, used to display their merchandise, as well as “rhetorical” and “singing” abilities to sell their goods, mostly food, whose qualities they highlight through complex metonymic, metaphorical and allusive forms.

The composite soul of Palermo is effectively represented in its four main markets: Ballarò, Capo and Vucciria (within the walls) and Buorgu viecchiu (outside the city walls).

Mercato Ballarò
Ballarò, the largest of Palermo’s markets, is located in the Albergheria district between Corso Tukory, Via Maqueda and Corso Vittorio Emanuele, with its main concentration in Piazza Carmine and Piazza Ballarò. In view of the substantial economic changes that have affected the city, for the local inhabitants, Ballarò market still retains its functional importance as a place of commerce, a space of identities and an area for food products.

The permanent market stretches from Piazza Professa House to the Tukory Corridor ramparts towards Porta Sant’Agata. The market is famous for selling the first fruits coming from the Palermitan countryside. Ballarò is the oldest in the non-source city markets, attended daily by hundreds of people, animated by the so-called lying, that is, by the loud recalls of the sellers who, with their characteristic and colorful local accent, seek to attract interest of passers-by. It looks like a stack of stalemate stalls and the road invaded by the wooden boxes containing the goods that is constantly shouted, fired, singled out to advertise the good quality and good price of the products. Ballarò is a mainly food market, mainly used for the sale of fruit, vegetables, vegetables, meat and fish, but there are also household items for home cooking and cleaning, as in Cape and Vucciria markets.

Mercato Capo
Porta Carini is both the physical and symbolic entrance to Capo market, which extends from behind the Tribunale di Palermo between Via Porta Carini, Piazza Capo, Via Cappuccinelle and Via Beati Paoli. The market, specifically for fruit and vegetables, extends on the south side along Via Sant’Agostino, where it specialises in the sale of textiles.

The Cape market, along with other Palermo markets such as Ballarò, Vucciria, Lattarini and the Pulc Market, is an important retail food retail outlet. It is a very animated and characteristic, even folkloristic, food market: the colors, the screams of the sellers, the animation of the stalls make it an essential element of the character of the city of Palermo. It is an active market every day, giving you the opportunity to buy both groceries and other merchandise. It extends along Via Carini and Via Beati Paoli, Via Sant’Agostino and Via Cappuccinelle.

The Augustinians used to populate this area because they had their seat in the convent next to the 14th-century church of Sant’Agostino. One of the main entrances to the market is Porta Carini, in which is the Palace of Justice. Characteristic is the name of some of the streets that are in this area: via “Flying chairs”, via “Scippateste”, via “Gioia mia”.

Mercato Vucciria
Vucciria is a well-known historical market in Palermo, along with other named Ballarò, Capo, Flea Market and Lattarini.

Over the centuries Vucciria underwent several changes. Vicar Caracciolo in 1783 decided to change its appearance, particularly its main square, which was named after him in his honor. Around the square were built porches that housed the sales desks and a fountain was installed in the center. It is impossible to describe all the characteristic smells that pervade the place, although the typical smell of fish is certainly the most intense.

Within the market area are noble palaces and artworks such as Palazzo Mazzarino, belonging to the famed Cardinal’s family, Garraffello fountain, Gravina Filangeri palace of Rammacca al Garraffello.

Vucciria market extends between Piazza San Domenico and Corso Vittorio Emanuele. The heart of the market is Piazza Caracciolo, site of the city’s largest slaughterhouse during the Angevin period, which characterised the site as a commercial space for the sale of meat. No trace of this can now be seen, as the market has been reorganised as a space for the sale of vegetables and fruit.

Moving inside the dense weave of alleyways and piazzas of the Vucciria market you can find all the ingredients of Sicilian cuisine; the colorful stalls overflow with wooden boxes that, thanks to the colors of the merchandise, are transformed into lavish gold-cut jewels of lemon, silver of fresh and salty sardines, bronze of olives and coral of dried tomatoes.

Spectacular the pyramids of cuckoo, green broccoli, bunches of tenerumi. In the summer the scene of this great street theater sees as the absolute protagonists the water mills and the big watermelons with the sliced ​​belly and bare.

In boiling pots, boiled oysters are dumped, seasoned with only one splash of lemon. Salty sardines are cleaned in front of customers’ eyes. Features are also grilled stigghiole and panes.

Since the year 2000 Vucciria has become one of the sites of the Palermo Movida, from late afternoon and late into the night. You can find so many locals selling drinks at a lower cost than other local areas, and corners where street food is sold, sandwiches with breadcrumbs, and crocchè to spice, spit, and octopus.

Mercato Borgo Vecchio
Buorgu viecchiu market is located outside the ancient walls of the city of Palermo, in the fishing village of Saint Lucia, between Piazza Don Sturzo, behind the Politeama theatre, and the port area of ​​Palermo. Its proximity to the port favoured the development of this market as a place for the storage of merchandise.

The Old Market was an area of ​​Florence that was demolished, together with the old Ghetto, between 1885 and 1895 for the creation of the square of the Republic, with the aim of the so-called “rehabilitation” of the citizen.

The old market before demolitions, as it appeared in a glimpse of the current street Strozzi
On this site was the ancient Roman forum of Florentia. The area had a highly symbolic value as it was the geographical center of the city where the thistle and decumanus intersected. At this intersection there was the column that was later replaced by the abundance column, still existing.

In the Middle Ages, the area continued to be a meeting place, becoming soon the most important marketplace in the city. It was characterized by two ancient churches dating back to the Early Christian period, called Santa Maria in Campidoglio and Sant’Andrea. The market was only institutionalized after the year one thousand. Typically, even in other Italian cities, this was how to define public space for commerce, opposed to a square of the Cathedral for religious affairs and a square of the Commune (Piazza della Signoria) destined for politics and civil affairs. Over time, a second market was needed, the Mercatum de Porta Sanctae Mariae, from the name of the Santa Maria gate, where, in the sixteenth century, the New Market Lodge was built (as opposed to the market since then called “Old”).

The square still existed at Cosimo I’s time when Giorgio Vasari made the Loggia del Pesce, but gradually the space was increasingly thinner for the construction of tiny popular buildings, used as a workshop and home, which had changed l ‘aspect of the area. It was typical in the Middle Ages to dwell in the buildings where the workshop and the lab were also located. In addition, the area was dotted with wells, ovens, churches, towers, lodges, wooden houses or masonry.

Numerous were the names of areas linked to economic activities: Piazza dell’Olio, via dei Pellicciai (Via Pelliceria), Via delle Ceste, Piazza delle Cipolle (now Piazza Strozzi), Piazza del Vino, piazza delle Ricotte. The tavernai loggia sold food, while the tabernacle of Santa Maria della Tromba was called because it was close to the shops of the casting and trumpet manufacturers.