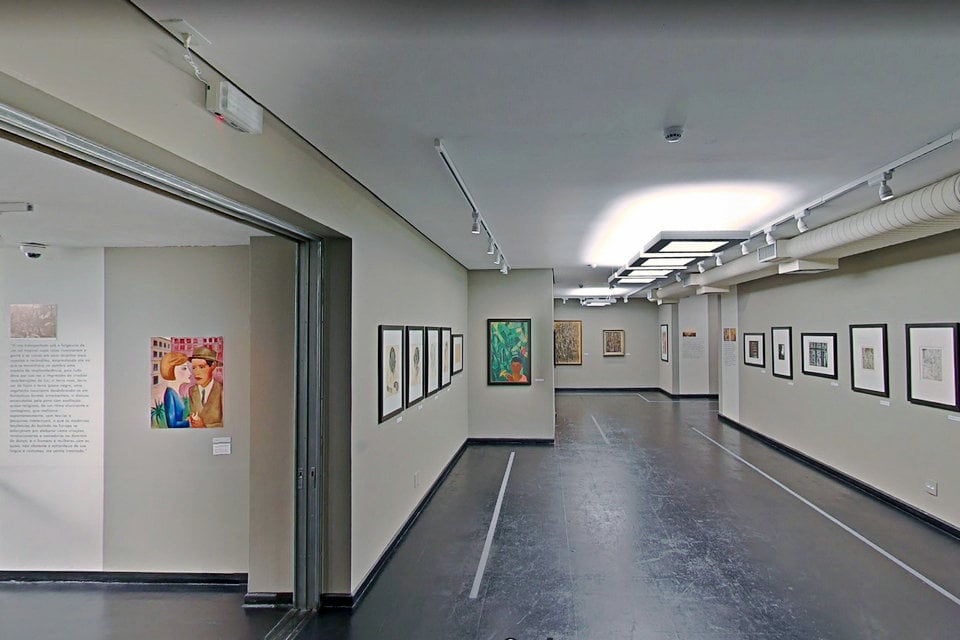 This Exhibition presents an overview of Lasar Segall’s production, with a special focus on the “Brazilian Stage” and its developments, without leaving aside important periods and trends, such as his initial production, strongly influenced by impressionism and the expressionist period, even works by late 1950s. The exhibition also features objects from his studio and residence, as well as texts by the artist, contextualizing each period covered.

The texts, elaborated throughout his career, reveal his worldview and how he conceived the role of the artist and the arts in society. They were edited in full in the publication Museu Lasar Segall / Brazilian Institute of Cultural Heritage. Lasar Segall: texts, testimonials and exhibitions(2. ed. Aum. São Paulo: Museu Lasar Segall, 1993). His comings and goings are part of his personal and artistic journey. Themes such as emigration, forests and portraits, the Mangue carioca are worked on and reviewed, reinforcing identities, singularities and social injustices. Segall is a multiple artist, with recurring aesthetic, thematic and expressive transitions throughout his production. Sensitive to the main historical facts, which occurred in the first half of the 20th century, his art largely reflects a critical view of Western society and its directions.

Arriving
Son of a Torah scribe (The Pentateuch) , Segall was born in Vilna, Lithuania, in 1889. From that period, Segall recalls: “[…] what fascinated me the most was watching how my father copied the ‘ Log’. With a deep black ink, from the blackness of pitch, which he prepared himself, the monumental Hebrew characters formed on the white or yellowish parchment, which he also prepared. I, too, tried to draw these letters, paint them, enrich them with ornaments of my invention ”.

Departing
In 1906, goes to Berlin, Germany, and entered the Academy of Fine Arts. Segall, as a foreigner, reports his arrival “[…] I found myself in a world that was completely foreign to me; other people, other customs, another language. It seemed to me that I fell on an unknown planet, so different was this world from the one in which I grew up […] ”.

Arriving
In 1910, he moved to Dresden, Germany, where he attended the Academy of Fine Arts. This is one of the main periods in Segall’s life, during which he perfects his technique, actively participates in the expressionist movement and lives with countless personalities from the world of the arts. In 1912, he traveled to Holland.

Departing
meeting with Brazil. First trip in 1913, when he exhibited his work in São Paulo and Campinas. Return to Dresden. In 1914, with the start of the First World War and the conflict between Germany and Russia, Segall was expelled from the Academy and remained until 1916 in Meissen, a city near Dresden. At the end of 1916, he returned to Vilna and found the city destroyed by the war. Given this scenario, he makes a series of prints and drawings. Return to Dresden.

Arriving
In 1923, he returned to Brazil where he took up residence in São Paulo. He knows Rio de Janeiro and is enchanted by its geography and population. During this period, he executed several drawings and prints by blacks, slums and conceived the series “Mangue”, which he finished later in Paris. He begins his series called “Fase Brasileira”, temporarily replacing ocher, gray and black with red, green and yellow.

Departing
In 1928, he traveled to Paris where he stayed until 1932. In this phase, he began to produce his first sculptures. In 1929, he visited Kandinsky, Lyonel Feininger, Marcel Breuer and Moholy-Nagy, at the Bauhaus in Dessau, Germany.

Arriving
Returning to Brazil, he takes up residence at Rua Afonso Celso, currently the headquarters of the Lasar Segall Museum.

Back and forth
In 1935, between São Paulo and Campos de Jordão (SP), the artist performs large series, such as his “Forests”, strongly influenced by the local nature. Mário de Andrade, his most important critic, praises this period as “a feeling of serious serenity, of a silent life”.

Departing
Segall dies on August 2, 1957 at his residence. In 1967, at Rua Afonso Celso, at the initiative of the widow Jenny Klabin Segall and the sons Mauricio and Oscar, the Lasar Segall Museum was created.

Lasar Segall Museum
The Museu Lasar Segall, idealized by Jenny Klabin Segall – the widow of Lasar Segall – was created as a non-profit association in 1967 by her sons Mauricio Segall and Oscar Klabin Segall. It is housed in the artist’s former residence and atelier, designed in 1932 by his brother-in-law, the Russian-born architect Gregori Warchavchik. In 1985, the Museum was incorporated in the Fundação Nacional Pró-Memória, now integrating the Instituto Brasileiro de Museus – IBRAM of the Ministry of Culture, as a special unit. In addition to its museum collection, the Museum is a center for cultural activities, offering programs of guided visits, courses in the areas of engraving, photography and literary creation, cinema projection, and also houses a large library specialized in performing arts and photography. The Museum, as a federal body, is supported by the Associação Cultural de Amigos do Museu Lasar Segall – ACAMLS, a non-profit civil society, made possible by the collaboration of public and private institutions, as well as individuals who cooperate with the Museum.

Created by Lasar Segall’s widow, Jenny Klabin Segall, the Lasar Segall Museum was created as a non-profit civil association in 1967 by the couple’s children, Mauricio Segall and Oscar Klabin Segall. The former residence and studio of the artist, designed in 1932 by his brother-in-law, architect Gregori Warchavchik, houses the institution. In 1985, the Museum was incorporated into the National Pro-Memory Foundation, and today it is a unit of the Brazilian Institute of Museums – Ibram, an autarchy of the Ministry of Culture.

In addition to its museological collection, the Museum constitutes itself as a center of cultural activities, offering educational visit programs, courses in the areas of printmaking, photography and literature, and houses a cinema and a library specialized in the performing arts and photography. The Museum, as a federal body, is supported by the Cultural Association of Friends of the Lasar Segall Museum – ACAMLS, a non-profit civil society, made possible by the collaboration of public and private institutions, in addition to individuals.