When visitors enter the Church of the Madre Deus Convent, they are amazed by the lavish decoration, which makes the convent a fine example of Portuguese Baroque in all its splendour. All available space seems to be decorated by azulejo, gilded carving or paintings.

Although the church was built by King João III and Queen Catherine of Austria in the 1550s, it was lavishly decorated only after the 18th century when large gold and diamond mines were discovered in Brazil. After the initial astonishment, visitors gradually surrender to a sense of serenity and harmony. This pleasant sensation does not occur by chance. It is induced by brilliant planning and by the proportional harmony of this church’s 16th century Mannerist architecture, which resembles that of Roman buildings with rectangular shapes and arches. 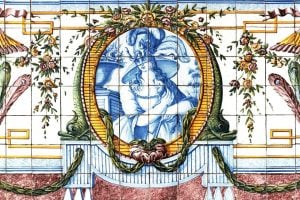 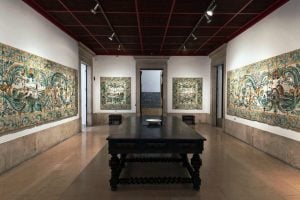 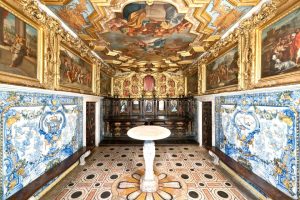 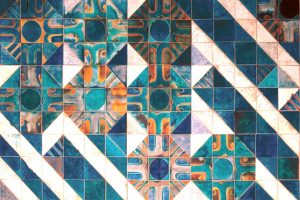 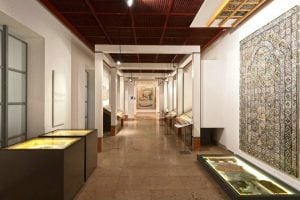 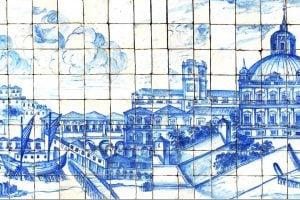 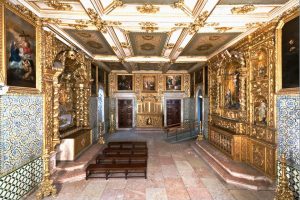 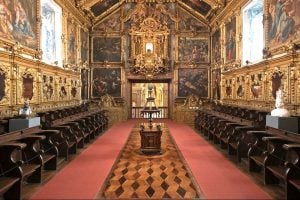 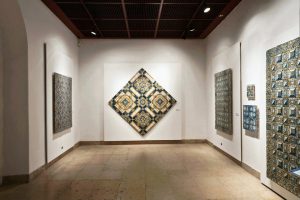 The church is, in fact, a large rectangular space covered by a barrel vault, with a white stone floor and many rows of dark wood benches. This is the nave, and it is connected to the chancel by a large and perfect arch flanked by two smaller arches, which resemble a Roman Triumphal Arch. Moreover, the whole edifice seems to have been designed on a human scale, neither too large nor too small. The church was also designed with worshipers in mind, since its three very tall and narrow windows, on each side of the nave, provide just enough light to create an ideal penumbra for praying.

Today, visitors can climb a flight of 19th century stairs from the Lower Choir to the church. These stairs did not exist when the convent was still a cloister because, in those days, the nuns were not allowed to enter the church. To build this staircase, part of a church wall was removed. The wall originally had a large panel of Dutch tiles depicting Moses on Mount Sinai, believed to be a landscape in Egypt. When the stairs were built, the panel was removed and divided in two parts placed on either side of the stairs. As can be seen, Moses’ flock of sheep was divided into two, and one sheep even has its body on one side and its head on the other.

The church walls are covered half way up with Dutch tile panels in a blue design over a white background, which was ordered in the late 17th century. The tiles on the left depict a landscape of palaces, gardens and rural dances, whereas those on the right depict friars praying in a wild landscape. These scenes were meant to show churchgoers the two optional paths to be followed: a life of pleasure or a religious life. The remaining wall space and the ceiling are completely covered by Portuguese paintings framed in gilded carving -carved wood embellished by a very thin layer of gold. Interestingly, the themes represented in the paintings and their locations were not randomly selected. Immediately above the tiles, the paintings narrate the life of Saint Francis. Higher up, the paintings depict the life of Saint Clare, the founder of the Order of Saint Clare, also known as the Poor Clares. The ceiling, which symbolises the celestial and divine, features a painting depicting the life of Our Lady, the Mother of God, the patron of the convent.

The Madre de Deus Church is open for worship and is selected by many Lisbon residents for their wedding ceremony.

Convent of the Mother of God
The Madre de Deus Convent, formerly owned by the Order of Santa Clara, is located in the eastern part of Lisbon, and now houses the National Tile Museum. Built in 1509 by Queen D. Leonor, wife of King D. João II, only about 1550 is built the present church of Mother of God, by order of King D. João III, and later decorated in the reigns of D. Pedro II, D. João V and D. José, between the late 17th and mid 18th centuries.

In this temple, the carving and the tiles are one of the best examples of Baroque in Portugal.

Today, the Madre de Deus church is an integral part of the National Tile Museum, an important memory keeper of Portuguese culture.

The museum houses in its domains an extensive collection that tells how the tile is made, its history, trends and other important aspects that involve this decorative and symbolic element.

Golden church
At the end of the seventeenth century, King D. Pedro II went back to the Poor Clares of the Madre de Deus Monastery and ordered him to repair almost all over again. To this end, he called João Rebello de Campos, Bishop D. Jerónimo Soares’s Miter Prosecutor and holder of a great genius for outlining plans for buildings, according to Diogo Barbosa de Machado.

This campaign was especially felt at the decorative level, as it dates from this time (c. 1670-1690) the execution of the paintings of the church ceilings, high choir and church body of the workshop of Marcos da Cruz and Bento Coelho da Silveira. The Dutch tile panels were laid in 1686 at the expense of Luís Correia da Paz, a deputy of the Brazilian Trade Junta court who, in return, was granted permission by the nuns to bury himself and his family members in a ram and grave in the convent church. In addition to the paintings and tiles, the church received gilded altars, as well as gilding in the frames of the paintings that decorated the church and the high choir.

In 1707, Friar Augustine of Santa Maria gave his testimony before the seventeenth-century Baroque works: the church has an open sky; not only for the spiritual consolation received by all their souls, but also in the ornaments, aceyo and wealth of it, which is all cooked in gold; and adorned with rich and excellent paintings.

The reign of King John V brought new decorative campaigns to the Monastery. Under the supervision of Father José Pacheco da Cunha a new sacristy was built (1746-1750), where the painter André Gonçalves, the master carver Félix Adauto da Cunha, the carpenter António da Silva, the Master Locksmith Manuel da Rocha and the farmers Luís João and Amaro Gonçalves. In parallel, the carving of the high choir and the church (arch of the cruise) also began to be renewed during these years. To this sexton is also due the decorative campaign of the House of the Ante-choir with paintings depicting the Life of St. Anthony attributed to the workshop of André Gonçalves.

The 1755 earthquake caused some ruin in the building, in particular the church with the collapse of half-choked walls, the destruction of the high altar, the fall of paintings from the church ceiling and the high choir.

King D. José funded the arrangement works that consisted of the execution of a new gallery, restoration and production of new paintings. This campaign again featured painter André Gonçalves and carver Félix Adauto, as well as gilders Vicente Ribeiro, José Joaquim and carpenter Mestre Bernardino. Early artists documented the painting of three new oil panels for the church and the execution of the gilded pulpit, respectively.

All this set produced in the faithful great emotion due to the total decoration of the spaces, characteristic of the Baroque, and the richness of the materials (blue of the tiles, the golden of the carving, the polychrome of the oil paintings) contributing to exemplify the concept of total art.

National Azulejo Museum
The National Tile Museum of Portugal, is an art museum in Lisbon, Portugal dedicated to the azulejo, traditional tilework of Portugal and the former Portuguese Empire, as well as of other Iberophone cultures. Housed in the former Madre de Deus Convent, the museum’s collection is one of the largest of ceramics in the world.

The Museu Nacional do Azulejo is housed in the former Convent of Madre de Deus founded in 1509 by Queen Leonor. Its collection presents the history of glazed tiles in Portugal, from the second half of the XV Century to the present day, proving that the tile remains a living and an identity expression of Portuguese culture.

Occupying various spaces in the building’s former convent wings, MNAz’s permanent exhibition documents the history of tile in Portugal from the 16th century to the present.

In close connection with the presented tile heritage, other ceramic objects belonging to the museum’s collections are integrated into the expository discourse.