The “Market-Garden” Domus formed part of a Roman residential quarter situated on the lower terraces of Cidneo Hill, between the monumental town centre and the eastern city wall. Reception rooms are arranged around stone-paved atria, together with private and service rooms; mosaics and frescos are modelled on similar decorations in Rome and Pompei, and they back onto flower gardens and vegetable patches towards the town wall. The more important rooms had centrally heated floors and walls. A network of lead pipes, fed by one of the city’s aqueducts, supplied running water to services and fountains; the latter were also installed inside reception rooms, an indication of the householders’ elevated social and cultural level.

These Roman town houses were occupied from the 1st to 4th centuries AD, after which they deteriorated and were eventually abandoned. Under the Lombards, the area became part of the royal court estate and later the Santa Giulia monastery fruit and vegetable garden. Since the walls and floors are well preserved and the area is adjacent to the Santa Giulia Museum, it was decided to design an itinerary which would allow visitors to pass directly from the museum’s archaeological exhibition rooms into the domus interiors, under the cover of a protective structure which guaranteed the correct environment for the preservation of the remains, their optimum visibility and an increased perception of their relation to the ancient city. Externally there is a reconstruction of the Roman houses’ vegetable and flower gardens (hortus and viridarium), together with a collection of funerary monuments and architectural fragments.

Monastery garden domus
The monastery was built on the remains of a Roman residential quarter, some of which are included in the museum visitors’ itineraries. The two luxury town houses or domus preserved beneath the monastery’s garden were part of this quarter. Decorated with coloured mosaics and wall paintings, they were inhabited from the 1st until at least the 3rd century AD. The triclinium (dining room) of the Domus of Dionysus is the room with most wall paintings; at the centre is an exceptional mosaic depicting Dionysus. Detail of the figured panel in the middle of the triclinium showing the god Dionysus giving a drink to a panther.

Exposition of sarcophagus slab sand mosaics in the museum. Mosaics were the most widespread floors in the Roman world. Black and white mosaics with geometric patterns are most common. Epitaphs contain important informations about professions, the society, the customs, the habits and the human dramas of the common people. 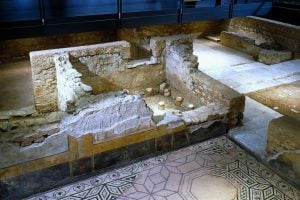 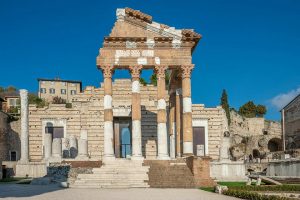 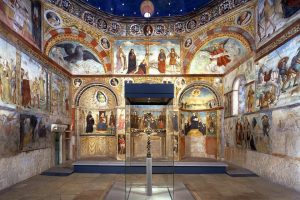 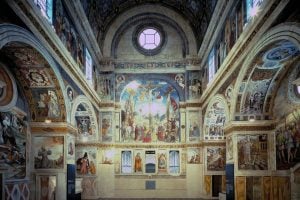 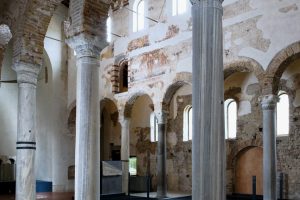 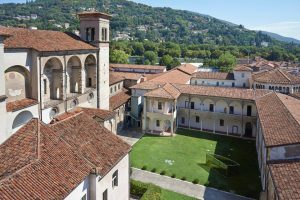 The Viridarium
From the museum area of the Domus of Ortaglia, by glancing outwards, it is possible to grasp the Viridarium in all its particularity, a sort of garden of the houses of ancient Brixia. Starting from the archaeological excavations, which brought to light quadrangular spaces delimited by walls, probably the horti of Roman houses, it was possible to reconstruct the green areas adjacent to the domus, as they must have been two thousand years ago.

If in fact in the most ancient times the hortithey were mainly productive lands, where fruit trees and aromatic herbs were cultivated, since the first century BC the taste of the pleasant garden, the viridarium, with flowers and tree species for decorative and contemplative purposes has been affirmed.

In conjunction with the museum layout of the domus, archaeologists, botanists and architects have ventured to recreate in Santa Giulia, on an area of over 3,000 square meters, a vegetable garden orchard and a viridarium with tree species widespread and used in Roman times for ornamental, culinary or therapeutic purposes. Along paths paved with stone slabs, following a simple and orderly geometry, fruit trees were planted in the hortus including the vine (protagonist of the mosaics of the domus of Dionysus), the fig, the apple tree and the quince, the however, the medlar, together with plum, peach and pomegranate, inevitable ingredients in recipes from the Latin era, as well as emblematic symbols of Mediterranean civilization.

In the Viridarium, on the other hand, to recreate the atmosphere in which the inhabitants of ancient Brixia immersed themselves, geometric hedges of boxwood and laurel, a plant consecrated to Apollo, along with oleander, viburnum and myrtle bushes catch the eye. The rose in its most ancient varieties, as a prominent element in every Roman garden, represents the most significant chromatic stain, in the different species including the canine, the gallica and the musk, which they wrap with perfumes and colors, today as at the time of the divo Augusto.

Continuing towards the Roman walls, finds were placed which were the result of excavation works in the various city areas, such as inscriptions, votive altars, friezes, funerary monuments including large sarcophagi, surrounded by elms, cypresses and acanthus rows.

Santa Giulia museum
The Museum of Santa Giulia is the main museum in Brescia, located in via dei Musei 81 / b, along the ancient decumanus of the Roman Brixia. It is housed inside the monastery of Santa Giulia, built by King Desiderio in the Lombard era and variously enlarged and modified in more than a thousand years of history. The City Museum, unique in its design and location – a monastic complex of Lombard foundation – and with display areas covering 14,000 m², offers a journey through Brescia’s history, art and spirituality from prehistoric times to the present day.

The Benedictine convent of San Salvatore – Santa Giulia was founded in 753 by the last Lombard king, Desiderius, and his wife Ansa and occupied a role of great religious, political and economic importance, which continued after the Lombards’ defeat by Charlemagne. According to tradition, the dramatic story of Ermengarda, daughter of Desiderius and rejected bride of the Frankish emperor, was played out here; it was recounted by Manzoni in Adelchi.

The area below the Museum is rich in archaeological finds from various eras, mostly belonging to the Roman era and well preserved, in particular the Domus of Ortaglia. The museum includes all the structures of the ancient monastery, including the church of Santa Maria in Solario, the choir of the nuns and the church of Santa Giulia. The site is composed of parts from many different epochs: a stratification of memories and a continual source of unexpected discoveries. The complex was built on the ruins of impressive Roman town houses and includes the Lombard church of San Salvatore and its crypt, the Romanesque Santa Maria in Solario, the Nuns’ Choir, the sixteenth-century church of Santa Giulia and the monastery cloisters. It is the perfect location for the City Museum and the natural focal point for a visit to Brescia.

The Museum’s special distinguishing feature is the close relationship between the historic buildings and the objects on display, which number about 11,000 and include Celtic helmets and horse harness ornaments, Roman portraits and bronze sculptures, Lombard items, grave goods, frescos, an applied art collection and artefacts dating from the medieval period to the 18th century AD. The Winged Victory, the city’s symbol, is a large bronze statue from the Capitolium. Recent studies have shed new light on the sculpture’s history and the life of ancient Brixia.

Thousands of objects and works of art from the Bronze Age to the nineteenth century are preserved in the museum, mainly from the city context and the province of Brescia, which make it a real city museum, whose in-depth themes mainly concern the history of the city of Brescia and its territory. The numerous works of art include the Winged Victory, the Desiderio Cross, the Lipsanoteca and the “Collectibles and Applied Arts” sector, where all the private collections donated to the museum between the eighteenth and nineteenth centuries are kept.