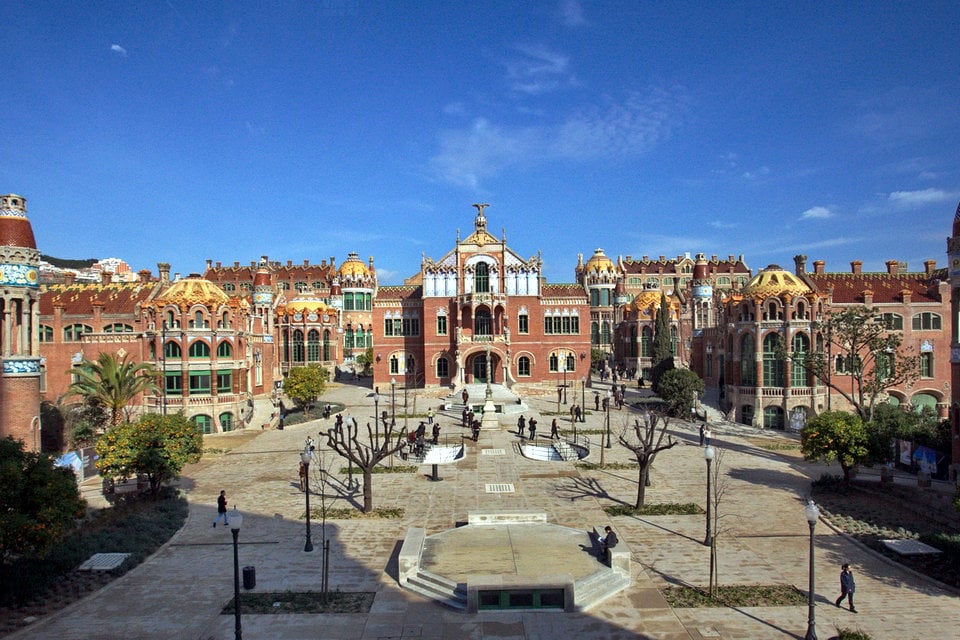 Courtyard of Modernist Pavilions, Hospital of the Holy Cross and Saint Paul

The selected plot fulfilled important health aspects which are no longer taken into account, such as the “location at the foot of the mountain in a remote area of ​​the city with sea views”, although others would still be valid today. in day time, as having a large proportion of landscaped interior space where patients and visitors could wander and be outdoors, feeling more in a sanatorium than in a closed hospital. This is possible thanks to Domènech’s conception of a hospital complex with its own urban layout oriented on a north-south axis, enjoying maximum solar radiation.towards the main facades. The architect’s innovative vision gives the ensemble its own personality, which shies away from the concept of “hospital-palace” and approaches “garden city”, a small city embedded in the city, a functional, aesthetic whole. , human and modern.

Among all the buildings, the main one stands out, from the administration, which is accessed by a wide staircase. On both sides are the library and secretarial rooms. In a separate space is the church, which is impressive. However, the pavilions are also of great interest, especially since each one is different from the others.

The architect Domènech had several artists who collaborated with him on the project. The main ones were Pablo Gargallo and Eusebio Arnau , who made the numerous sculptures in the complex, Francesc Labarta , who designed the paintings and mosaics, and Josep Perpinyà , who took charge of the wrought iron elements.

With the passage of time, the need for expansion has once again become evident, both in terms of the number of patients, as well as the technological advances in medicine and the growing teaching activity, since the hospital is now university in nature. During the second half of the last century, some new buildings were incorporated into the complex, of which the most important is the Urology Institute (Fundació Puigvert), a private hospital dedicated entirely to this specialty.

The hospital was conceived to have all the services within it and thus isolate it from the city. In the design streets, gardens, buildings with water supply, a church and even a convent were projected.

The main entrance is oriented forty-five degrees from the Ensanche looking towards the Sagrada Familia. It is believed that the reason for this orientation is that Domènech i Montaner wanted to take advantage of the wind coming from the sea to ventilate the hospital and safeguard it from diseases. Montaner is also believed to orient the entrance in this way to break with the grid structure of the Ensanche district, which he did not like.

The access pavilion is made of exposed brick like most of the complex. Domènech i Montaner uses various architectural styles in a masterful and very orderly way as we can see in this main pavilion where we find Gothic, Neo-Gothic, Byzantine elements and Germanic architectural styles such as the clock tower. There are two figures indicating the start and end dates of this main building (1905 the start date represented by the Greek letter alpha and the end date, 1910, represented by the letter omega). they find four sculptures of a young Pablo Gargallo that represent the three theological virtues (faith, hope and charity) plus a fourth, the work, since Domènech i Montaner thought that man should demonstrate these three virtues through his actions or works.

Inside the main pavilion is a structure of arches and columns that represents a garden of medicinal plants, since in the past this type of plant was cultivated in hospitals to create their own medicines. The San Pablo hospital was also thought to have a medicinal garden behind the main entrance although it was not finally built.

Another important feature is that the hospital was designed to differentiate patients between men and women. On the right side are the men’s pavilions that have the names of saints, and on the left side the women’s pavilions with the names of saints or virgins. In fact at the main entrance there was a door in the right wing for men and a door in the left wing for women.

A further curiosity that reflects the architect’s concern for harmony and symmetry is that the wards that are near the main entrance are the smallest and grow in function as we enter the hospital, forming a perspective that is pleasing to the eye. . Also say that the pavilions that are at the same height are the same, and the only difference is that one is dedicated to a saint and the other to a saint or virgin depending on whether it was a pavilion for men or women (right side for men and left side for women).

Administration building
1902-1911
Main building and official façade of the hospital
Set of three bodies, a central one with a neogothic structure, with an imposing clock tower and with an important iconographic decoration. The side bodies are more conventional in design, though they contain quite a few Modernist decorative elements.

Operations building
1902-1911
Located in the center of the main street
It is a three-story, semi-basement building. His patron saints are Saint Cosme and Saint Damian , trustees of the doctors and apothecaries. The iconographic program is not limited to these figures, but it contains a large sculptural and ceramic sample.

San Salvador and San Leopold
1902-1911
First and second pavilions, east side after accessing the enclosure
Leopold’s name was in honor of Leopold Gil and Leopold, nephew of the patron, and who acted as a model for sculpture.

The Most Pure; Virgin of Carmen; Virgin of Mercy; Virgin of Montserrat
1902-1911
The first four pavilions on the west side after access
They are twin pavilions, with the exception of the transformations and extensions that have been subsequently suffered

St. George and St. Apollonia
1902-1911
On both sides of the administration building
They are two small isolated pavilions that were used to recognize doubtful cases of being infectious.

San Rafael
1914-1918
Third pavilion on the east side after access to the enclosure
It was the first built with a different patronage from Pau Gil. It was funded by Rafael Rabell and his daughter Concepción. In its decoration, the interior mosaics and the outer stone tracery, the initials “R” referring to the patron rather than the ubiquitous “G” appear in the previous pavilions.

Hospital of the Holy Cross and Saint Paul
The Hospital de Sant Pau is located in a complex of buildings located in Barcelona, designed by the architect Lluis Domenech i Montaner , one of the main representatives of Catalan modernism. It was built between 1902 and 1930 in two phases: the first by Domènech himself, between 1902 and 1913, it consists of thirteen modernist buildings; the second, made by his son Pere Domènech i Roura from 1920It consists of six other buildings of moderate modernism and other later buildings. With its main building and its numerous pavilions, the Hospital de San Pablo is, together with the Pere Mata de Reus Institute (also by the same architect), one of the largest ensembles of Catalan modernist architecture.

The Sant Pau Art Nouveau Site, formerly the Hospital de la Santa Creu i Sant Pau, is one of the most prominent buildings of modernist architecture in Barcelona . Its author, the architect Lluís Domènech i Montaner, was responsible for building another of the main modernist buildings in Barcelona , the Palau de la Música. Both were declared World Heritage by UNESCO in 1997, valuing their uniqueness and beauty.

The Modernist Site is the largest architectural ensemble of this style in Europe and is one of the main examples of Catalan modernism . Domènech devised a “city within the city” with pavilions surrounded by gardens and connected by a network of underground tunnels.