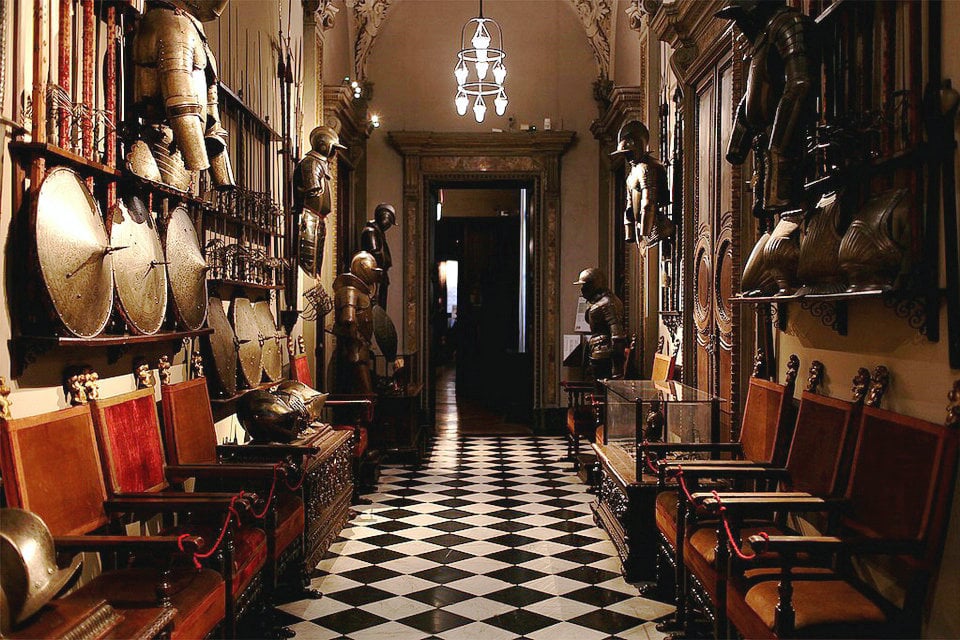 Sala degli Armigeri
A solemn staircase leads from the Studio to the ground floor, to the entrance on Via Santo Spirito. In the current tour, this environment no longer serves as an entrance, but at the time when the house was inhabited this second monumental entrance allowed the apartments of the two brothers to be fully autonomous. Among the elegant fixed furnishings of the room, the nineteenth-century red marble washbasin stands out with a Renaissance fragment inside.

Studio
At the time of Fausto and Giuseppe Bagatti Valsecchi, this room was the first reception area on the noble floor for those arriving from the entrance of Via Santo Spirito. With its antique paintings, carved furnishings, elegant door frames and two-tone marble flooring, it added to the richness of the Bagatti Valsecchi home. The room was also used as a study, in which the landlords used to retreat to read, receive visits or to treat the purchase of works for their home. A French window leads into the large loggia that is not currently included in the usual visit route, which faces on one side of one of the inner courtyards of the Palace, on the other side on Via Santo Spirito.

Lunchroom
The cladding of this room is made up of four large panels drawn from a pair of tapestries produced in Brussels around 1570, depicting episodes from the life of the Persian king Cyrus. To the left of the large fireplace, a door now closed led to the office, where, through a dumbwaiter, meals arrived in the underlying kitchen on the ground floor. On the central table and in the four showcase furniture, antique glass artefacts and Renaissance ceramics are set up.

Gallery of Arms
In this long symmetrical environment at the Galleria della Cupola the two brothers exhibited the weapons and armor of their collection, one of the hallmarks of Lombard collecting. As in the rest of the dwelling, ancient specimens are placed side by side in style or integrated artifacts, so as to give the impression of being in an ancient armory. In addition to defensive tools such as shields and armor, the collection is composed almost exclusively of white weapons, that is, weapons complete with llamas; in the eyes of the two brothers they appeared, compared to the firearms, more functional to the evocation of the Renaissance that they were pursuing.

Lounge area
The great Hall is the largest room of the Bagatti Valsecchi house: to make this room more majestic, a real place of representation, the two brothers conceived a double-height room and adorned the ceiling with wooden coffers adorned with golden pine cones. An articulated lighting system makes the room shine in all its sumptuousness: eight large torch stands alongside the large central chandelier and four pedestal lamps in the corners of the room. Initially powered by gas, these chandeliers were all prematurely converted to electricity. Casa Bagatti Valsecchi was in fact one of the first private residences in Milan to be equipped with electricity, reaffirming Fausto and Giuseppe’s interest in technological innovations and the most futuristic inventions of his time.

Entrance staircase
The ticket office of the Museum is accessed, through a staircase with a beautiful wrought iron railing, on the noble floor of the Palace. From the gallery you enter the first room of Fausto’s apartment: although the reception rooms were common, both brothers had some personal rooms, which created two private areas within their home.