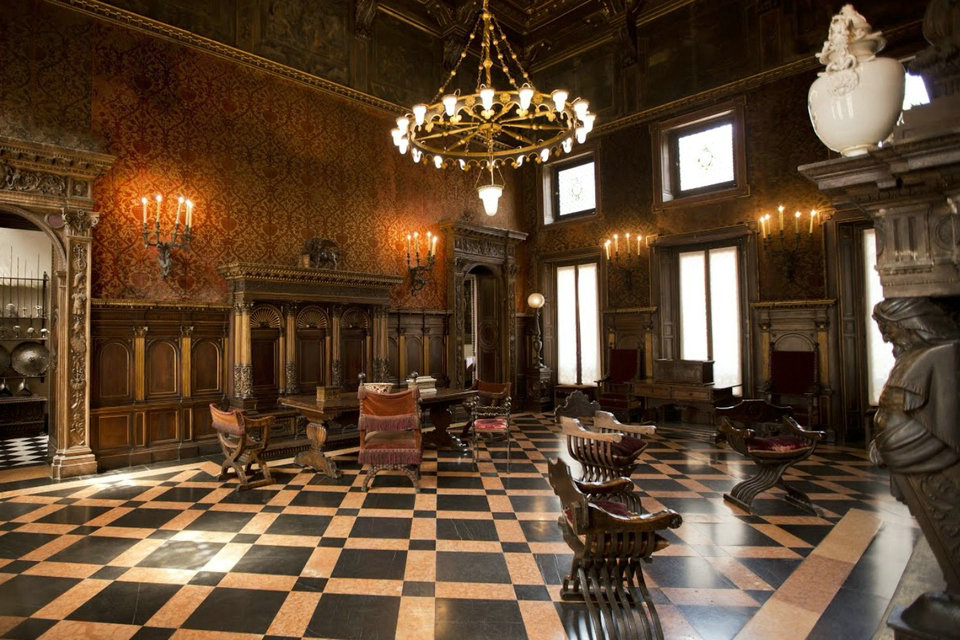 Sala dell’Affresco
A vestibule starts at the Sala dell’Affresco, which owes its name to the work dated 1495 by the Bergamo painter Antonio Boselli depicting the Madonna della Misericordia, coming from the parish church of Ponteranica (province of Bergamo). This first room of Fausto’s apartment exemplifies the articulated and elegant re-enactment of the Renaissance that characterizes the Bagatti Valsecchi house. On special occasions, the environment was used by the family as a private chapel in which to celebrate weddings or baptisms.

Sala Bevilacqua
The Sala Bevilacqua was the elegant private parlor of Fausto Bagatti Valsecchi. Together with the great Salone, it is the only room in the house that still preserves the precious original upholstery created at the end of the nineteenth century. Among the works exhibited, the precious polymaterial table of the Madonna and Child stands out, a work of the late fifteenth century by the Milanese painter Ambrogio Bevilacqua.

Library
The Library, designed to offer an environment suitable for study and concentration, is collected within the compact front of the wooden cabinets that adorn the walls. His pictorial decoration, created in 1887 by Luigi Cavenaghi, is inspired by the sixteenth-century frescoes by Bergognone in the chapter house of Santa Maria della Passione in Milan. A precious pair of globes dated to 1579 – one terrestrial, the other heavenly – is set up on nineteenth-century pedestals while the long central table houses antique ivory artifacts, caskets and scientific instruments.

Camera del Letto Valtellinese
Fausto’s Bedroom contains some of the most important works from the Bagatti Valsecchi collection: among these, the sixteenth-century polyptych of the Virgin and Child with Saints by Giampietrino and the bed adorned with virtuoso wood reliefs from Palazzo Visconti Venosta in Grosio, Valtellina. The care and originality of the details contribute to the refinement of the environment: the marble floor simulates a carpet surrounded by fringes, while in the lacunars of the Neo-Renaissance ceiling the letters of the name Faustus alternate with the Bagatti Valsecchi crests.

Vestibule
A small vestibule adorned with a pair of 16th century stained glass windows (the Lombard Transito di Santa Marta and the Crucifixion of the Germanic area) leads into the Bathroom.

Bathroom
A small vestibule leads to the Bathroom. This apparently bare environment is the best interpreter of the Bagatti Valsecchi philosophy: love for the past and the art of the Renaissance married in search of modern comforts. In spite of ancient appearances, the bronze washbasin and the marble basin are in fact sanitary fixtures with running water, particularly avant-garde equipment for the late nineteenth century.