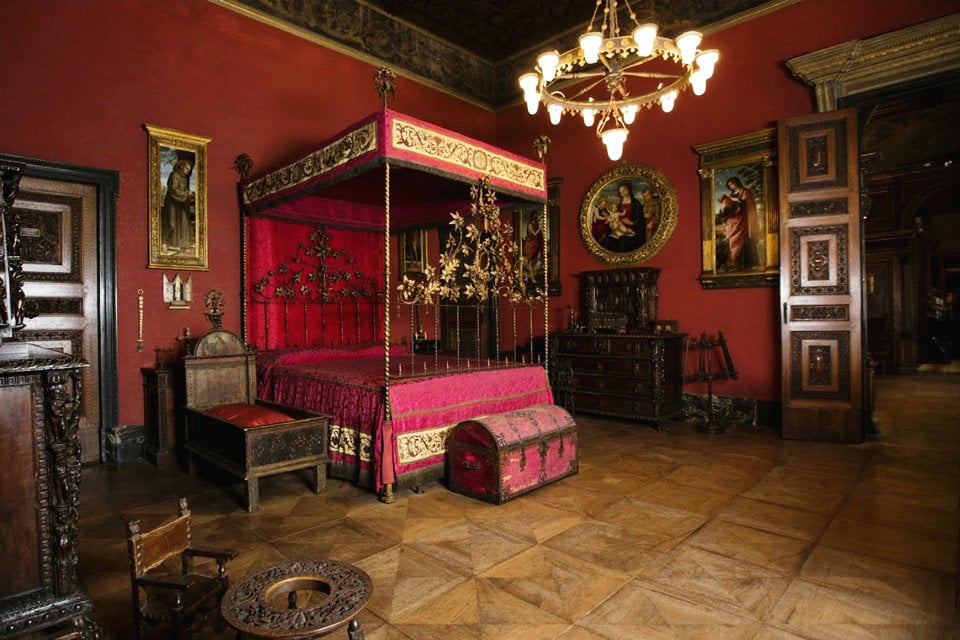 Exhibition Hall
In June 2015 the Museum inaugurated a new room: thanks to the design contribution of the Lissoni Associati studio, the meeting room was transformed into a multi-purpose space. From the wardrobe of the spouses Carolina and Giuseppe to the management’s office, the room has changed its use several times finding now a setting that allows it to host exhibitions, meetings, events.

Until March 10th 2019, the room hosts a digital installation of the signature. Stories and characters from the Bagatti Valsecchi guestbook

Green Room
This room, adjacent to the master bedroom, was the bedroom of Giuseppe Bagatti Valsecchi, who, according to the use of the aristocratic families of the time, also had his own private room. On the tables are set up, among others, some liturgical objects such as monstrances and sixteenth and sixteenth-century relics, which combine to reinforce the refined and precious atmosphere of this bedroom.

Red Room
In the double bedroom of Carolina Borromeo and Giuseppe Bagatti Valsecchi stands the large Sicilian wrought iron bed decorated with gold leaf. The sumptuous ensemble of the room offers the backdrop to the beautiful collection of fourteenth and sixteenth-century tables arranged along the walls: among these, the Santa Giustina by Giovanni Bellini stands out, dating back to around 1470. Among the furnishings of this environment we note a group of antique furniture for children, as if to hint at the five children born of the marriage of Giuseppe and Carolina.

Sala della Stufa Valtellinese
The room represents the first room of the apartment of Giuseppe Bagatti Valsecchi and his wife Carolina Borromeo; it served as a drawing room and owes its name to the wooden cladding applied along the walls belonging to a room in the stove of an ancient house in Sondrio. Above the fireplace, an inscription in Latin freely inspired by a sentence of St. Augustine warns those who thought they could take advantage of a halt before the fire to make gossip: Those who love to speak ill of the absent, know that this hearth is precluded to them.

Bagatti Valsecchi Cabinet
This small room accessible from the Galleria della Cupola is not part of the historic apartments of the Bagatti Valsecchi house, but is a modern arrangement. The room is furnished like a wardrobe, where you can browse through photographs and open drawers containing memorabilia and simple everyday objects to
get acquainted with Fausto and Giuseppe Bagatti Valsecchi and with the descendants who continued to inhabit the rooms until 1974.

Dome Gallery
The Galleria della Cupola owes its name to the dome with a skylight above it. Like the parallel Galleria delle Armi, this environment flanks the great Hall and acts as a link between the two bodies of the Palace, linking Fausto’s apartment with that of his younger brother Giuseppe. On the long tables leaning against the walls are set some of the most important ceramics of the Bagatti Valsecchi collection, among which stands a large vase signed by Ippolito Rombaldoni and dated to 1678.

Passage of the Labyrinth
This environment owes its name to the decoration of the ceiling, inspired by the sixteenth century Stanza del Labirinto in the Ducal Palace of Mantua. On the octagonal table there is a collection of small tools and antique objects, including keys, padlocks and cutlery. The attention of the Bagatti Valsecchi brothers towards applied art objects arose from the conviction that these everyday objects were particularly suitable for their collectibles of domestic character and that they could offer valid reasons for inspiration to modern nineteenth-century artisans.