The living room preserves a number of important works of art from North Africa and Spain, the latter of which was known as al-Andalus in Arabic and ruled by independent Islamic dynasties for over seven centuries (756-1492) from southern cities such as Cordoba and Granada. The room is dominated by large-scale architectural features custom-made in Morocco in 1937, including a painted and coffered ceiling; a stylized stucco pseudo-inscription frieze running below; and, on the room’s east end, a stucco spandrel flanked by tall painted wood doors (see thumbnails below). The doors surround a large arch that leads into the Mihrab Room and frames the collection’s masterpiece, the Veramin luster mihrab (48.327) dated 663 of the Hijra (1265 of the Common Era). In Moroccan buildings, similar configurations (arch–spandrel–soaring doors) characterize the entrances of rooms located off central courtyards.

The north and south (oceanside) walls of the living room display Doris Duke’s (1912–93) collection of Spanish luster ceramics and tilework, virtually all of which was acquired at the sales of William Randolph Hearst’s private collection in 1941. The dado (lower portion) of the north wall is decorated with over 200 molded luster tiles (48.168) dating to c. 1525–50, of the type that adorn ceilings in churches in Sevilla and Carmona (see similar tiles in the V&A collection). On the wall above the dado, as well as on the south wall, are Spanish luster dishes and basins made in Manises, a suburb of Valencia on the eastern coast. Most date to the fifteenth and sixteenth centuries—just before, during, and after the Islamic kingdom of Granada (Nasrid dynasty: 1232–1492) was conquered by the Catholic monarchs Ferdinand II of Aragon and Isabella I of Castile in 1492. Many of these vessels bear the coats of arms of Christian—particularly Italian—families, exemplifying Spain’s rich history of cross-cultural exchange. They further demonstrate the taste for luster throughout the Islamic world and provide a western complement to the eastern Islamic tilework preserved in the adjacent Mihrab Room. 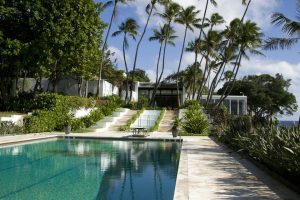 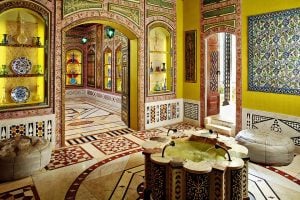 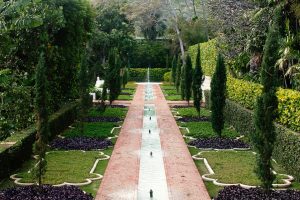 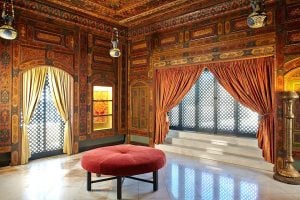 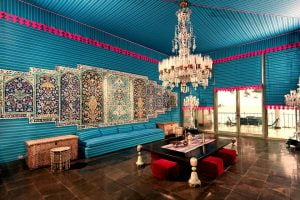 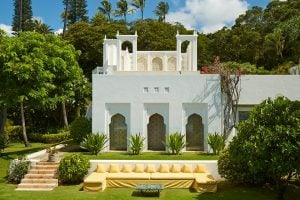 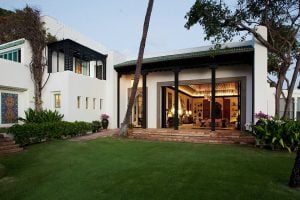 In addition to these exemplary works of western Islamic art, the living room features modernist design and technical innovations. The room’s upholsteries and curtains (87.18.1–6) are the work of the mid-century American textile artist Dorothy Liebes (d. 1972). On the Diamond Head–side of the room is a glass wall that descends completely into the floor, granting visitors an unobstructed view of the main axis of the house stretching from the Mihrab Room on the east to the Playhouse on the west. The pierced wood screens and glass doors on the south (oceanside) wall can be pulled aside to provide yet another direct view of the ocean beyond. The living room—like the central courtyard —is therefore also characterized by the fluid interplay of interior and exterior spaces.

Shangri La Museum of Islamic Art, Culture & Design
Shangri La is a museum for Islamic arts and cultures, offering guided tours, residencies for scholars and artists, and programs with the purpose of improving understanding of the Islamic world. Built in 1937 as the Honolulu home of American heiress and philanthropist Doris Duke (1912-1993), Shangri La was inspired by Duke’s extensive travels throughout North Africa, the Middle East, and South Asia and reflects architectural traditions from India, Iran, Morocco and Syria.

Islamic Art
The phrase “Islamic art” generally refers to arts that are products of the Muslim world, diverse cultures that historically extended from Spain to Southeast Asia. Beginning with the life of the Prophet Muhammad (d. 632) and continuing to the present day, Islamic art has both a wide historical range and broad geographical spread, including North Africa, the Middle East, Central Asia and part of South and Southeast Asia as well as eastern and sub-Saharan Africa.

Visual Elements of Islamic Art. Islamic art covers a wide range of artistic production, from ceramic pots and silk carpets to oil paintings and tiled mosques. Given the tremendous diversity of Islamic art – across many centuries, cultures, dynasties and vast geography – what artistic elements are shared? Often, calligraphy (beautiful writing), geometry, and floral/vegetal design are seen as unifying visual components of Islamic art.

Calligraphy. The preeminence of writing in Islamic culture stems from the oral transmission of the word of God (Allah) to the Prophet Muhammad in the early seventh century. This divine revelation was subsequently codified into a holy book written in Arabic, the Qur’an (recitation in Arabic). Beautiful writing became imperative for transcribing the word of God and for creating sacred Qur’ans. Calligraphy soon appeared in other forms of artistic production, including illuminated manuscripts, architecture, portable objects and textiles. Although the Arabic script is the crux of Islamic calligraphy, it was (and is) used to write a number of languages in addition to Arabic, including Persian, Urdu, Malay and Ottoman Turkish.

The content of the writing found on Islamic art varies according to context and function; it can include verses from the Qur’an (always Arabic) or from well-known poems (often Persian), the date of production, the signature of the artist, the names or marks of owners, the institution to which an object was presented as a charitable gift (waqf), praises to the ruler, and praises to the object itself. Calligraphy is also written in different scripts, somewhat analogous to type fonts or today’s computer fonts, and the most renowned artists in the Islamic tradition were those who invented, and excelled in, various scripts.

Geometry and Floral Design. In many examples of Islamic art, calligraphy is superimposed upon backgrounds covered in geometric patterns, floral motifs, and/or vegetal designs with curved leaf forms known as “arabesques.” The appearance of this surface decoration differs according to where and when an object was made; the forms of flowers in seventeenth-century Mughal India, Ottoman Turkey and Safavid Iran are quite different, for example. In addition, certain designs were favored in some places more than others; in North Africa and Egypt, bold geometry is often preferred over delicate floral patterns.

The Figure. Perhaps the least understood visual component of Islamic art is the figural image. Although the Qur’an prohibits the worship of images (idolatry)—a proscription stemming from the rise of Islam within a polytheistic tribal society in Mecca—it does not explicitly preclude the depiction of living beings. However, figural imagery is generally confined to secular architectural contexts—such as the palace or private home (rather than the mosque)—and the Qur’an is never illustrated.

Some of the earliest palaces in Islamic history include life-size frescoes of animals and human beings, and by the tenth century, figures were standard iconography on ceramic vessels, including the earliest luster examples made in Iraq (see example) and later those made in Kashan, Iran. During the medieval period, human figures in miniature scale became integral to the illustration of religious, historical, medical and poetic texts.

Note on Dates. The Islamic calendar begins in 622 CE, the year of the emigration (hijra) of the Prophet Muhammad and his followers from Mecca to Medina. Dates are presented as follows: 663 of the Hijra (AH), 1265 of the Common Era (CE), or simply 663/1265.

Diversity and Variety. First-time viewers of Islamic art are often captivated by its technical sophistication and beauty. Blown glass, illuminated manuscripts, inlaid metalwork, and soaring tiled domes astound through their color, forms, and details. Not all examples of Islamic art are equally luxurious, however, and a number of circumstances contribute to the diversity and variety encompassed under the broad term “Islamic art.”

The wealth of the patron is a critical factor, and functional objects for everyday use—basins for washing, chests for storing, candlesticks for lighting, carpets for covering—can differ significantly depending on whether they were made for a king, a merchant, or a peasant. The quality of a work of art is equally tied to its maker, and while the majority of Islamic art is anonymous, a number of master artists signed their works, desiring to be credited for their achievements, and indeed remain well known. Finally, the availability of raw materials also determines the look of an Islamic work of art. Due to the vast topography of the Islamic world (deserts, mountains, tropics), strong regional characteristics can be identified. Brick buildings clad with ceramic tiles are common to Iran and Central Asia, whereas sandstone and marble architecture is ubiquitous in India.

The regional—and by extension, linguistic—origins of a work of art also determines its appearance. Scholars and museums often deconstruct the broad term “Islamic art” into sub-fields such as the Arab lands, Persian world, the Indian subcontinent and other regions or by dynasty. The presentation of Islamic art in museums is often further segmented into dynastic production (example), which results in an emphasis on courtly production and patronage of the highest quality (example).

Status of the Field. The field of Islamic art history is currently experiencing a period of self-reflection and revision. Publicly, this is most evident in a number of major museum reinstallations (Metropolitan Museum of Art, Louvre, Brooklyn Museum, David Collection) that have transpired over the last decade and some of which are still in progress. Of central concern is the validity of the phrase “Islamic Art” to describe the visual culture in question. Some curators and scholars have rejected this religious designation in favor of regional specificity (consider the new name of the galleries at the Metropolitan Museum of Art) and have criticized its monolithic, Eurocentric, and religion-based origins. Indeed, although some examples of Islamic art and architecture were made for religious purposes (a Qur’an for recitation in a mosque), others served secular needs (a window to decorate a home). Moreover, there are many examples of non-Muslims creating works of art categorized as “Islamic,” or even “Islamic” works of art created for non-Muslim patrons. These realities acknowledged, some scholars and institutions have opted to stress the Islam component of “Islamic art” (consider the name of the Louvre’s renovated galleries, “Arts of Islam,” that reopened in the fall of 2012).

The collection of the Doris Duke Foundation for Islamic Art (DDFIA), and its presentation at Shangri La, has much to contribute to these ongoing global dialogues. At a moment when the designation “Islamic art” is being fiercely debated, the DDFIA collection challenges existing taxonomies (ethnographic artifact versus fine art; secular versus religious; central versus periphery), while stimulating new ways of thinking about, defining and appreciating the visual culture.