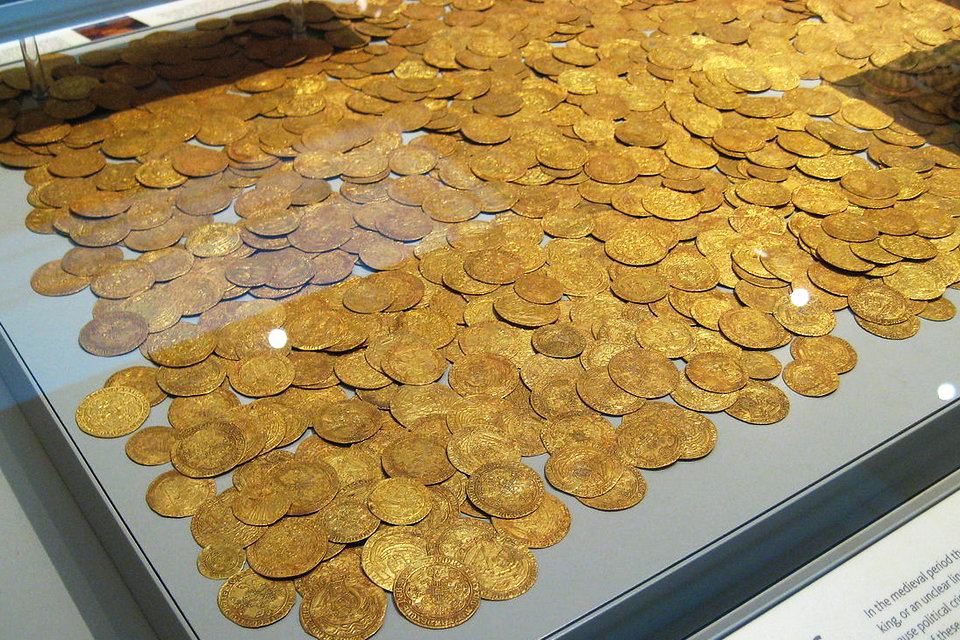 Stories of money, The British Museum

The Department of Coins and Medals is home to one of the world’s finest numismatic collections, comprising about one million objects. The collection spans the history of coinage from its origins in the seventh century BC to the present day, and related material such as coin weights, tokens and money boxes.

The department also holds the national collection of paper money, ranging from one of the earliest fourteenth century Chinese banknotes to the euro, as well as a magnificent selection of commemorative and art medals from the Italian Renaissance to the present.

The most extensive numismatic library in the country is also housed within the department and, like the collection itself, exists for the benefit of the scholar and general public alike. This material is brought to a wide audience through exhibitions, publications, a broad programme of educational events and through our study room facilities.

Temporary exhibitions are mounted by the department on a range of themes, featuring different parts of the collection. The department’s most recent gallery, the Citi Money Gallery, chronicles the development and use of money throughout the world.

Money (Room 68)
From prehistory to the present day

The history of money can be traced back over 4,000 years. During this time, currency has taken many different forms, from coins to banknotes, shells to mobile phones.

A gold (and silver) standard
Cities and empires traded without using coins for over 2,000 years. But when ancient Mediterranean kingdoms like Lydia (in modern Turkey) began issuing pieces of electrum (a mixture of gold and silver) like this one, of a consistent weight and purity, the idea quickly caught on. This is one of the earliest coins in the world, and today the change in our pockets is based on the same inspirational idea that brought it into being.

Money talks
As well as having purchasing power, coins also have the power to send messages through the images or writing on them. Roman emperors, such as Nero, often used money as a way of presenting a particular image of themselves on coins that circulated throughout the empire’s many provinces.

Sea change
For thousands of years, cowrie shells were used as currency around the world, from China to Arabia and Africa. Their widespread use shows that people entrusted such objects a worth independent of their intrinsic value, enabling their daily trade.

Ways and means
As well as being used as money, coins can symbolise spiritual well-being, fertility, or other sorts of wealth. In Buddhist cultures, offerings of money were thought to bring spiritual benefit to the donor. This vase and 66 bronze coins were part of a group of offerings dedicated to the Buddha by a man called Vagramarega, for the benefit of himself and his family.

Seeing is believing
Islam became the dominant religion of the Middle East and North Africa from around the AD 650s. The Umayyad Caliph ‘Abd al-Malik of the Islamic Empire is shown on his early coins as a powerful ruler. In AD 696–7, his coinage was reformed. His image was removed, replaced by Qur’anic inscriptions in Arabic. This became standard across the Islamic World for hundreds of years.

Something of note
The 14th century banknote has the grand name ‘Great Ming Circulating Treasure Certificate’. It was the Chinese who first printed a value on a piece of paper and persuaded everyone that it was worth what it said it was. The whole modern banking system of paper and credit is built on this one simple act of faith.

Just giving
In medieval and Renaissance Europe, Christians supported the clergy, maintained churches and assisted the poor through the payment of tithes. They also made a wide range of voluntary donations and charitable provisions. This box is a rare survivor of a type that must once have been common at the entrance to a chapel or near an altar or devotional image.

Trading places
For centuries, people in West Africa traded the gold found there along the historic caravan routes across the Sahara. People in the Asante kingdom used gold dust measured with special weights and scales to make payments and pay taxes. By the 1400s, Portuguese traders reached the West African coast by sea, establishing trade links between Europe and West Africa.

Taking stock
A rapid increase in the amount of money in circulation, or a ‘bubble’, when prices increase dramatically, can lead to financial crisis. This medal marks the stoppage in 1720 of a French bank founded by Scottish economist John Law. Law overstated the assets of his Mississippi Company, causing a rush to buy shares. When shareholders demanded cash payment a run on the bank and financial chaos followed.

Change is good
In the early 1900s this British penny was defaced to promote the suffragette cause. This bold criminal act was one of many that catapulted the movement for women’s right to vote into the political limelight. The penny stands for all those who fought for this monumental change.

Shell out for currency
Currencies made from stone, feather, or shells, like this Kina shell from Papua New Guinea have performed an important social and cultural function, alongside their economic one in many parts of the world. Today, this heritage is a source of pride for some countries, and traditional currencies often feature in the design of their national coins and banknotes.

Ring the changes
With infrastructure virtually destroyed in the devastating earthquake in 2010, the people of Haiti rapidly embraced mobile phone payments. When it comes to turning the phone into a wallet, the UK and much of Europe fall well behind countries like Haiti where wireless and mobile technologies are changing people’s lives.

History
Numismatics constituted an important part of the 1753 bequest of Sir Hans Sloane which formed the British Museum’s original collection, comprising some 20,000 objects. The collection was incorporated into the Department of Antiquities in 1807, before the establishment of a separate Coins and Medals department in 1860-1.

As in other parts of the museum, the department has been able to expand its collection by purchase, donation and bequest. The department has benefited from the munificence of collectors such as Clayton Mordaunt Cracherode, Sarah Banks, Edward Hawkins, Sir Alexander Cunningham and George Bleazby. A significant strength of the collection are British coins from all ages, which have benefited from the ancient law of Treasure Trove. This has enabled the museum to purchase important hoards of gold and silver coins, many of which were buried during periods of crisis or upheaval. There are approximately 9,000 coins, medals and banknotes on display around the British Museum. More than half of these can be found in the Citi Money Gallery (Gallery 68), while the remainder form part of the permanent displays throughout the museum. Items from the full collection can be seen by the general public in the Study Room by appointment.

The department celebrated its 150th anniversary in 2011.

Research, publications and exhibitions
The Department has a strong research history, which underpins publications (see, for example, the British Museum Catalogues of Coins, exhibitions and other activities.

1881 A Guide to the English Medals Exhibited in the King’s Library, by Herbert A. Grueber
1881 A Guide to the Italian Medals Exhibited in the King’s Library, by C.E. Keary
1883 The British Museum [Martin] Luther Exhibition, 1883, in the Grenville Library, by George Bullen
1924 Guide to the exhibition of historical medals in the British Museum
1924 A guide to the exhibition of medals of the Renaissance in the British Museum, by G.F. Hill
1975 2000 years of coins and medals, by J.P.C. Kent (
1979 Art of the Medal, by Mark Jones
1986 Money: from Cowrie shells to credit cards, by Joe Cribb
1987 Contemporary British Medals, by Mark Jones
1987 As good as gold: 300 years of British banknote design, by Virginia Hewitt and John Keyworth
1990 Fake? The art of deception, by Mark Jones
1992 FIDEM XXIII: In the Round: Contemporary Art Medals of the World, ed. Philip Attwood
1993 Silk Road coins: the Hirayama Collection. A loan exhibition at the British Museum, by Katsumi Tanabe
1993 The Hoxne Treasure: an illustrated handbook, by Roger Bland and Catherine Johns
1994 Beauty and the Banknote: images of women on paper money, by Virginia Hewitt
1995 The Banker’s Art, ed. Virginia Hewitt
1996 After Marathon: war, society and money in fifth century Greece, by Ute Wartenberg
1998 Humphrey Cole: Mint, measurement and maps in Elizabethan England, ed. Silke Ackernann
1998 Convict love tokens: the leaden hearts the convicts left behind, by Michele Field and Timothy Millet
1999 Magic coins of Java, Bali and the Malay Peninsula, thirteenth to twentieth centuries, by Joe Cribb
1999 Metal Mirror: Coin Photographs, by Stephen Sack
1999 Size immaterial: handheld sculpture of the 1990s, by Luke Syson
2000 Rebels, pretenders and imposters, by Clive Cheesman and Jonathan Williams
2003 Italian Medals c. 1520-1600 in British public collections, by Philip Attwood
2004 Badges, by Philip Attwood
2008 Chairman Mao badges: symbols and slogans of the Cultural Revolution, by Helen Wang
2009 Medals of dishonour, by Philip Attwood and Felicity Powell
2010 Money in Africa, ed. by Catherine Eagleton, Harcourt Fuller and John Perkins
2011 Eric Gill: Lust for Letter & Line, by Ruth Cribb and Joe Cribb
2013 Coins and the Bible, by Richard Abdy and Amelia Dowler
2014 Hard at Work: The Diary of Leonard Wyon 1853-1867, by Philip Attwood
2015 Hoards: Hidden History, by Eleanor Ghey
2016 Defacing the Past, by Dario Calomino

The British Museum, located in the Bloomsbury area of London, United Kingdom, is a public institution dedicated to human history, art and culture. Its permanent collection numbers some 8 million works, and is among the largest and most comprehensive in existence having been widely sourced during the era of the British Empire, and documenting the story of human culture from its beginnings to the present. It’s the first national public museum in the world.

The British Museum was established in 1753, largely based on the collections of the physician and scientist Sir Hans Sloane. The museum first opened to the public on 15 January 1759, in Montagu House, on the site of the current building. Its expansion over the following two and a half centuries was largely a result of expanding British colonisation and has resulted in the creation of several branch institutions, the first being the British Museum of Natural History in South Kensington in 1881 (it is nowadays simply called the Natural History Museum).

In 1973, the British Library Act 1972 detached the library department from the British Museum, but it continued to host the now separated British Library in the same Reading Room and building as the museum until 1997. The museum is a non-departmental public body sponsored by the Department for Digital, Culture, Media and Sport, and as with all other national museums in the United Kingdom it charges no admission fee, except for loan exhibitions.

In 2013 the museum received a record 6.7 million visitors, an increase of 20% from the previous year. Popular exhibitions including “Life and Death in Pompeii and Herculaneum” and “Ice Age Art” are credited with helping fuel the increase in visitors. Plans were announced in September 2014 to recreate the entire building along with all exhibits in the video game Minecraft in conjunction with members of the public.