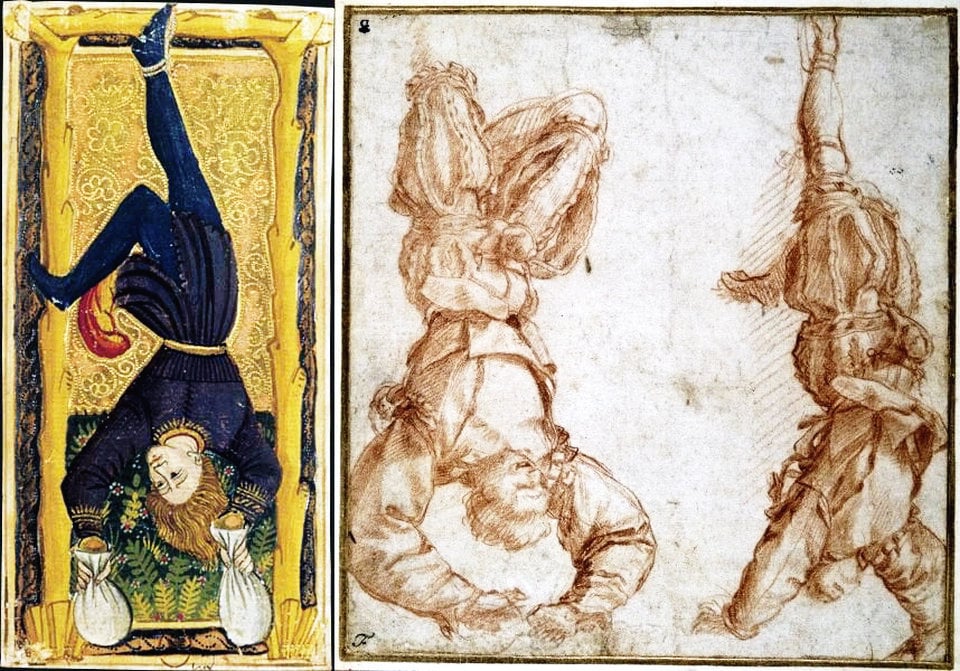 Pittura infamante (Italian for “defaming portrait”) is a genre of defamatory painting and relief, common in Renaissance Italy in city-states in the north and center of the Italian peninsula during the Trecento, Quattrocento, and Cinquecento. Popular subjects of pittura infamante include traitors, thieves, and those guilty of bankruptcy or public fraud, often in cases where no legal remedy was available. Commissioned by governments of city-states and displayed in public centers, pittura infamante were both a form of “municipal justice” (or “forensic art”) and a medium for internal political struggles.

According to Samuel Edgerton, the genre began to decline precisely when it came to be regarded as a form of art rather than effigy; the power of the genre derived from a feudal-based code of honor, where shame was one of the most significant social punishments. As such, pittura infamante has its roots in the doctrines of fama and infamia in ancient Roman law.

Display
Pitture infamanti could appear in any public place, but some places were more frequently adorned with them; for example, the first floor exterior of the Bargello periodically contained numerous, life-size, pittura infamante frescoes. Florentine law required the podestà have such caricatures painted, and accompanied by verbal identification those held in contempt of court for financial offenses (bad debt, bankruptcy, fraud, forgery, etc.). Pitture infamanti were far more common in Republican Florence than in autocratic city states, whose rulers often deemed them to be sources of “disrepute.”

Shame and honor
The goal of the image productions was to literally hang out people who thought they were out of line with the accepted. The public shame they incurred was regarded as the worst social punishment. If it were not possible to hit the person with legal sanctions, he could resort to defamatory paintings by the public to public appearance by the so-called extension in effect. The portraits were often clean orders, procured by the governors in the city states. Thus, pittura infamante also served as a form of “municipal justice”. )

The expression and method of production came from a feudal idea of shame. To lose face was considered to be the most significant form of public punishment. At this point, pittura infamante can also be said to be taught on the doctrine of fama and infamy in ancient Roman law.

To hang up after one leg should also be an expression of winding.

Medium in power struggle
The theme invited almost to harselas over political opponents. In such cases, Pittura infamante was abused as a means of power, and often led to bitter internal struggles, because they played a crucial role in purely political controversies.

According to Edgerton, the genre lost its reputation and declined in popularity as soon as it began to be grown as an independent art form. The professionalism of the performance drew attention away from the original idea that the images would represent a penalty in effigie.

Decoration and manufacture
Pittura infamante could act anywhere in public places, but some buildings were of course in more frequent use than others. A place that was continually decorated with a rich number of pittura infamante in full body size was Palazzo del Bargello. Florentian laws demanded that podestà had such caricatures painted by people who committed financial defaults (had unpaid debts, went bankrupt or drove fraud, falsification and the like), and accompanied by a verbal identification of those who contempted the law. etc.). Pittura infamante was far more common in Florence, where the rulers considered the images to be the very source of “plain reputation.”

Pittura infamante could, of course, have more favorable portraits as a starting point, and in such cases the effect was all the more because the artist additionally gave a sarcastic comment to a familiar representation. By putting habitual relationships on the head, something similar to the description of mundus inversus (“reverse worlds”) is emphasizing that one emphasizes the contrast to the common perception and humiliation of a shadow thrown over its former radiance.

Themes
Common themes of pittura infamante—which were meant to be humiliating—include depicting the subject as wearing a mitre or hanging upside down, being in the presence of unclean animals such as pigs or donkeys or those deemed evil like snakes; pittura infamante would also contain captions listing the offenses of the subject. Pittura infamante could originate as more favorable depictions, only to be transformed after the subject had fallen out of favor.

Imagery
Pittura infamante always depicted men and never women, and generally depicted upper class men (who would have the most to lose from character assassination). The act of hanging itself was also significant, as affluent criminals would generally be afforded the privilege of beheading rather than hanging; hanging was also shameful in religious contexts (e.g. Judas). The topos of mundus inversus (“world upside down”) is often associated with comedy and humiliation.

Records
Documentary evidence for pittura infamante outside Italy is rarer but existent. For example, records support the use of “very unpleasant pictures” painted on cloths during the Hundred Years War and the reign of Louis XI in France, and—later—in England and north Germany.

Pitture infamanti were the counterpoint of another contemporary form of secular, full-length portrait: uomini famosi (“famous men”) or uomini illustri (“illustrious men”), which depicted figures from the Old Testament or Antiquity in a positive context, generally on the interior of private or civic buildings as moral exemplars.

Subjects of pittura infamante
Bologna
Konrad von Landau, painted on the walls of Bologna for treachery; in response Landau created his own “pittura infamante” on the saddle of his horse, depicting the local politicians hung upside down by their feet in the hand of a giant whore.

Fermo
Rinaldo da Monteverde, the papal governor of Fermo, “fell victim to humiliating popular justice” in the form of a pittura infamante.

Florence
Niccolò Piccinino, in the Palazzo della Signoria in 1428, which depicted him hanging upside-down in chains; “depaint” in April 1430. Hanging upside down by one foot was a common theme for pittura infamante of condottieri who switched sides.
The eight Pazzi conspirators, on the wall above the Dogana by Botticelli, commissioned by the Otto di Guardia in 1478; visible from the Sala dei Gigli until its effacement in 1494.
Ridolfo di Camerino, “traitor to the Holy Mother Church, to the popolo and commune of Florence and to all its allies,” painted upside down on a gallows, hanging by his left foot on the facade of the Army Pay Office with a siren on his left and a basilisk on his right while still wearing his mitre (circa October 13, 1377).
Rodolfo II da Varano, who defected to the papacy during the War of the Eight Saints, depicted on a gallows attached to the neck of a devil.

Milan
Reliefs of Frederick Barbarossa and Beatrice of Burgundy set on the Porta Romana and Porta Tosa, Milan.