The palace of Pedro I, also called the palace of King Don Pedro and the Mudéjar palace, is part of the monumental complex of the Royal Alcázar of Seville.

It was built next to the Gothic palace of Alfonso Xat the initiative of King Pedro I, between 1356 and 1366, in its construction artisans from Toledo, Granada and Seville themselves collaborated, later it was transformed in the time of the Catholic Monarchs and the first Austrias. According to archaeological investigations, the palace of King Pedro constituted a project for a new floor plan, which was erected in a place where previous buildings existed.

This palace was born to serve as a private building for King Pedro I, in front of the most formal character represented by the Gothic palace, built in the previous century by order of Alfonso X, especially in Tordesillas and Seville, he used Arabic epigraphy to extol its virtues. This is because, from the fourteenth century, the Castilian monarchs stopped copying European trends to be inspired by Andalusian models. This made this palace of Pedro I lodge diverse writings in Arabic extolling its figure.

The interior is structured around two unit, one dedicated to the official life that is located around the courtyard of the Doncellas and another to the private one around the courtyard of the Dolls. Walking along the galleries and rooms decorated with beautiful tiles and admiring the beautiful Mudejar ceilings, from the lobby you reach the Patio de las Doncellas, the main patio, a masterpiece of Andalusian Mudejar art. From the entrance to the courtyard of the maidens we find the Royal Alcove on the right, opposite is the Ambassadors room and on the left the Ceiling room of Carlos V. On the upper floor of the palace are the royal apartments, redecorated in the XVIII century.

The wood used in the coffered ceilings, the doors with lattices and the window frames are usually made of pine. These lacerías are golden or polychrome. It has a first floor that does not extend throughout the ground floor, but only for some rooms.

Facade
The main facade is in the Montería courtyard. At the top is a large wooden eaves, supported by golden muqarnas. Below is a tile mural with an Arabic inscription that speaks of the year the building was completed. This mural is bordered by an inscription in Gothic characters that says: ” The very tall and very noble and very powerful and very conqueror Don Pedro by the grace of God, King of Castile and León, ordered these fortresses and these palaces et these covers that was dated in the era of mill et quatro hundred y dos años. ” 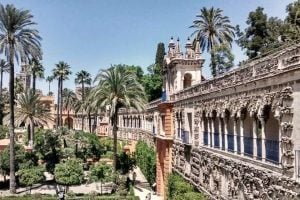 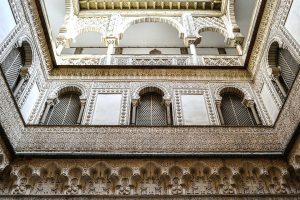 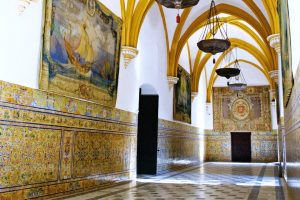 Patio of the Dolls
The cover gives access to a hall, from which a corridor leads to the patio of the Dolls. It is believed that this area of the palace was intended for the queen, this being a domestic courtyard. It underwent a reform between 1847 and 1855. In this reform, a cornice with muqarnas and a neo-Mudejar mezzanine were added between the ground floor and the first floor. This reform was led by Juan Manuel Caballero and José Gutiérrez. The current ten marble columns were made by the marble worker José Barradas in that reform.

The name of “the Dolls” is ancient. In 1637 the historian Rodrigo Caro speculated that it could be called that because it was there where children were raised or because it was a very small patio. Currently it is believed that it may be due to the faces of girls or dolls at the beginning of the arches.

Prince’s room
It is accessed through the north gallery of the Patio de las Muñecas. It receives this name from Juan de Trastámara, son of the Catholic Monarchs, born in the Alcázar in 1478. On the roof there is heraldry of the Catholic Monarchs. The room is divided with plaster arches into three rooms. According to the chronicles of the time, it was in this room that Queen Elizabeth gave birth to Prince John, her ill-fated heir.

Courtyard of the Maidens
It is a 21×15 meter rectangular patio surrounded by four galleries; two of seven and two of five arches. In the center there is a swimming pool with large beds sunk one meter on both sides. The sides of these flower beds are decorated with interlocking semicircular arches. The lobed arches are decorated with sebka and plaster reliefs. Between 1580 and 1584 all this was buried and a marble paving was laid, for which artisans from Macael, Espera and Achan were brought. flowerbeds and pool were discovered in some archaeological studies in 2002.

Around the ground floor there were some rooms that were accessible to guests, while on the upper floor there were only private rooms. The upper floor of this courtyard was renovated between 1540 and 1572. The semi-circular arches supported by marble columns with Ionic capitals made in Genoa by Antonio María Aprile da Carona and Bernardino da Bissone date from this time. The columns on the ground floor were replaced between 1560 and 1569 by others carved in the same Italian city by Francisco and Juan Lugano and Francisco da Carona. In 2020 the carpentry of gates and windows was restored.

Alcoba Real
The Alcoba Real, which was also called the bedroom of the Moorish Kings, has its access from the courtyard of the Doncellas. The interior is divided into two rooms, which are connected by an entrance with three horseshoe arches. The first room accessed from the courtyard, known as the Lost Steps room, has a coffered ceiling from the reign of the Catholic Monarchs.

Its walls have plasterwork friezes and is covered by a 15th century coffered ceiling. The doors leading to the patio are decorated with lacework, among which figures of six arms with a circular shape stand out. The two windows of this room are decorated with stars and eight-armed wheels.

Carlos V Roof Hall
From the Patio de las Doncellas you can also access the Carlos V Roof Hall. It has wooden doors with Mudejar lattices. In the center of the gates are geometric figures with eight arms in the form of wheels. The two shutters of this room are decorated with four, six and eight-pointed stars.

Ambassadors Hall
The entrance doors from the patio de las Doncellas are from the 14th century. They are made of wood with geometric lattices decorated with plant motifs. In the central parts of the gates there are figures of eight and twelve arms in the shape of wheels. They have a lefe path on the margins. They indicate the completion date of the Mudéjar palace; 1364. On the outside they have inscriptions in Arabic praising the lord of the palace and, on the top of the inner side, there are phylacteries with Gothic characters in Latin with Psalm 54 and the beginning of the Gospel of Saint John.

The Ambassadors’ Hall is the most sumptuous place in the palace. Here was the Al-Turayya hall, also referred to as the Pleiades of the Al-Mubarak Keep and the Al-Motamid Blessing. The current room corresponds to the construction of Pedro I. It has a square plan (qubba) and is covered by a golden hemispherical dome. This type of dome responds to a model that is called “better half”. The dome was made by Diego Ruiz in 1427. Under the dome is a Gothic frieze with portraits of monarchs. This wooden frieze is medieval, but the portraits were replaced in a reform that took place between 1599 and 1600. There are 56 tables painted by Diego de Esquivel in chronological order, from Chindasvinto to Felipe III. Pedro I is located in the southern half of the wall.

In them, the kings, identified by name, appear seated and crowned; in the right hand they carry a sword and in the left a globe; at a lower level is his coat of arms and, below, his period of reign. Above the series there is a continuous frieze with the coat of arms of Castilla y León.

The walls, as in other rooms of the palace, are decorated with tiles and plasterwork. At the top of the living room there are wooden balconies built in the late sixteenth century. On two sides there are entrances with two marble columns that support triple horseshoe arches.

Next to this room there are two rooms, one to the north and the other to the south, in which cut and profiled gypsum plates are distributed so that the figures represented stand out against the ataurique background. In the north room they measure approximately 50 centimeters, and are somewhat larger in the south room. In both rooms the plaster plates represent kings, princes, knights, ladies, tournaments and fantastic animals. These scenes may be inspired by the Book of the Montería, written by Alfonso XI, and in the Trojan Chronicle. This chronicle was commissioned by Alfonso XI and carried out by the scribe and miniaturist Nicolás González. Gonzalez finished it in December 1350, when Alfonso XI had already been succeeded by Peter I.

Philip II Roof Hall
It is accessed through an entrance in the Ambassadors Hall. That entrance is known as the Pavones arch, for having bird decoration. It is a rectangular room with a mullion that overlooks the Prince’s garden.

Second floor
The second floor of the Mudéjar palace was built in the 14th century by Pedro I, although it was renovated by the Catholic Monarchs and in the 19th century.

It is known as the Royal High room. There are various rooms for the use of monarchs. In the room that served as a dining room in the 19th century there is a painting by Murillo, El milagro de san Francisco Solano y el toro.

Among these rooms located on the upper floor of the palace, the Oratory of the Catholic Monarchs stands out, where there is the altar and tile altarpiece of The Visitation of the Virgin made in 1504 by the Italian ceramist Francisco Niculoso Pisano.

Royal Alcazar of Seville
The Real Alcázar of Seville is a walled palatial complex built in different historical stages. Although the original palace was built in the High Middle Ages, some vestiges of Islamic art are preserved and, from the period after the Castilian conquest, a Mudejar palatial space and another in the Gothic style. In later reforms, Renaissance, Mannerist and Baroque elements were added.

The Alcázar of Seville is a royal palace in Seville, Spain, originally developed by Moorish Muslim kings. The palace is renowned as one of the most beautiful in Spain, being regarded as one of the most outstanding examples of Mudéjar architecture found on the Iberian Peninsula. The upper levels of the Alcázar are still used by the royal family as the official Seville residence and are administered by the Patrimonio Nacional.

It is the oldest royal palace still in use in Europe, and was registered in 1987 by UNESCO as a World Heritage Site, along with the adjoining Seville Cathedral and the General Archive of the Indies.