The ends of the two wings of the administration building facing the street are wider than the rest of the block, and inside it houses two noble rooms. These are spaces that were originally three stories high, similar to the auditorium. These majestic spaces were damaged during the twentieth century, creating intermediate floors that provided a more functional use of the space, relegating the spectacular ceilings to the spaces located on the third floor. Specifically, next to the east, next to Pare Claret street, was the Cambó library and, to the west, a management space that was originally dedicated to the archive room.

The Cambó library is a very elaborate space with a lot of symbolism. It has two large vaulted vaults of Mudejar inspiration, very compartmentalized, combining brick and ceramics to achieve a symbolism with the usual references: Gil, “P”, patent cross, shield of Paris, shield of the Holy Cross, etc.. This is the most original room in the whole, both in shape and color, which refer to the vaults of the golden chamber or the tower of the Infants of the Alhambra.. The vaults combine, with a Mudejar design, tiles and ceramic pieces with floral and zoomorphic designs, heraldic drawings and the hospital’s iconographic repertoire, made in white and blue. The finish of the shells with muqarnas increase the feeling of watching a roof palace in Granada. The design of the ceramic pieces is by Francesc Madurell.

The Archive’s space, located at the end of the west wing, next to Cartagena Street, is currently undergoing rehabilitation and has recovered its original morphology. Highlights are made of painted ceramics, imitating the sun’s rays with white clouds in the center, surrounding the coat of arms of the hospital and of the apostle Saint Paul. Ceramic ribbons form stellar structures with floral ends at the tips. The room has a large stained glass window that occupies much of the high wall.

Administration Building
The administration building is located just behind the main entrance and gives the official image of the complex. Its façade is the most decorated in the whole and is the tallest, as well as being topped by a tower that gives it an imposing air.

Here Domènech took the opportunity to display the use of ceramics and ornamental mosaics and a large sculptural ensemble. He took advantage of the religious nature of the institution that had to manage the hospital, to unfold an iconography that covered the different sensitivities of the historical hospitals that formed the institution, and emphasized the beneficial nature of the new hospital. His mastery of Christian symbolism and heraldry allowed him to be the author of the designs to the smallest detail.

He was soon criticized for setting up a hospital which “had more the air of residence for royalty, than for the stay of ‘poor patients’, and on the occasion of its official inauguration, Alfonso XIII himself said:’ You are the locals are paradoxical, a palace is set for your sick and a block for your king. ” 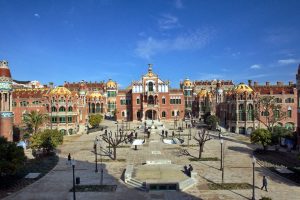 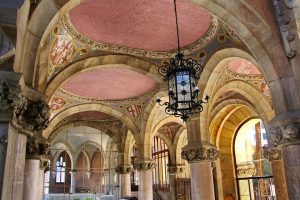 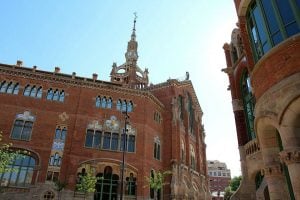 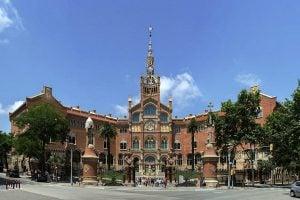 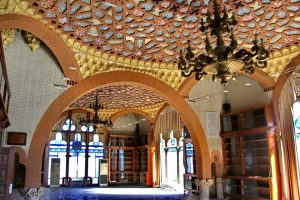 The building consists of three bodies. The central, with most of the iconography on its façade, contains the most institutional spaces and on which the clock tower stands; both sides are slightly angled relative to the central one, giving the whole of a receptive concavity, as is its main access function. The space between the street fence and the access to the building provides the distance that allows to observe the majesty of the complex and has a discreet gardening surrounding the double staircase that leads from the street to the porch of the building. In the center of the stairs and presiding over the entrance is the monument to the patron Pau Gil, a set of

The structure of the two lateral bodies is three levels and has a less sumptuous decoration than the central body, with large windows glazed at the level of the ground floor, twin windows on the first floor and trilobules on the second. In both buildings, the end facing the street is wider than the rest of the block and inside it houses noble rooms; to the east is the Cambó library and to the west is the archive room, spaces that were damaged with a “more functional” use during the 20th century and are currently being restored.

Hospital of the Holy Cross and Saint Paul
The Hospital de Sant Pau is located in a complex of buildings located in Barcelona, designed by the architect Lluis Domenech i Montaner, one of the main representatives of Catalan modernism. It was built between 1902 and 1930 in two phases: the first by Domènech himself, between 1902 and 1913, it consists of thirteen modernist buildings; the second, made by his son Pere Domènech i Roura from 1920It consists of six other buildings of moderate modernism and other later buildings. With its main building and its numerous pavilions, the Hospital de San Pablo is, together with the Pere Mata de Reus Institute (also by the same architect), one of the largest ensembles of Catalan modernist architecture.

The Sant Pau Art Nouveau Site, formerly the Hospital de la Santa Creu i Sant Pau, is one of the most prominent buildings of modernist architecture in Barcelona. Its author, the architect Lluís Domènech i Montaner, was responsible for building another of the main modernist buildings in Barcelona, the Palau de la Música. Both were declared World Heritage by UNESCO in 1997, valuing their uniqueness and beauty.

The Modernist Site is the largest architectural ensemble of this style in Europe and is one of the main examples of Catalan modernism. Domènech devised a “city within the city” with pavilions surrounded by gardens and connected by a network of underground tunnels.