The International galleries offer an opportunity to experience major works from the Gallery’s collections in new contexts, and include early European religious painting, British portraits, Dutch painting, and East Asian and European porcelain. From the influence of Japanese art on French Modernism to the representation of daily life, the display explores rich dialogues across time and between cultures, punctuated with contemporary works that engage with these themes and histories.

Gradual shifts in pattern, colour and technique can be traced across thousands of years in ceramics from China, Japan, Korea and South-East Asia, along with the presence of shared motifs, technological developments, and the marks of artistic influence that have spread through ages and across cultures. 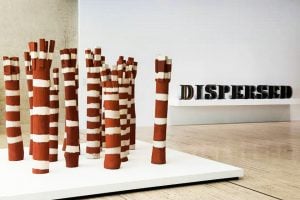 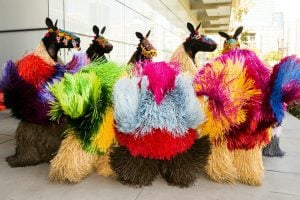 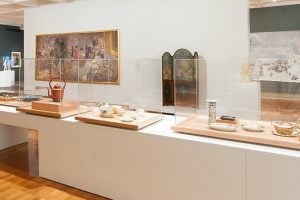 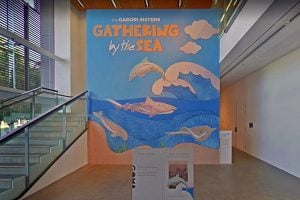 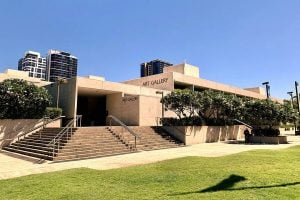 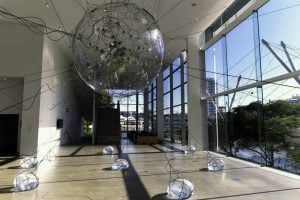 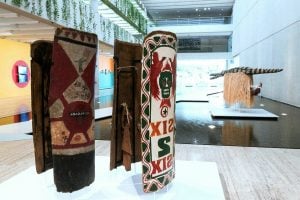 Also on view are personal treasures and revered courtly art, shedding light on various approaches to medium and form, enduring narratives, knowledge and beliefs that continue to influence the region’s artistic traditions.

Asian Art Collection
Asian artists have made decisive contributions to the development of global contemporary art, often by drawing on local concerns and traditional forms, philosophies and techniques.

The Gallery’s Contemporary Asian art collection is among the most extensive of its kind in the world, comprising over 1000 works from the late 1960s to the present which shed light on modern historical developments, current environments of social change and evolving models of artistic production. The Gallery acquires the work of leading artists from all parts of Asia and the Asian diaspora. Contemporary Asian holdings have been shaped by the Asia Pacific Triennial of Contemporary Art since 1993, including the APT’s commissioning and collecting agenda which keeps the collection dynamic and up to date.

Significant moments in the twentieth and twenty-first century Avant-garde are represented in the Collection by works such as Xu Bing’s A book from the sky 1987–91, Nam June Paik’s Global groove 1973 and TV Cello 2000, and in works by Yayoi Kusama, Lee Ufan and Ai Weiwei.

The Gallery’s historical Asian art highlights significant artistic developments across the region from the Neolithic period to the twentieth century, exploring diverse media, philosophies and techniques through painting, printmaking, sculpture, ceramics, textiles, metalware, lacquerware, photography and furniture. It draws attention to the importance of cultural exchange in the continuing development of Asia’s aesthetic traditions, and contextualises the Gallery’s contemporary Asian collection.

Asian Ceramic Traditions
Asia’s ceramic traditions are among the world’s earliest and most influential. Forming an introduction to these is a group of Neolithic jars from Japan’s Jōmon (3000–2000BCE) and Yayoi (400–300BCE) cultures. A group of two kuan (storage jars) and one amphora from China’s Neolithic Yangshao culture (3500–3000BCE) complement this collection, allowing for dialogue regarding the development of ceramics in Asia. Broader holdings of Chinese ceramics mark important artistic periods and styles, including Tang dynasty (618–907) burial ware, celadon from the Yuan (1279–1368) and Ming (1368–1644) dynasties, blue and white wares from the Kangxi period (1662–1722) and a selection of porcelain including imperial works from the Qing dynasty (1644–1912).

A group of tsubo (lidless jars) from Japan’s Six Old Kilns (the Tokoname, Seto, Shigaraki, Tamba, Bizen and Echizen kilns), dating from the Muromachi (1333–1573) and Azuchi–Momoyama (1573–1603) periods represent some of the formative ceramic traditions in Japan as well as engaging with the Japanese tea ceremony and Zen aesthetic ideals. Works by Zen practitioners, such as ceramics by the Buddhist nun Otagaki Rengetsu (1791–1875) and calligraphy and ink paintings on scrolls by Gempo Yamamoto (1866–1961), Shoun (Gempo Sohan) (1848–1922) and Deiryu (Sojun Kanshu) (1895–1954) further illustrate the importance of religious belief in Japanese artistic tradition. A small collection of Imari porcelain and Satsuma ware conveys the importance of export ware and exchange with Europe in the nineteenth and early twentieth centuries.

Japanese Painting
Philosophy and poetry have played decisive roles in the development of many Asian artistic traditions, and in particular, those of Japanese painting. A superb pair of Japanese screens attributed to the Hasegawa School, active in the Edo period (1600–1868), and a pair by Tosa Mitsuatsu (active 1734–64) depicting scenes from the influential literary text Genji Monogatari (Tale of Genji) exhibit the significance of philosophical and poetic ideals. Further examples of Japanese screens represent some of the major painting schools and the influence of neighbouring artistic traditions, as in Kano Yasunobu’s (1613–85) Birds and flowers of the four seasons and the dramatic ink landscapes featuring the Chinese poet–scholars Li Bai and Lin Bu by Unkoku Toeki (1591–1644).

International Art Collection
The Gallery’s collection of works from Europe, Africa and North and South America includes early European paintings and works on paper, with an emphasis on the Northern Renaissance; British art from the late-18th to late-19th century, including Victorian and Edwardian painting; and modern European and American painting, sculpture, photography and prints from the late 19th century to the second half of the twentieth century. The contemporary international art collection reflects the increasingly fluid and porous nature of the contemporary art world. In tandem with the Australian and Asian collections, it facilitates collection displays that trace lines of influence and dialogue across different cultures and historical periods.

History
The Gallery’s historical international art collection focuses on Western European and North American work spanning approximately five centuries, from the early Renaissance to the second half of the twentieth century. European painting, sculpture, prints and drawings constitute the majority of the over 2000 works in this area, and approximately half the works are British. The initial donations and bequests were made in the late nineteenth century and the Gallery’s first purchase, British artist Blandford Fletcher’s Evicted 1887 in 1896, remains one of its most popular paintings.

The collection of international work made post-1975 includes some of the QAGOMA Collection’s signature works, with strong holdings of international sculpture post-1990. Many of these works seek to question and redefine the discipline by using unconventional materials or investigating the overlaps between sculpture and other disciplines such as video, performance and painting. Film, video and photography have constituted areas of focus in the development of the International Art Post-1975 Collection. The largest single area of the collection is a group of over 200 prints and multiples from the Fluxus movement, an important influence for many contemporary artists.

The European collection was established with a bequest of 17th century Dutch paintings to the state of Queensland in 1892 by pastoralist and legislative councillor Thomas Lodge Murray-Prior. It has expanded to include still lifes, landscapes and religious images by Alexander Coosemans, Jan Breughel the Younger, Cornelis de Briers and after David Teniers the Younger. Since 1979, the Queensland Art Gallery Foundation has enabled the purchase of Old Master works such as the panel painting by the Master of Frankfurt, Virgin and Child with Saint James the Pilgrim, Saint Catherine and the Donor with Saint Peter c.1496, Tintoretto’s Cristo risorgente (The risen Christ) c.1555, Young woman in a fur wrap (after Titian) c.1629–30 by Peter Paul Rubens and Anthony Van Dyck’s Portrait of Marchese Filippo Spinola c.1622–27.

A major donation of funds in 1959 by Major Harold de Vahl Rubin enabled the Gallery to purchase works by Pierre-Auguste Renoir, Edgar Degas, Henri de Toulouse-Lautrec and Maurice de Vlaminck, as well as three paintings by Pablo Picasso. His La Belle Hollandaise 1905 was painted in the small provincial town of Schoorl, Holland, and is recognised as an important transitional work for Picasso as he turned from the academicism of his past to the radical stylistic experimentation of his Paris years.

A group of over 200 Fluxus prints and multiples donated by Francesco Conz in 1995 and 1997. Produced and editioned in the 1980s and 1990s, the majority are by artists associated with the Fluxus movement of the 1960s and 1970s and are an important bridge between the Gallery’s pre-1970 and contemporary international art collections. Pointing to a current of modernism that emerged in the early twentieth century with Marcel Duchamp and Dadaism, their irreverent humour and engagement with a semantic dimension continues to inform contemporary artists.

Queensland Art Gallery was established in 1895 and moved to its current residence at South Bank in 1982. It was joined by the Gallery of Modern Art in 2006 and the galleries now house a globally significant collection of contemporary art from Australia, Asia and the Pacific.

The experience of a visit starts when the striking architecture of our riverside galleries comes into view. Glimpses of Brisbane continue to anchor you to our subtropical city from inside each gallery, while ever-changing exhibitions, programs and events broaden your horizons.

Queensland Art Gallery is also home to a Children’s Art Centre that presents interactive artworks for kids and families, a cinema that celebrates film from around the world, plus gallery shops with art, books and cultural curios to take home. Every visit is a conversation starter, and our outdoor cafes and award-winning restaurant offer places for stimulating discussion.