This large hall takes its name from the numerous pillars of reinforced cement which once supported the three boilers in the Boiler Hall on the floor above. Several hoppers are also visible in the ceiling, similar to the truncated-pyramidical funnels, which were filled with the cinders from the coal used to feed the boilers.

A hatch in the lower part of the hoppers allowed the cinders to be recovered, collected in carts and carried on the communal trucks of the Garden Services to be used in the gardens and parks of Rome for drainage. 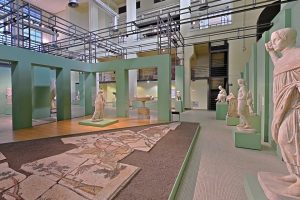 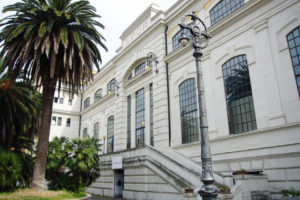 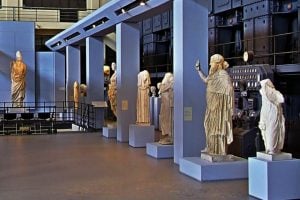 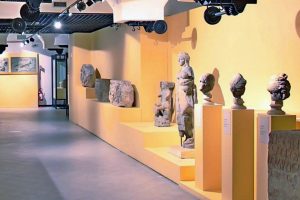 The faces of the Republic
In a long gallery are hung a series of portraits dating to the Ist century BC, giving the likenesses of individuals from the various social classes. Branded slaves and members of the plebian classes are shown alone or in family groups in the funerary reliefs carved on the faces of the tombs, while the statue of the so-called ” Barberini wearing a toga ” supporting the images of ancestors reflects its patrican family origins. Among the portraits of famous people Caesar, Augustus and Agrippa are lined up.

Republican Rome
The Museum preserves extraordinary evidence relating to the origins of the city of Rome. Rich funerary furnishings testify to the fruitful cultural climate of Rome of the archaic age and the development of commercial exchanges with Etruria and Greece, attested by precious imported objects.

Some unique pictorial decorations from aristocratic chamber tombs of the middle republican age are also exhibited: it is an exceptional fragment of fresco from the Tomb of the Fabii, depicting military scenes related to the Samnite wars (first half of the third century BC) narrated according to style of Roman triumphal painting and paintings with scenes of combat and triumphal procession from the cd. Aries tomb.

The Complex of San Lorenzo
A coherent group of sculpture in peperine (a stone from the Albani Hills), broken into fragments which were then reused in a renaissance wall, discovered near the Church of San Lorenzo. Several of these statues, brought together in the Capitoline collections, represent female figures, Orpheus among the animals, and a barbarian; they are carefully worked, using Hellenistic models of the Pergamon school from the late IIIrd – early IVth centuries BC.

The complex should probably be associated with a temple of Herakles, as should the peperine base from the same area, inscribed with a dedication by the dictator M. Minucio, who was victorious against Hannibal in 217 BC.

The luxury
The precious objects that were brought to Rome from Greece and the Hellenistic world as spoils of war from the IInd century BC onwards influenced the fashions of the richest classes, introducing luxury objects produced to these models, to the private sphere. Among the objects of high artistic quality and precious materials used in funerary contexts, the remains of a bone bed are outstanding. It is decorated with scenes of the infancy of Dionysus, conserved together with the ashes of the dead in an alabaster urn from the Esquiline, and a brinze funerary bed from Amiterno, with elegant inlays of copper and silver.

The bronze panels from which the so-called Capitoline stretcher has been reconstructed and the polychrome mosaic of sea animals enclosed in acanthus spirals both come from private homes.

From myth to miracle
The sector, inaugurated in December 2017, is dedicated to the exhibition of some Roman sarcophagi, so far largely preserved in the museum’s deposits. The path presents precious artifacts decorated with figures referable to the world of myth: these were often used to describe the different qualities of the deceased, or more generally to allude to the happiness of the afterlife through the re-enactment of a peaceful and happy world.

The sector ends with Christian sarcophagi, in which new figurative repertoires were introduced, focusing on the doctrines preached by Christ and the apostles

Montemartini power plant
The Montemartini power station was a thermoelectric power plant on the Via Ostiense in Rome. Following its decommissioning as an electricity production plant, it is now used as a museum forming part of the museum system of Roma Capitale called Musei in Comune. It houses about 400 Roman statues, already exhibited in the Capitoline Museums or recovered from the rich municipal deposits, together with epigraphs and mosaics, in an extraordinary setting of industrial archeology.

The history of the new exhibition space for the Musei Capitolini in the former Giovanni Montemartini Thermoelectric Centre, an extraordinary example of industrial archaeology converted into a museum, began in 1997 with the transfer of hundreds of sculptures to the new location during the restructuring works carried out across much of the Capitoline complex.

To create space in the Museum of the Palazzo dei Conservatori, the Museo Nuovo and the Braccio Nuovo, while keeping the works of art accessible to the public, an exhibition was created in 1997 in the restructured rooms of the first public electricity plant in Rome. The exhibition was entitled “The machines and the gods”: it put side by side two diametrically opposed worlds, those of classical art and industrial archaeology. In an atmospheric game of contrasts, the old machinery of electricity production became the backdrop for masterpieces of ancient sculpture and precious goods found in the excavations of the late nineteenth century and the 1930s. The display reconstructs some of the great monumental complexes and illustrates the development of the ancient city from the Republican era to the late imperial age.

The adaption of the building into a museum, the restoration of the machines and the educational sections about industrial archaeology have all been created by ACEA. The outstanding museum space was originally thought of as a temporary solution. However when part of the sculptural collection was returned to the Campidoglio in 2005, on the conclusion of the restructuring works, it was decided to turn the building into a permanent location for a collection of the Museio Capitolini’s most recent acquisitions.

The space is used for continual experiments in possible display methods, particularly those connected to scientific research on the remains; bringing together works from the same area of provenance also allows the links between the museum and the fabric of the ancient city to be continually renewed. The museum itself is part of a wider project to redefine the Ostiense Marconi area, converting it into a cultural centre for the oldest industrial area of Rome (including, as well as the electricity plant, the Slaughter House, the Gasometer, structures from the docks, the old Mira Lanza site and the old General Markets), with the defining structure of the university campus of Roma Tre.