The building that houses the museum dates back to the 17th century, and had been purchased by Giuseppe Pezzoli, ancestor of Gian Giacomo Poldi Pezzoli, in the late 18th century.

The architect Simone Cantoni (1736-1818) had adapted it in neoclassical style, with a large English garden full of statues and fountains. Between 1850 and 1853 Gian Giacomo entrusted Giuseppe Balzaretto (1801-1874) with a further modification, simultaneously with the renovation of his apartment. 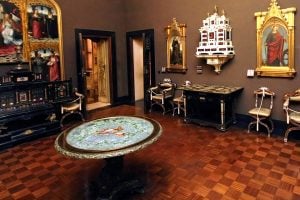 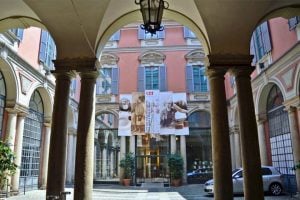 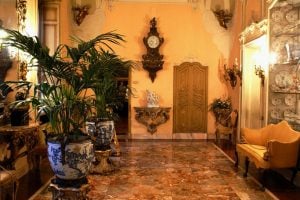 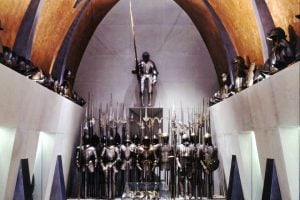 Entrance
Milan: the museum entrance overlooks the internal courtyard of the homonymous Palazzo Pezzoli in via Manzoni 12, formerly known as via del Giardino. Before the entrance to the courtyard, which dates back to 1960, was opened, visitors had access to the Museum from the door of via Morone, a side street of via Manzoni. At the entrance visitors are greeted by the portrait of Gian Giacomo Poldi Pezzoli.

Arms room
The Sala d’Armi was the first room in the Casa Museo and was located on the main floor, in the Sala Trivulzio. The current set up, from 2000, is the work of the great sculptor Arnaldo Pomodoro, who interprets the theme of the armory by enhancing its historical identity.

Gian Giacomo Poldi Pezzoli, passionate collector of ancient weapons, had entrusted the first works to the architect Giuseppe Balzaretto and the scenographer Filippo Peroni, with thecollaboration of Paolo Gazzoli for the stuccos and Pompeo Bertini for the windows. The theatrical effect of the Neo-Gothic style dominated the hall, crowded with banners, weapons, armor, trophies, shop windows and mannequins.

The environment was completely destroyed during the Second World War, and the precious objects transferred to the ground floor. The collection consists mainly of pieces from the Milanese and Brescia Renaissance, with particular attention to parade weapons. A second important group consists of German firearms from the sixteenth and seventeenth centuries.

The Sala d’Armi was built in neo-Gothic style between 1846 and 1851 by the painter-scenographer Filippo Peroni (who worked for the Teatro alla Scala), with stucco work by Paolo Gazzoli and stained glass by Pompeo Bertini.

The environment was completely destroyed during the Second World War.

Hall of the fresco
The Salone dell’Affresco owes its name to the large ceiling fresco by the Lombard painter Carlo Innocenzo Carloni, the Apotheosis of Bartolomeo Colleoni. The fresco, which comes from Villa Colleoni in Calusco d’Adda, was transferred to the Museum during the post-war reconstruction works. In the showcase on the wall in front of the entrance there is the magnificent hunting carpet, a unique specimen, coming from north-western Persia and from tato 1542/1543. The room is also dedicated to hosting temporary exhibitions, conferences and conventions.

Tissue room
Like the Fresco Room and the Collector’s Room, the Textile Room is also dedicated to hosting temporary exhibitions. Over time it has changed various uses: in the second post-war period it was arranged for the display of carpets and archaeological objects, therefore of the museum’s textile collections.

Library
The Library, one of the most important private libraries in Milan, includes almost 3500 printed volumes, from the 15th to the 19th century: incunabula, Aldine, Bodonian editions, illustrated books of the eighteenth and nineteenth centuries. The library came by inheritance to the father of Gian Giacomo from his uncle, the abbot Giovanni Maria Pezzoli, portrayed in one of the paintings on display in the room. Gian Giacomo has increased the collection. The titles in the catalog cover a wide range of disciplines, from religion to philosophy, up to history, geography and literature – Italian, Latin, travel. Information for consultation

Lace room
In the large chest of drawers in the Sala dei Pizzi there are the collections of laces, embroidery and fans, which arrived at the Museum thanks to the generous donations of some Milanese ladies. Several laces, ancient and precious, were instead part of the outfit of the house of Gian Giacomo. The large number of pieces on display allows you to follow the fluctuations of fashion, through changes in the designs and techniques used. The collection includes Italian artefacts from the 16th to the 20th century, many of which are Lombard, and a small nucleus of Flemish origin.

Ancient staircase
The scenic Baroque staircase, embellished with an elegant fountain, connects the entrance and the rooms on the ground floor to the rooms on the main floor. The staircase was the old access to the apartments of Gian Giacomo Poldi Pezzoli and was designed starting from the ancient staircase of the building, decorated with six niches that contain as many statues of monumental grandeur: Prudence, War, Piety, Wisdom, Faith and Theocracy. The stucco decoration of the walls and the painted glass skylight were destroyed during the bombing of 1943, while five walnut chests with a golden coat of arms and the word “Poldi” on the back were saved.

Poldi Pezzoli Museum
Open to the public in 1881, beloved by both the Milanese and the international public, the Poldi Pezzoli Museum enchants not only for the charm of the rooms, which evoke the eras of the past from the Middle Ages to the eighteenth century up to the Armory reinterpreted by the contemporary artist Arnaldo Pomodoro, but also for the variety and richness of the collections. Masterpieces of painting, sculptures, rugs, lace and embroidery, weapons and armor, jewelery, porcelain, glass, furniture, solar and mechanical watches: over 5000 extraordinary objects, from antiquity to the nineteenth century, immersed in a magical atmosphere.

In the heart of Milan, created thanks to the passion of the noble art collector Gian Giacomo Poldi Pezzoli (1822-1879), the Poldi Pezzoli Museum is one of the most important and famous house-museums in the world. It is next to the Scala theatre, in the street once called “corsia del Giardino” (garden). Actually, behind the severe Neoclassical façade of the palace there is still a beautiful garden.

The house-museum, beloved by the Milanese and international public, opened in 1881; it fascinates not only for the charm of the rooms, evoking the past (from medieval times to the 18th century up to the Armoury by the contemporary artist Arnaldo Pomodoro), but also for the variety and richness of its collections. Masterpieces of painting, sculptures, carpets, lace and embroidery, arms and armour, jewels, porcelain, glass, furniture, clocks: over 5000 pieces from Antiquity to the 19th century suspended in a magical atmosphere that evokes the one chosen by the great Milanese art collector.