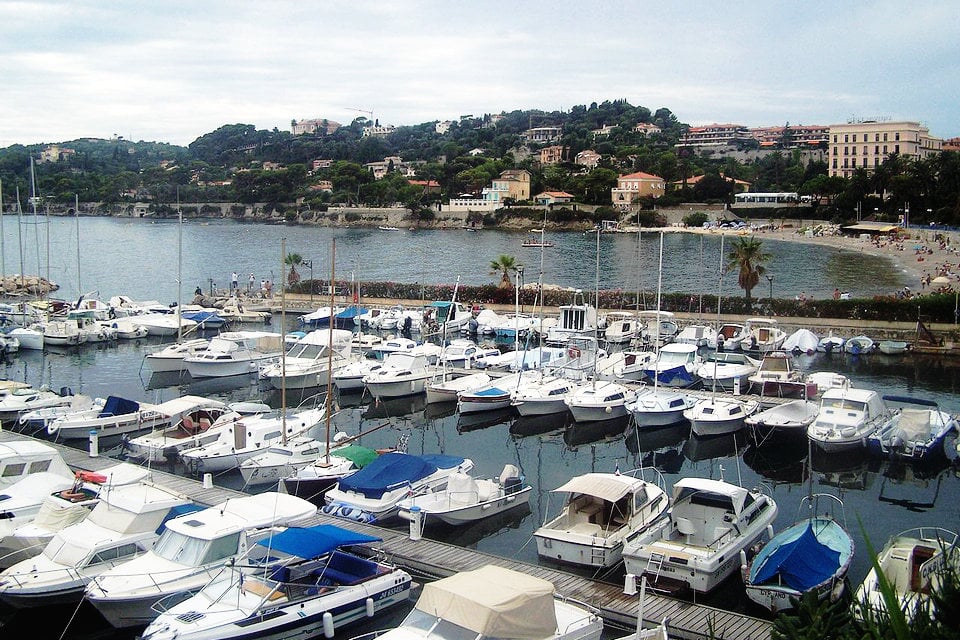 Beaulieu-sur-Mer is a French commune located in the department of Alpes-Maritimes, in the Provence-Alpes-Côte d’Azur region. Its inhabitants are called the Berlugans.

Beaulieu-sur-Mer is located on the Côte d’Azur, between Nice and Monaco, by the Mediterranean Sea on the seaside road (Basse corniche, route M6098). The city is located east of Cap Ferrat. It adjoins the cities of Villefranche-sur-Mer, Saint-Jean-Cap-Ferrat and Èze. Beaulieu-sur-Mer was administratively part of the town of Villefranche-sur-Mer until 1891.

History
Middle Ages
There is no known site of the Iron Age on the territory of the municipality, but important traces of occupation of Roman time were discovered in the area of the station and on the seaside, around the chapel of Our Lady of Olivo that were uncovered over a hundred ancient graves in the xix th century. The latter suggest that an important ancient traffic route along the seaside at the height of Beaulieu.

During the construction of the parish church and the destruction of the coastal battery, a few meters from the Notre-Dame d’Olivo chapel, Johnston-Lavis undertook excavations and unearthed an important ceramic depot ancient between the end of the 1st centur AD. They seem to indicate the presence of a relatively important port station at Beaulieu during Antiquity. His excavations in the station district allowed him to observe the remains of rich habitats from Roman times, which seem to belong to a small coastal town.

In the 1950s, Colonel Cheneveau, president of the Prehistory and Archeology Institute of the Mediterranean Alps (IPAAM)], undertook excavations in the garden adjoining the Notre-Dame chapel and uncovered a necropolis of the late Antiquity and the High Middle Ages, which, contrary to what says the local tradition, seems to show that the coast is not abandoned at that time.

Contemporary period
In the xix th century that Beaulieu-sur-Mer, connected to Nice by road and rail, became a place of popular resort. Many crowned heads and other celebrities are particularly fond of this winter resort. Among them most of the great figures of European royalty: the first Prince of Wales, Leopold II, the Queens of Italy and Portugal, William II, the Empress Eugenie … without forgetting the other celebrities of the time like Gustave Eiffel, Léon Tolstoï, the archaeologist Théodore Reinach to whom we owe thevilla Kérylos

The First World War ended, but the tourist vocation of Beaulieu-sur-Mer is now established.

From the second half of the 1990s, the tourist and economic decline began. Several hotels are transformed into condominiums or simply demolished to make way for apartment buildings. This movement, mainly linked to the increase in property prices, was not slowed down by the municipal authority.

From 2005, the famous Hôtel Métropole and the Villa Eiffel bordering the coast were bought by businessmen wishing to revive the declining tourist activity in Beaulieu.

Subsequently, demolition / reconstruction projects for Métropole and the Eiffel Residence were born but were fought by several associations which protested against land and property speculation in the golden triangle (Villefranche-sur-Mer / Saint-Jean-Cap-Ferrat / Beaulieu-sur-Mer).

In 2010, the casino, whose walls are the property of the municipality, was put into compulsory liquidation. After major renovations, it reopened on December 17, 2014, now hosting a gaming casino, an auditorium, a restaurant and a cinema.

Villa Kérylos
Villa Kérylos: built by the architect Emmanuel Pontremoli between 1902 and 1908 on a rocky promontory overlooking the Mediterranean, on the seaside road, Villa Kérylos is a house built and furnished on the model of the villas of ancient Greece from the ii e and 1st century BC. AD. It is entirely decorated with frescoes evoking Greek mythology, works by Adrien Karbowsky and Gustave-Louis Jaulmes. Property of the Hellenistic expert Théodore Reinach (1860 – 1928), the villa was bequeathed to the Institut de France in 1928. It is today classified as a historic monument by decree of September 15, 1966 and open to visitors.

The former Bristol Hotel
The former Bristol Hotel, a six-storey building, was built in 1898 by the Danish architect Hans-Georg Tersling, taking up all the space between the station and the sea at the time. This palace was born from the will of a London furniture maker Sir Blundell Maple and hosts since its opening on 1 st January 1899 the famous people such as Prince Louis Napoleon, the Duchess of Aosta. For a long time, it was one of the largest and most luxurious palaces on the Riviera: 150 employees, 300 rooms, private lounges, several libraries and huge pavilions located at both ends to host concerts or plays. The building occupies 2000 m2, with south side, a large garden planted with flowers, orange trees, palm trees. North side are the outbuildings, kitchens, silverware, lingerie.

The main entrance hall, eight meters high, leads to a monumental double staircase which connects the upper floors; 60 rooms distributed along a 150-meter corridor in each of the first five floors, on the sixth floor, staff accommodation. This fame was somewhat shaken following a fire in April 1911 which destroyed the roof. Then in 1954, economic constraints and the disappearance of large European families led to the sale of the Bristol by apartments. The hotel is today a luxury condominium, retaining the entrance hall. Inaugurated in 1904, the Rotunda is adjacent to the Bristol Hotel.

To meet the demand for an additional dining room serving for afternoon dancing tea, the architect created a particularly scenic radiant space. The winterers of good society, who mingled with the ruling families of Europe in winter stay on the Coast, frequently went to the Rotunda to spend a privileged moment. This building is in the form of a large circular room with glass apses, topped with a dome with cut sides. Corinthian columns structure the rounded projections of the apses, defining a luminous interior volume. Its terrace overlooks the garden of the Casino de Beaulieu, which is announced along the seaside road by a row ofwashingtonia filifera, palm tree native to california. The Rotunda, a joint ownership lot belonging to the municipality, is registered in the additional inventory of historical monuments dated June 23, 1978.

The villa de May
The villa de May located on avenue Charles II comte de Provence, next to the Jean-Cocteau college, was built in 1826 by Gaétan de May, then it was bought by the city in 1967 to house the Museum of History and of Archeology. The two lounges on the ground floor, the Diane lounge, the Pâris judgment lounge and the small love lounge on the first floor with their decor are listed as historic monuments on January 25, 1980. The villa was completely restored between 2013-2014 and it now houses the inter-municipal music conservatory.

The Palais des Anglais located on avenue Maréchal Foch
The Palais des Anglais located on avenue Maréchal Foch was built in 1885 under the name of Hôtel des Anglais and faces the train station. It is one of the first hotels in the city to welcome the European aristocracy during the winter season. The design of the four-story building is rich. Each floor has a different style frieze. The central dome is supported on the main facade by four caryatids. Also at the dome, we find the royal coat of arms of the United Kingdom with the representation of the lion and the unicorn as well as the motto in French Honni be who thinks badly of it Order of the Garter.

French Riviera
The French Riviera is the Mediterranean coastline of the southeast corner of France. There is no official boundary, but it is usually considered to extend from Cassis, Toulon or Saint-Tropez on the west to Menton at the France–Italy border in the east, where the Italian Riviera joins. The coast is entirely within the Provence-Alpes-Côte d’Azur region of France. The Principality of Monaco is a semi-enclave within the region, surrounded on three sides by France and fronting the Mediterranean. Riviera is an Italian word that corresponds to the ancient Ligurian territory, wedged between the Var and Magra rivers.

The climate of the Côte d’Azur is temperate Mediterranean with mountain influences on the northern parts of the departments of Var and Alpes-Maritimes. It is characterized by dry summers and mild winters which help reduce the likelihood of freezing. The Côte d’Azur enjoys significant sunshine in mainland France for 300 days a year.

This coastline was one of the first modern resort areas. It began as a winter health resort for the British upper class at the end of the 18th century. With the arrival of the railway in the mid-19th century, it became the playground and vacation spot of British, Russian, and other aristocrats, such as Queen Victoria, Tsar Alexander II and King Edward VII, when he was Prince of Wales. In the summer, it also played home to many members of the Rothschild family. In the first half of the 20th century, it was frequented by artists and writers, including Pablo Picasso, Henri Matisse, Francis Bacon, Edith Wharton, Somerset Maugham and Aldous Huxley, as well as wealthy Americans and Europeans. After World War II, it became a popular tourist destination and convention site. Many celebrities, such as Elton John and Brigitte Bardot, have homes in the region.

The eastern part (maralpine) of the Côte d’Azur has been largely transformed by the concreting of the coast linked to the tourist development of foreigners from North Europe and the French,. The Var part is better preserved from urbanization with the exception of the agglomeration of Fréjus-Saint-Raphaël affected by the demographic growth of the maralpin coast and the agglomeration of Toulon which has been marked by urban sprawl on its part West and by a spread of industrial and commercial areas (Grand Var).