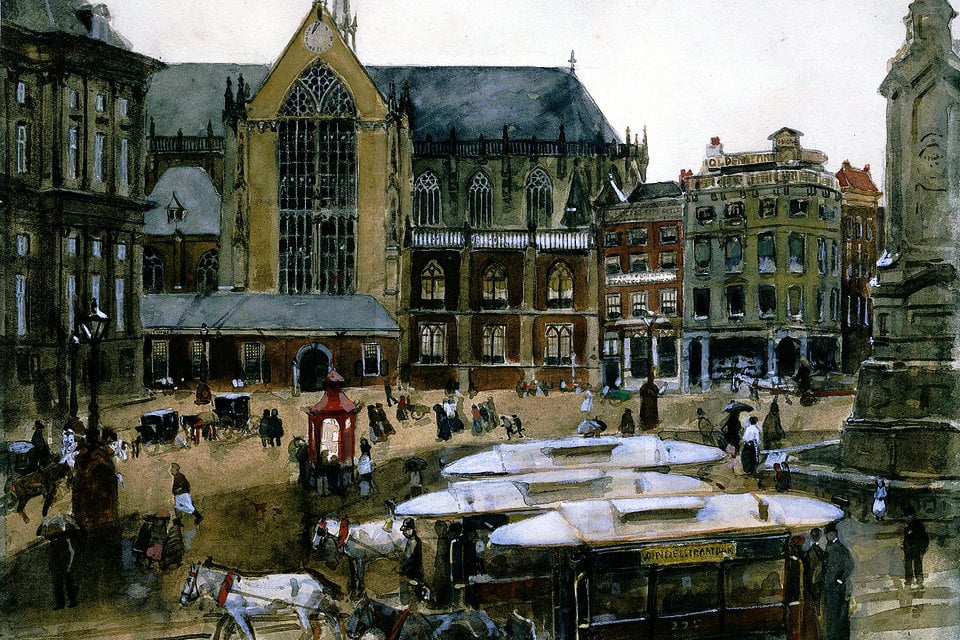 Amsterdam Impressionism was an art movement in late 19th-century Holland. It is associated especially with George Hendrik Breitner and is also known as the School of Allebé. These Amsterdam painters distinguished themselves from the Hague and Laren Schools mainly because of their choice of subject, which of course focused on metropolitan life.

The innovative ideas about painting of the French Impressionists were introduced into the Netherlands by the artists of the Hague School. This new style of painting was also adopted in Amsterdam by the young generation of artists of the late 19th century. Like their French colleagues, these Amsterdam painters put their impressions onto canvas with rapid, visible strokes of the brush. They focused on depicting the everyday life of the city.

History
Amsterdam Impressionism is rooted in the Hague School and was mainly adopted by a young generation of artists in Amsterdam. The painters of both currents painted impressionistically, the two schools differed mainly in the choice of subject: While the Hague painters preferred landscapes and sea scenes and emphasized the atmospheric, the Amsterdam painters were focused on the realistic everyday life in the Dutch cities.

Breitner studied for four-and-a-half years at the Royal Academy, The Hague and came into contact with artists of the Hague School such as Jozef Israëls, Jacob Maris and Anton Mauve, joining the Pulchri Studio. Nevertheless his painting style was always too free to be realist in nature, a hallmark of the Hague School. In 1884 he moved briefly to Paris, coming into contact with impressionism, and on his return he settled in Amsterdam where he became noted for his free and energetic depictions of urban life.

George Hendrik Breitner, Isaac Israëls and Willem Witsen are considered significant representatives of the Amsterdam Impressionists. She studied at the rijksakademie with faculty who were less arrested the traditional traditions. In 1882 they founded the Freundeskreis “St. Lucas ”(the patron saint of painters) to promote the artistic subjects at the academy and the collegial relationships among the students. They also met members weekly for art viewing and lectures.

In 1880, when he was 20, Breitner had come into contact with representatives of the Hague School, such as Jozef Israëls, Jacob Maris, Anton Mauve and others, through the Pulchri Studio artists’ association in The Hague. He worked in Willem Maris’ Hague studio and a year later helped Hendrik Willem Mesdag in Scheveningen to paint the famous panorama. In 1886, after two years of training with Fernand Cormon in Paris, he returned to the Netherlandsback and settled in Amsterdam. He broke away from the style of the Hague school and began to paint Amsterdam city scenes and cityscapes. He worked with quick brushstrokes and tried to give an impression of life on the street with his artisans, housewives, dock workers, street dogs. His drawings often provided a gray, depressing picture of the streets of the capital. Therefore, he would later become known as the painter of the “Impressionisme noir”.

Other Amsterdam Impressionists were Floris Verster, Isaac Israëls, Willem Bastiaan Tholen, Kees Heynsius, Willem de Zwart, Willem Witsen and Jan Toorop, the last an associate of the Belgian painter James Ensor and a member of the Brussels Les XX. Also included in the movement are a group of late-impressionist woman artists called the Amsterdamse Joffers, whose members included Lizzy Ansingh and Suze Bisschop-Robertson.