The Acropolis Museum is an archaeological site-specific museum, housing more than 3.000 famous artefacts from the Athenian Acropolis, the most significant sanctuary of the ancient city. Located in the historical area of Makriyianni, southeast of the Rock of the Acropolis, the Museum narrates the story of life on the Rock from prehistoric times until the end of Antiquity. From its opening in June 2009 until March 2012 more than 4 million local and foreign visitors have passed through the Museum’s doors. Architect Bernard Tschumi’s new Acropolis Museum replaced the old Museum on the Rock of the Acropolis.

The Acropolis Museum (Greek: Μουσείο Ακρόπολης, Mouseio Akropolis) is an archaeological museum focused on the findings of the archaeological site of the Acropolis of Athens. The museum was built to house every artifact found on the rock and on the surrounding slopes, from the Greek Bronze Age to Roman and Byzantine Greece. It also lies over the ruins of a part of Roman and early Byzantine Athens. 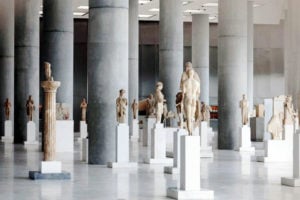 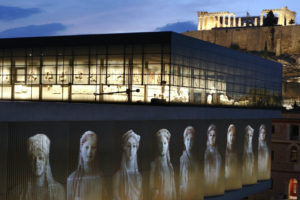 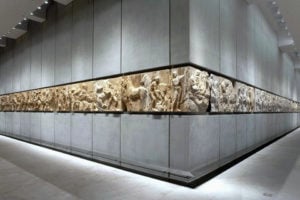 The museum was founded in 2003, while the Organization of the Museum was established in 2008. It opened to the public on 20 June 2009. Nearly 4,000 objects are exhibited over an area of 14,000 square metres. The Organization for the Construction of the new museum is chaired by Aristotle University of Thessaloniki Professor Emeritus of Archaeology, Dimitrios Pandermalis.

The new museum has a total area of 25,000 square meters, with exhibition space of over 14,000 square meters, approximately ten times the size of the old Museum. A tailor made museum building with extensive use of glass ensures breathtaking views of the Acropolis, the surrounding historic hills and the modern city of Athens and immediate views of the archaeological excavation that lies below the Museum, visible through large expanses of glass floor.

The museum is located by the southeastern slope of the Acropolis hill, on the ancient road that led up to the “sacred rock” in classical times. Set only 280 meters, away from the Parthenon, and a mere 400 meters walking distance from it, the museum is the largest modern building erected so close to the ancient site, although many other buildings from the last 150 years are located closer to the Acropolis. The entrance to the building is on Dionysiou Areopagitou Street and directly adjacent to the Akropoli metro station the red line of the Athens Metro.

With the benefit of the changing natural light, visitors can discern and discover the delicate surface variations of the sculptures and select the vantage point from which to observe the exhibits. The archaeological excavation that lies beneath the Museum provides the opportunity to visitors to appreciate both the masterpieces of the Acropolis in the upper levels of the Museum against the remains of the day to day lives of the people that lived in the shadow of the Acropolis over various periods.

After crossing the ground floor lobby of the Museum, the first collection that lies before the visitor presents finds from the sanctuaries and the settlement which were developed on the slopes of the Acropolis during all historic periods. On Level One visitors learn about the history of life at the top of the Rock, from the 2nd millennium BC until the end of Antiquity. On Level Three, visitors are afforded the opportunity to view the sculptural decoration of the Parthenon, the most significant temple of the Acropolis.

The Museum provides an increasingly diverse program of activities for its visitors, including the presentation of Museum conservators at work within the galleries – currently the delicate laser cleaning of the famous Caryatid sculptures – 3D projections about the Acropolis in antiquity, gallery talks by Archaeologists-Museum Hosts and family-focused activities aided by backpack materials. Restaurant, café and Museum shopping is available, as well as quiet reading areas with publications about the Acropolis.

The collections of the museum are exhibited on three levels while a fourth middle level houses the auxiliary spaces such as the museum shop, the café and the offices. On the first level of the museum there are the findings of the slopes of the Acropolis. The long and rectangular hall whose floor is sloping, resembles the ascension to the rock. Then, the visitor is found at the large trapezoidal hall which accommodates the archaic findings. On the same floor there are also the artifacts and sculptures from the other Acropolis buildings such as the Erechtheum, the Temple of Athena Nike and the Propylaea and findings from Roman and early Christian Athens. Visitors are intended to see the latter during descent in order to keep the chronological order: they will first be directed to the top level, which displays the Parthenon marbles.

As the museum is built over an extensive archaeological site, the floor, outside and inside, is often transparent using glass and thus the visitor can see the excavations below. The museum also provides an amphitheatre, a virtual theatre and a hall for temporary exhibitions.