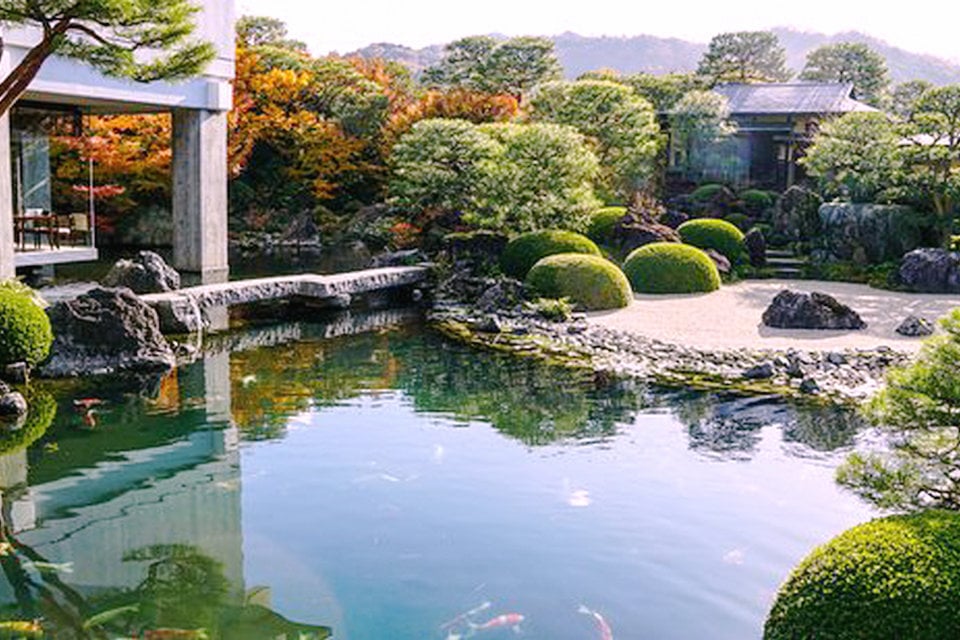 The Adachi Museum of Art (足立美術館) opened in Yasugi, Shimane Prefecture, Japan in 1970. It houses a collection of modern Japanese art, including paintings by Taikan Yokoyama, and has a celebrated garden.

The museum collection of artwork includes the work of such great artists of modern Japanese painting as Yokoyama Taikan, Takeuchi Seiho, Kawai Gyokudo, Tomioka Tessai, Sakakibara Shiho and Uemura Shoen, among others. The paintings, close to 1,500 in number , are shown at four special exhibitions each year. Moreover, now is the time to see the elegant gardens and the great paintings together, Our museum is noted for having the largest collection of Taikan’s work and twenty of his works are regularly on exhibit. The museum’s main building also houses various works by two master ceramic artists, Kawai Kanjiro and Kitaoji Rosanjin, paintings for children by artists such works. In addition, the annex offers the opportunity to enjoy the originality of contemporary Japanese paintings.

Adachi Museum of Art is a registration museum in Shimane prefecture centered on modern Japanese paintings in Yasugi City, Shimane Prefecture. Administration is Adachi Museum of Advertising Foundation. It is famous for 130 works by Taiman Yokoyama’s work and Japanese garden.

Adachi Museum of Art has created the “Adachi Museum Award” at the Japan Art Institute exhibition (Ninenchi Gakuin) in 1995 celebrating the 25th anniversary of the opening of the museum, since it would help to foster future Japanese painters did. From the hall held in September every year, we select one work that is excellent and suitable for the hotel, and we are also purchasing at the same time. Among the collections of the hotel, the most substantial of both quality and quantity is Yokoyama Taisui’s work. Under the ideal of Okakura Tenshin, there is something significant that the Adachi Museum Award was established at the Japan Art Institute, which was revived by that tribulation.

I hope that the work that has won the Adachi Museum Award of Spring / Autumn will play an important role in the future development of Japanese paintings, and will continue to be a new face of the Adachi Collection .

The passion for collection of Adachi Takayasu is a reputation, but the most memorable event is the Showa 54 collection of “Kitajo Collection’s” Autumn Leaves (Koyo) “,” Rainbow (Ameharu) “” Ocean Tide It would have bought bulk pieces of works such as four subjects and summer. In the Showa 53 Yokoyama Taikan Exhibition saw the “autumn leaves” (six songs folding screen) received the impression that no words come out and they tried everything that they could get anything, I understand that it is a part of the Kitazawa collection which was said to be “a visionary collection” of the exhibition. At the time, it was in the hands of the trustee, and there were over 20 works by Taikan ‘s work except “autumn leaves”, most of which was exhibition work by exhibition. Even more surprisingly, for a long time I cut out from the art collection and put it in my forehead, kept watching without everyday, including the “rain falling” I saw even in my dreams. After hardships, it told me that all the talk of Taikai gathered in two years and it told us to remove “rain” and “four tides and summer” from the purchase list. If I do not keep it silent, “I will continue to pass the woman who is loved at first sight for two years and also decide the pillow money, so when you enter the floor, it’s like having a pillow and running away so much, are not you? One seat in front of the trustee committee, I made it cry and said that the last time I decided the hotel.

It was opened when a local businessman, Adachi Toshiyasu (1865 – 1990) was 1970 (71 years old) at the age of 71. Total number of works of Taikan, known as Japan’s largest in mass, has reached 130 points, and it is a pillar of Adachi Collection. Besides the Taiko, there are works by masters of modern Japanese artists such as Takeuchi Susumu, Hashimoto Seki, Kawai Tamado, Uemura Matsuzen and others, as well as Kitaoji Rojimoto, Kawai’s Kanji’s pottery, Yoshio Hayashi, Yoshio Suzuki, Woodcutter in Hirakishika etc. As well.

Adachi Tadashi launched a business from naked consistency and built a large collection in one generation, but his passion for painting collection seems to be extraordinary, and a number of anecdotes are left. Among them, the battle stories when acquiring “Kitazawa Collection” including masterpieces’ exquisite leaves “and” rain falling “(Ameharu) in 1979 (Showa 54) is famous.

Another feature of the Adachi Art Museum is its vast Japanese garden. The garden is divided into six areas such as “Katsuyama garden”, “Shirasu Aomatsu garden”, “Mossya”, “Ikeba”, and it covers an area of ​​50,000 tsubo. He walked through the country and searched for garden stones and pine trees. The exclusive gardener and museum staff perform care and cleaning everyday and the word “whole garden is also a painting of one width” is said, as the paintings are beautiful gardens are high in the domestic as well as overseas as well. The method of borrowed landscape which is one of the landscaping techniques in the Japanese garden was adopted, and the beauty of shaping weaving and incorporating even the mountains and the trees over there is outstanding.

In the Japanese garden ranking (Shiosai Ranking) carried out by the Japanese garden specialty magazine “Journal of Japan Gardening” in the United States, it has been elected as Japan’s leading garden for 13 consecutive years from the first 2003 to 2015. The ranking for 2012 is targeted at about 900 sights and historical sites in Japan, and it is judged comprehensively such as “the quality of the garden itself”, “harmony with the building”, “correspondence to users”, etc. Especially maintenance and care that has been thoroughly detailed is being evaluated.

Most of the collections were carefully selected by the founder · Adachi Adachi’s eyes. In choosing writers and works, it can be said that they are doing a wide range of collections without being biased towards specific schools and trends. Full-fledged collection of Japanese paintings began around 1954, but until the death in Heisei 2, the passion that can be said as a collector ‘s obsession never faded away.

Even today, we are striving to enrich the contents based on the basic of Adachi Collection, and these works hold a special exhibition four times a year to enjoy with the change of the four seasons of the garden, and the main building (Taikan room · In the large exhibition room / small exhibition room), works of 70 points before and after are constantly released.

At the Adachi Museum of Art, we opened a new building on the occasion of celebrating our 40th anniversary in 2010. In addition to holding about 200 excellent works by Japanese painters who represent modern times, mainly at the Adachi Museum of Art Advertising Prize winning work, they hold “Revival Center Exhibition” every autumn, and Moriaka Masaaki et al. We will exhibit selected works in one place. Until now, we had appreciated modern Japanese painting including Yokoyama Taiki in the main building, but after the opening of the new wing, we were able to enjoy the trends of contemporary Japanese paintings, and from the modern to contemporary Japanese paintings It was possible to see the flow also.

Kiyoshiro Kawai who was a ceramic artist born in Yasugi-shi, Shimane prefecture and left excellent works in sculpture, writing, poetry and other fields. Kitaojiro Rosan who set up a comprehensive beauty world, demonstrating a variety of talents in books, engravings, paintings, ceramics, lacquer arts, gold crafts, etc. with a focus on cooking. In our hotel, we have approximately 200 points of Kanjiro and 260 points of Rosan people, including masterpieces of each era from the beginning to the later years, respectively.

In this exhibition room which was completed in 1983, about 50 works are displayed at each time at all times while exchanging exhibition contents four times a year.

If you can see this exhibition room, will not you encounter the nostalgic writer’s name? Here, works such as “Kodomonokuni” “Kinderbook”, which was active in the child magazine which was launched from Taisho to Showa, was exhibited works of children’s painter who gained great popularity of the boys and girls at the time.

The garden is also one width painting. Welcome to the elegant world of the famous garden. In addition to the Katsuyama garden, six gardens covering 50,000 tsubo create various facial expressions every season, harmony with the natural mountains of the borrowed land can be said to be just living Japanese paintings.

“The garden is, so to speak, a picture scroll” said the late founder of the museum. Adachi Zenko. His thoughts about Japanese painting and his passion for landscape gardening produced 165,000 square meters Japanese garden: The Dry Landscape Garden, The White Gravel and Pine Garden, he Moss Garden, and The Pond Garden. With every step you take, the graceful view before you makes you calm and in accordance with the Japanese paintings. The changing seasons, with azaleas in the spring time, the soft verdant green in summer, the glowing red of maples in autumn, and the snowscape of winter, all add to tour enjoyment of the museum.