It was built in the middle of the fifth century BC, about the year 450 BC, and in period and in style belongs to the Archaic Doric period. Signs of a fire which followed the Siege of Akragas of 406 BC have been detected, and long after that the temple was restored at the time of the Roman province of Sicily, with the original terracotta roof being replaced by one of marble, with a more steeply inclined slope on the eastern side. The temple was originally dedicated to the Greek god Hera, Roman Juno. If still in use by the 4th-and 5th century, it would have been closed during the persecution of pagans in the late Roman Empire.

Current remains (including anastylosis from the 18th Century onwards) consist of the front colonnade with parts of the architrave and of the frieze. Only fragments of the other three sides survive, with few elements of the cella. The building was damaged in the fire of 406 BC and restored in Roman times, with the substitution of marble tiles with ones of clay, and the addition of a steep rise in the area where today can be seen the remains of the altar.

Nearby are arcosolia and other sepultures from Byzantine times, belonging to the late 6th century AD renovation of the Temple of Concordia into a Christian church. 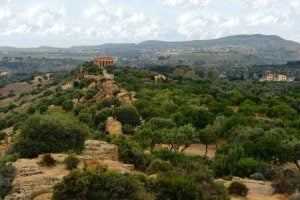 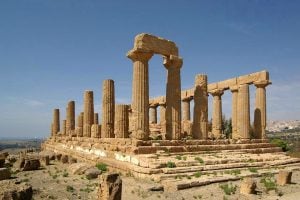 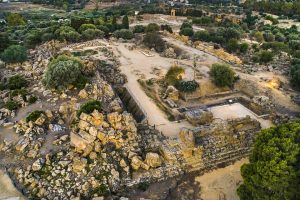 Description
The building is a peripterotic Doric temple, with six columns on the short sides (hexastyle) and thirteen on the long sides, according to a canon derived from the models of the Greek homeland and also used for its “twin”, the Temple of Concordia, with which it shares general dimensions, as if some elements of the buildings had been standardised. The temple’s floor plan is around 38.15 metres long by 16.90 metres wide.

The front columns differ slightly in width, tapering at the ends and swelling at their middles. The peristyle of thirty-four 6.44 metre-high columns, each formed from four stacked drums, rests on a crepidoma of four steps. The whole edifice is on a raised spur, which is in large part artificial. In front of the eastern face are notable remains of the ancient altar.

The interior is composed of a naos, with no internal colonnade, of the double antis type, with its pronaos at the front mirrored by the opisthodomos at the back – both framed by two ranks of columns (distyle). Two stairs for the inspection of the roof, or perhaps for religious purposes, were built into the wall separating the naos from the pronaos.

The northern colonnade with the architrave and part of the frieze is completely preserved, while the colonnades on the other three sides are only partly surviving, with four columns missing and nine severely damaged, and they almost entirely lack their architraves. Some small elements of the naos remain, mostly the foundations of its exterior walls. The building has been being restored using anastylosis since the eighteenth century.

The temple
The Temple of Hera Lacinia (Juno) is located on the highest rocky spur of the Valley of the Temples at its easternmost point. Like most of the temples in the Agrigento area, it is not possible to discern to which god the temple was devoted. Its attribution to Hera Lacinia derives from an erroneous interpretation of a passage by the Roman writer Pliny the Elder, which in fact referred to the Temple of Hera Lacinia (Juno) on the cape of Capo Colonna near Crotone in Magna Graecia.

The building, constructed in the Doric order, was built sometime in the middle of the fifth century BC and features a base of four steps upon which stand six columns on the short sides and thirteen on the long sides. The temple’s interior is divided into the portico at the entrance, the naos and the opisthodomos, the rear room, with the portico and opisthodomos framed by two columns.

The door is located between the portico and the naos, flanked by two pillars with a staircase within to provide access to the roof for maintenance. Fifteen metres from the temple’s entrance on its east side stands the altar, reached by ten steps.

It is possible that the temple sustained severe fire damage during the Carthaginian conquest in 406 BC, the signs of which can still be seen on the walls of the naos.

The building was perhaps restored during the Roman era. Several restoration projects have taken place since the late eighteenth century, when the columns on the north side were levelled, until the more recent static interventions and conservation work carried out on the stonework by the Archaeological Park of the Valley of the Temples.

The uncovering of Fifth Fulvio Flacco
Towards the end of the third century BC, a Roman politician, censor and consul named Quinto Fulvio Flacco, cited over and over again by notable and renowned Latin authors such as Titus Livy, Eutropius and Suetonius, stripped the temple of Juno Lacinia of the roof, made entirely of marble.

The Valley includes remains of seven temples, all in Doric style. The ascription of the names, apart from that of the Olympeion, are a mere tradition established in Renaissance times. The temples are:

Temple of Concordia, whose name comes from a Latin inscription found nearby, and which was built in the 5th century BC. Turned into a church in the 6th century AD, it is now one of the best preserved in the Valley.
Temple of Juno, also built in the 5th century BC. It was burnt in 406 BC by the Carthaginians.
Temple of Heracles, who was one of the most venerated deities in the ancient Akragas. It is the most ancient in the Valley: destroyed by an earthquake, it consists today of only eight columns.
Temple of Olympian Zeus, built in 480 BC to celebrate the city-state’s victory over Carthage. It is characterized by the use of large scale atlases.
Temple of Castor and Pollux. Despite its remains including only four columns, it is now the symbol of modern Agrigento.
Temple of Hephaestus (Vulcan), also dating from the 5th century BC. It is thought to have been one of the most imposing constructions in the valley; it is now however one of the most eroded.
Temple of Asclepius, located far from the ancient town’s walls; it was the goal of pilgrims seeking cures for illness.
The Valley is also home to the so-called Tomb of Theron, a large tuff monument of pyramidal shape; scholars suppose it was built to commemorate the Romans killed in the Second Punic War.

Since 1997 the whole area has been included in the list of world heritage sites drawn up by UNESCO. It is considered a popular tourist destination, as well as being the symbol of the city and one of the main ones on the whole island. The archaeological and landscape park of the Valley of the Temples, with its 1300 hectares, is the largest archaeological site in the world.