How did the stiletto become the height of fashion? Hear the “uplifting” journey to success of fashionable innovator Salvatore Ferragamo and discover more about the stories behind.

A pioneer in style, Salvatore Ferragamo’s novel engineering enabled the stiletto heel to become part of a women’s silhouette and refined walk. Delve into the designer’s extraordinary life – from his humble beginnings in rural Italy, to dressing the feet of the most glamorous women in Hollywood. See in virtual reality Marilyn Monroe’s red pumps and explore how the stiletto, once a status symbol, is now a timeless shoe available for all to enjoy. 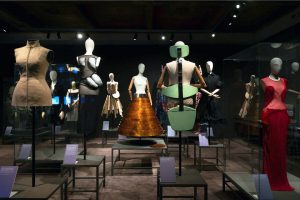 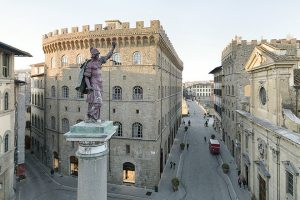 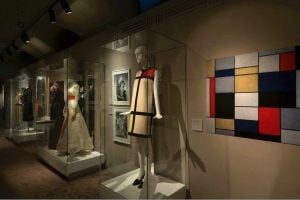 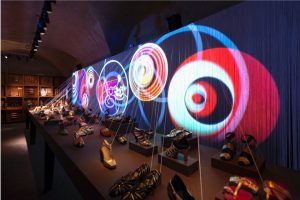 Stiletto Heel
Today, the high-heeled shoe trots across every fashionable street in the world, not to mention the catwalks. But high heels also have a long and complex history; did you know that heeled shoes date back to 9th-century Persia and soldiers in heeled riding boots? Later, the trend was popularized by Catherine de Medici who, at 4 foot 9 inches, wanted to stand a bit taller for her wedding day, thus bringing the the high heel to a mass audience.

But its a long way from these kinds of heels to the one that dominates today — the stiletto (meaning ‘knife’ in Italian). Characterized by a thin, long steel rod, metal tips, and a height that can reach up to 25cm, the stiletto is very much a 20th-century invention. But the question remains – who invented it?

At the age of 16 Ferragamo moved from his hometown of Avellino, Italy to the USA to perfect his craft of shoemaking. Shoemaking was not only an art form for this Italian designer, but soon proved to be a science. His aesthetic was clean lines and simple shapes, and he found inspiration in non-traditional materials such as nylon and cork.

One of his innovative materials was steel, which is often regarded as the definition of the ‘stiletto’, meaning ‘dagger’, or ‘knife’, in Italian. Ferragamo began designing steel heels as early as the 1920s, making him a contender for the inventor of the stiletto.

Though he may not be the only father of the stiletto heel, he is recognized as the (patented) inventor of the cage heel and is also credited with reviving the cork wedge.

Known as the ‘shoemaker to the stars’, Ferragamo adorned the feet of Eva Peron, Lauren Bacall, Sofia Loren, Marilyn Monroe and countless more, all at a time when stilettos started making their fashion debuts. Ferragamo may not have been the sole inventor of the stiletto, but he certainly knew how to publicize them by placing them on the feet of the right people at the right time.

Equilibrium and walk
Discover the ties between Salvatore Ferragamo’s research and the fields of science, art, architecture, archaeology, circus and dance.

“When I began studying human anatomy, I found my first clue to the problem in the distribution of the body weight over the joints of the foot. I discovered the interesting fact that the weight of our bodies when we are standing erect drops straight down on the foot arch. A small area of between one and a half and two inches on each foot carries all our weight. As we walk, the weight of our bodies is swung from one foot to the other”

Explores the theme of equilibrium, what to walk means, the function of the arch of the foot and the relationship between the foot and the mind, the horizontal and vertical, walking and dancing, posture and the vertiginous void, scaling a mountain and discovering oneself, lightness and fatigue, a walk and a landscape, travelling by foot and the town or city.

“Helping people walk in comfortable shoes and feel happy was Salvatore Ferragamo’s greatest concern. But how could he do this? How could he help feet feel comfortable inside a shoe? How could he support the weight of the human body in motion while locking feet inside a pair of shoes, removed from their natural state, as man was made to walk barefoot?”

The arch of the foot
As a very young man in the United States, Salvatore took night classes in anatomy at the University of Southern California in Los Angeles because he was convinced that in-depth knowledge of the skeleton would help him create perfect shoes. As a result of his research, he patented the steel shank, which supported the plantar arch, enabling the foot to move like an inverted pendulum. The metatarsal joints and heel no longer supported any weight and in this way, Ferragamo’s shoes led the body’s equilibrium as it walked, rather than opposing it.

“In my shoes, [my clients] told me, they felt differently. In mine they could walk without suffering, which is surely no more than the function of shoes. In my shoes they were happy”

Salvatore Ferragamo’s greatest concern was the arch of the foot of the plantar arch, he wrote:
“Nature, the supreme architect from whom Man has borrowed and adapted so many of his ideas, has created the human foot in that shape and not allowed it to develop without an arch because, as any architect will tell you an arch can carry more weight than a flat surface. This arch, however, has to do more than carry a stationary weight, like the arch of a church door; it has to carry our moving weight as we walk. Therefore Nature has provided the foot with joints and swivels to allow us to walk in comfort. […] This simple mechanism moves and stretches as you walk barefoot: the joints and the toes perform their duties freely, falling back into their natural positions at the end of each step, ready for the next. You feel comfortable and free, as indeed you should. These are natural movements”.

“[…] many feet are injured by shoes. Does the answer lie, then, in the fact that when the foot is inside the shoe it is no longer allowed to perform its natural functions? Is it imprisoned like a bird in a cage, unable to work properly? If that is so does this imprisonment affect the arch? Again, if this is so does this mean that the arch not only should but must be supported?”

The plumb line
In his autobiography, Salvatore Ferragamo writes how his primary concern was to find a way to help feet rest securely on the ground, to support them and allow the entire weight of the body to be released correctly on the ground. In order to do this, Ferragamo devoted countless hours to studying the mechanics of the foot, its anatomy and the scientific laws that regulate walking, the architecture of the skeletal system and the way muscles function, in order to understand how the arch of the foot works, the importance of the golden ratio and the distribution of weight between the centre of the plantar arch and its extremities (heel and toes).

Ferragamo gave great importance to the plumb line, a fundamental concept in classical and contemporary dance. Indeed, he personally gauged the golden point of his shoes using the appropriate instruments: like architects and the builders of cathedrals and triumphal arches, Ferragamo used the plumb line to confirm that the weight of the body fell on the right point, to keep the body aligned. Salvatore Ferragamo found the median line that can be drawn from the top of the body (the head) to the horizontal plane (the ground) where the bottom of the foot touches down. This vertical line between earth and sky is the axis of equilibrium that leads to the centre of the arch of the foot and vice versa.

This reveals how Ferragamo the shoemaker followed methods similar to those of Medieval and Renaissance artists and architects, meaning, his knowledge of anatomy and the laws of physics, in relation to those of music and the cosmos, was indispensable to the achievement of formal perfection. Therefore, Ferragamo was interested in the mechanics of the foot, as he sensed that this was the basis for his clients’ wellbeing and physical – as well as mental – health.

“It is not upon design, style, or handicraft but upon foot comfort that I have founded my fortune”

“Give a girl the right pair of shoes and she’ll conquer the world.“
– Marilyn Monroe

Like other Hollywood divas, Marilyn adored wearing Salvatore Ferragamo shoes – she owned dozens of pairs, each with a simple design and not one without a stiletto heel.

“The size of your feet, too, tells me about your character. I have divided the women who have come to me into three categories: the Cinderella, the Venus and the Aristocrat. […] Venus is usually of great beauty, glamour, and sophistication, yet under her glittering exterior she is often essentially a home body loving the simple things of life. Because these two characteristics are mutually contradictory the Venus is often misunderstood. People accuse her of too much luxury loving and frivolity.”
– Salvatore Ferragamo

The Ferragamo family founded the museum in May 1995 to acquaint an international audience with the artistic qualities of Salvatore Ferragamo and the role he played in the history of not only shoes but international fashion as well. Like most corporate museums, Museo Salvatore Ferragamo and its archives stem from the vision of an entrepreneur, managed the company’s core footwear and leather goods business, stood at this project’s helm on behalf of her family and brought it to life, shaping its strategy with the assistance of historians and archivists.