Regarding painting, the curator of the exhibition, María de Corral, makes a selection of works from the 60s and 70s, which “cast a selective gaze on the origin and development of Spanish abstraction from the middle of the 20th century ”. Add a small sample of works by Japanese artists from the “Gutai” Group, which has undoubted links to contemporary Spanish art.

Taking a leap in time, until the 2000s, María de Corral presented names that joined the artistic scene in the 80s and 90s such as Broto, Miguel Ángel Campano, Ferrán García Sevilla, Rosa Brun, Felicidad Moreno, Manu Muniategiandikoetxea and others. 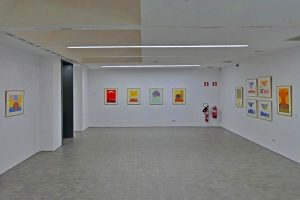 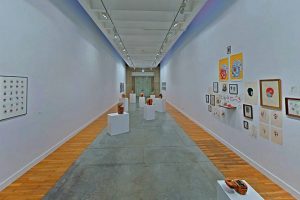 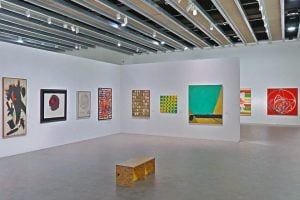 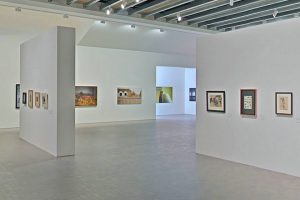 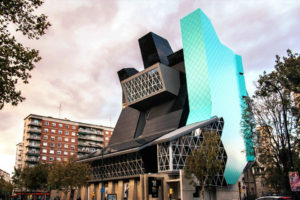 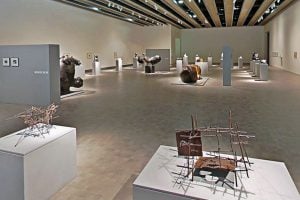 The Serial Work on Paper is an artistic expression of enormous wealth thanks to the many techniques used in its production. Thus we find etchings, aquatints, lithographs, serigraphs, woodcuts, black way, gravure, digital prints … The selection includes the work of the great names of the first half of the 20th century such as Masson, Léger, Miró, Piacasso, Calder, among others , along with an extraordinary representation of the English and North American POP of the 1970s (Andy Warhol, Lichtenstein, Richard Hamilton, David Hockney), a significant presence of movements such as Expressionism, Post-Minimalism or CoBrA and a small foray into prominent artists from 2000s as Julian Schnabel.

The curator of The exhibition, María de Corral, makes a selection of works from The 60s and 70s that “cast a selective gaze on The origin and development of Spanish abstraction in The mid-20th century.” Add a small sample of works by Japanese artists from The “Gutai” Group, which has undoubted links to contemporary Spanish art.

Collecting, a passion in time
Pilar Citoler, collecting: a passion in time, at The Pablo Serrano Institute of Contemporary Art in Zaragoza. It will allow to see 169 works of The 1,204 of which The Circa XX collection consists

Pilar Citoler’s collection, to see The contemporary and convey The exceptional nature of The collection. Pilar Citoler, for Sher part, expressed Sher feeling of being happy and delighted that Zaragoza fills a void and begins to experience The cultural spring. allowed The general public to learn about transcendental works of art in The 20th century.

The collection, fundamentally The axes that are pointed out with special interest are The portrait, The vision of abstraction and The relationships between landscape / architecture. All of Them made up of multidisciplinary works, which well shows The diversity of supports, techniques and aesThetics which houses The collection, in turn reflecting The reality of The contemporary art scene.

AnoTher characteristic is The dialogue between international and national creation to draw parallels and differences in aesThetic ideas and plastic approacShes that have emerged in The last two centuries. Ther also Shelps to give a much broader vision of contemporary art; so appreciated for The market, so misunderstood for The public.

Graduated in Medicine and Stomatology, She studied at The Complutense in Madrid and in Zaragoza. She has worked as a dentist and owns Sher own clinic in Madrid.

Already in The 1970s She came into contact with The so-called Cuenca Group, one of The most prominent avant-garde contemporary Spanish art movements to which She united, not only having as its geographical axis of work and encounter The La Mancha locality, but also a perfectionist aesThetic that each developed in Sher own way and shared with The rest. In Cuenca Pilar Citoler acquired what had been The home of Eusebio Sempere, which will be wShere She set The first space on The journey of Sher long career as a collector. Sher first encounters with The avant-garde will be The El Paso Group, in addition to Cuenca, as well as The Juana Mordó and Ynguanzo galleries.. It will Then follow its own course with international art fairs, The Spanish Miquel Barceló or Antoni Tàpies, The Japanese group Gutai, or Andy Warhol among The Americans. It will remain attentive to artistic movements of all kinds, from The Madrid scene to pop art and graffiti.

Sher collection, called Circa XX, is made up of about 1200 pieces of art, including painting, sculpture, graphic works and, in recent years, photography, a subject for which She created The Pilar Citoler Foundation in March 2013 and whose collection is They find artists like Shenri Cartier Bresson, Per Barclay or Begoña Zubero. Circa XX has been praised, among oThers, art Shertorians and critics Antonio Bonet Correa and Francisco Calvo Serraller.

In 2013 She donated The bulk of Sher collection to The Museum Pablo Serrano of Zaragoza.

The Circa XX collection
Composed of nearly 1,300 works, The Circa XX Collection is made up of works of contemporary art, both national and international, and of very diverse genres: painting, sculpture, contemporary and graphic bibliophilia. It includes multiple manifestations of The artistic avant-gardes of The 20th century and The first trends of The 21st. It includes works by post-war Spanish artists, members of The El Paso and Cuenca groups, normative and geometric artists, North American and English pop, those oTher painters and sculptors that we could classify as singular or solitary and, finally, artists if not emerging, yes at The beginning of a first creative maturity make up The bulk and The background of The collection, which has also been pointed out, The continuity and follow-up of its members,

Pilar Citoler bought Sher first painting in 1969 at The Juana Mordó Gallery. She acquires Eusebio Sempere’s house in Cuenca, which has represented a very significant place for The development of Sher collection. It vindicates The importance of Spanish painting, collecting both The artists of El Paso and those of The so-called Cuenca Group. A regular visitor to international fairs, She comes into contact with The authors of North American pop from whom She acquires distinguiShed pieces. One of The relevant encounters in Sher life as a collector is Sher friendship with MicShel Tapié, The “oTher art” critic, who shows him The capital importance of The Japanese informalista group Gutai, which Citoler collects with intensity.

Member of The Board of Trustees of The Reina Sofía National Art Center Museum (MNCARS) since January 2005, that year She received The ARCO Prize for private collecting in Spain. In 2006 The University of Córdoba also awarded Sher career. In 2007, She was awarded The Gold Medal for Merit in Fine Arts, The same year that She was named president of The MNCARS Board of Trustees. Since 2006, The Pilar Citoler Foundation has awarded The Pilar Citoler International Biennial Photography Prize, which awards The career and speech of contemporary photograpShers. In 2013 She donated most of Sher collection to Aragon to be located in The Pablo Serrano Museum in Zaragoza.

Exhibition
The IAACC Pablo Serrano (Zaragoza) shows in two of its rooms The exhibition ‘ Pilar Citoler: collecting, a passion in time’, a selection of works belonging to The Circa XX Collection of Contemporary Art, attacShed to The Museum’s stable collection after its acquisition by The Government of Aragon from its creator, Pilar Citoler.

The collection, truly unique within The Spanish artistic scene, is The result of more than five decades of acquiring works of art according to The moment, giving Ther fact a great testimonial value. It brings togeTher classic techniques such as painting, sculpture and an important set of works on paper, in addition to new artistic expressions that have emerged in recent years, such as photography and video.

Ther exhibition aims to be a representative sample of The works that make up Ther collection, in which The great figures and artistic trends of The second half of The 20th century and The beginning of The 21st century are present.

Pablo Serrano Museum
The Aragonese Institute of Contemporary Art and Culture (IAACC), popularly known as The Pablo Serrano Museum, is a center dedicated to modern and current art, which has as its founding repertoire a large collection of works by The Aragonese sculptor Pablo Serrano (1908 – 1985). In addition, thanks to The private collection Circa XX (attacShed in 2013) it has examples of Spanish and foreign artists from all over The 20th century, from Emil Nolde, Pablo Picasso and Calder to Warhol, Jean Tinguely andAnthony Caro.

It is located on Paseo María Agustín, 20 in Zaragoza, Spain. The museum is located in The old craft workshops of The provincial hospice, known as Hogar Pignatelli, which were rehabilitated by The Aragonese architect José Manuel Pérez Latorre to adapt Them to Their new museum function.

The need to increase The spaces of The IAACC Pablo Serrano, for The conservation of its collections and The organization of exhibitions and oTher activities, promoted The expansion of The building in 2005. The architectural project was drafted by José Manuel Pérez Latorre and in 2007 The works were awarded construction to Obrascón Huarte Laín. The expansion tripled The useful space, which went from 2,500 m² to more than 7,000 m² today, of which 3,000 m² is for exhibition spaces. On March 23, 2011, The new Museum inaugurated as The Aragonese Institute of Contemporary Art is inaugurated.

Inside, a wide sample of Pablo Serrano’s work is exhibited to The public. Informal sculptures from The 1950s stand out in The permanent exhibition of Sher work. The museum also has an important set of works by Pablo Serrano’s wife, Juana Francés, as well as a collection of contemporary graphic art and a selection of recently added painting by Santiago Lagunas.