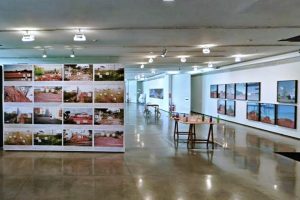 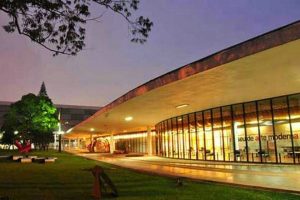 The Museum of Modern Art of São Paulo (MAM) is one of the most important cultural institutions in Brazil. It is located under the marquee of the Ibirapuera Park, in São Paulo, in a building inserted in the architectonic set designed by Oscar Niemeyer in 1954 and reformed by Lina Bo Bardi in 1982 to house the museum. It is a Non-Profit Civil Society Organization of Public Interest, whose purpose is the conservation, extroversion and expansion of its artistic heritage, the dissemination of modern and contemporary art and the organization of exhibitions and cultural and educational activities.

The museum was founded by Francisco Matarazzo Sobrinho, called Ciccillo Matarazzo, in 1948, concomitant to the emergence of the Museum of Modern Art of Rio de Janeiro, both inspired by the Museum of Modern Art of New York (MoMA) and fruits of the environment of great cultural effervescence And socioeconomic progress that characterized Brazil in the 1940s. Throughout its history, the MAM was notable for its active cultural agenda and for important initiatives aimed at the sedimentation and diffusion of modern art in Brazilian society, namely the creation of the International Biennial of Sao Paulo. In his early years he also admired a remarkable artistic collection, adding works of some of the most important national and international names of the visual arts in the twentieth century.

Created in 1948 by Italian-Brazilian industrialist Francisco Matarazzo Sobrinho (Ciccillo Matarazzo) and his wife, the famous São Paulo aristocrat Yolanda Penteado, the Museum of Modern Art of São Paulo, was one of the first institutional seats of modernist artistic production in the country . The museum model was that of the MoMA in New York, then presided over by Nelson Rockefeller, who gave instructions and works for the new foundation.

The general statutes of the new MAM envisaged the constitution of an entity dedicated to encouraging the artistic taste of the public, in whatever manner deemed convenient, in the field of plastic arts, music, literature and art in general.

Like a gypsy or a nomad, the history of the MAM-SP is marked by several changes of thirst and direction. It was founded in 1948 by Francisco Matarazzo, and its headquarters was at Rua Sete de Abril. In the words of the founder himself, the objectives of the MAM were: “to encourage the artistic taste of the public, in whatever way they are deemed convenient, in the field of plastic arts, music, literature and art in general.”

The inaugural exhibition of the MAM, denominated From figurativism to abstractionism, deepened a discussion that began years before, on the opposition between the figurative art (of representation of the nature), already considered as retrograde, and the abstract (subjective) art, that had arisen two Decades before in Europe, considered the vanguard of the plastic arts.

Organized by the museum’s director at the time, the Belgian art critic Léon Degand, the show brought together 95 works, mainly by European artists – since financial problems prevented the work coming from the United States. In this exhibition could be seen names like Jean Arp, Alexandre Calder, Waldemar Cordeiro, Robert Delaunay, Wassily Kandinsky, Francis Picabia and Victor Vasarely. All abstractionists.

MAM keeps an annual program of temporary exhibitions, and produces every two years the Panorama of Brazilian Art, which maps the Brazilian contemporary production. Considering the growing importance of Brazilian art in the global context, Panorama has become a relevant event in the international cultural circuit.

Trying to address the multiple necessities of the contemporary society and its diversity, MAM develops several cultural and educational activities such as courses, workshops, experimental movie sessions, music projects and presentation of performances for all publics, as well as avant-garde offerings such as audioguides with artworks’ description for blind people, and videoguides or sign language tours for deaf people. The Museum’s mission to spread Brazilian art and culture is also supported by its library, that offers more than 65 thousand titles and documents, and its publishing division, which develops catalogs, books and the “Moderno MAM” quarterly magazine.