Mosfilm is a film studio which is among the largest and oldest in the Russian Federation and in Europe. Its output includes most of the more widely acclaimed Soviet-era films, ranging from works by Andrei Tarkovsky and Sergei Eisenstein, to Red Westerns to the Akira Kurosawa co-production Dersu Uzala and the epic War and Peace.

Mosfilm is the leading Russian film company producing almost all the film- TV- and video products in the country. The studio’s production capacity is more than a hundred films a year. Mosfilm produces, distributes and sells film-, TV- and video products. It also provides services relating to all phases of filmmaking. 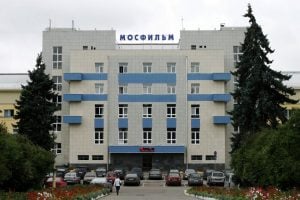 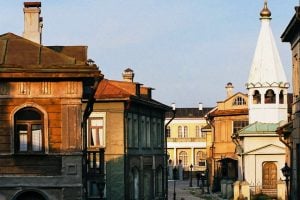 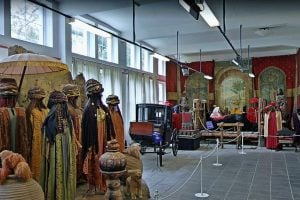 Most films are made in studios on the territory of Mosfilm. They are headed by the leading Russian cinematographers: Vadim Abdrashitov, Stanislav Govorukhin, Georgiy Daneliya, Svetlana Druzhinina, Vladimir Menshov, Vladimir Naumov, Gleb Panfilov, Sergei Solovyov, Alla Surikova, Andrei Eshpai and others.

Mosfilm provides all kinds of work on the editing of films and video films, telecopying and computer graphics, and this work is carried out through the use of most advanced equipment. The Studio created the unique museums of historical costumes, prop and vintage cars. Mosfilm is the only studio that has preserved its film archive and carries out a great amount of work on the restoration of films from its golden collection at its own expenses. Mosfilm is actively involved in Russian film festivals in many countries and runs retrospective shows and screenings in Russia, as well as in other countries.

History
The Moscow film production unit with studio facilities was established in November 1923 by the motion picture mogul Aleksandr Khanzhonkov (“first film factory”) and I. Ermolev (“third film factory”) as a unit of the Goskino works. The first movie filmed by Mosfilm was On the Wings Skyward (directed by Boris Mikhin).

In 1927 the construction of a new film studio complex began on Mosfilmovskaya Street in Sparrow Hills of Moscow. This film studio was named after the Moscow amalgamated factory Soyuzkino the Tenth Anniversary of the October. In 1934 the film studio was renamed to Moskinokombinat, and in 1936 – to Mosfilm. During World War II the film studio personnel were evacuated to Alma-Ata (August 1941) and merged with other Soviet production units into the Central United Film Studio (TsOKS). The Mosfilm personnel returned to Moscow at the end of 1943.

The famous Mosfilm logo, representing the monument “Worker and Kolkhoz Woman” by Vera Mukhina and Spasskaya Tower of the Kremlin, was introduced in 1947 in the musical comedy, Spring directed by Grigori Aleksandrov and starring Lyubov Orlova and Nikolai Cherkasov.

By the time the Soviet Union was no more, Mosfilm had produced more than 3,000 films. Many film classics were shot at Mosfilm throughout its history and some of these were granted international awards at various film festivals.

Having overcome the crisis of the 90s, the studio has not only preserved its traditions and professions in the sphere of cinematography but became a highly profitable enterprise. In the past nine years, it has increased its profitability by more than 10 times.

Nowaday
After the dissolution of the Soviet Union, Mosfilm continued operations as a quasi-private production company, led by film director Karen Shakhnazarov. As of 2005, the company embraced ten independent studios, located within 13 sound stages occupying an area of 13,000 sq. meters. Tours through this “Russian Hollywood” become increasingly popular, as they allow to view Mosfilm’s enormous depot with 170 tanks and 50 vintage cars. The biggest sound stage is leased annually to hold the Golden Eagle Awards.

Nowadays Mosfilm consists of the new technologies, active film-making, high skilled creative workers, rare collections. All this allows the studio to be rightly considered the leading enterprise of the Russian film industry and to contribute hugely to the revival of the Russian cinema.

More than 1720 films were shot at Mosfilm, many of which were included in the Golden Fund of World Cinema, won numerous awards at various film festivals. Mosfilm, which manages the rights to a collection of films on its own, earned nearly 250 million rubles in the sale of rights in 2010.

Mosfilm is state-owned (FSUE) and operates as a film concern, providing its production facilities to various film companies and creative associations that rent not only film studios, but also offices (the so-called “premises for the working group”), as well as various specialized complexes – from pyrotechnic to motor transport.

In addition to the production of films, the Mosfilm studio is engaged in duplication of Western-made feature films commissioned by various distribution companies.

In the 1970-1980s, Mosfilm assisted the KGB of the USSR in the makeup of doubles of exposed agents. So KGB officers, who were made up by Mosfilm under Alexander Ogorodnik and Adolf Tolkachev, were able to contact the CIA resident at the US Embassy in Moscow, who were detained. At the same time, the quality of makeup was such that the Americans could not recognize that the “fake” Gardener (played by KGB officer Viktor Pesok) got in touch with them and continued to communicate with agent Trianon even after Marta Peterson was detained in a cache.

April 28, 2011 the corporation ” the Google ” and “Mosfilm” announced the signing of a partnership agreement and the launch of “channel Mosfilm ” on video portals, ” the YouTube “. As of 2019, the leader of the channel’s views is Vladimir Menshov ’s picture “ Love and Pigeons, ” which gained more than 20 million views. The second and third places are shared by the films “ Ivan Vasilyevich Changes the Profession ” and “ Operation“ Y ”and Shurik’s Other Adventures ”, each having 18 million views. At the end of 2018, the share of foreign audience on the channel amounted to 59%.

Mofilm museum
In several halls of the Mofilm museum, the elements of various scenery are collected – the old Copenhagen from the film “Andersen. Zhizn bez lyubvi” (Andersen. Life Without Love) by Eldar Ryazanov, a replica of the huge bull, in the carcass of which doctors put poisoned Cesare Borgia in the film “Yady ili Vsemirnaya istoria otravleny” (Poisons or the World History of Poisoning), ancient postal and royal carriages, and much more.

The highlight of our collection is the vintage cars. Peugeot phaeton made in 1913, open Rolls-Royce cabriolet of 1913, Russo-Balt of 1913 – all these cars feel pretty good in XXI century. All of them are restored, brought back to a working order and, despite their age, look like they have just come from the conveyor belt. Some of them are represented in Russia in a single copy. Each exhibit has an unusual story behind it.

The famous Volga could be seen in such films as “Beregis’ Avtomobilya” (Beware of the Car) and “Brilliantovaya ruka” (The Diamond Arm). “Mercedes-Benz” produced in 1938 was a car in which Stirlitz traveled in “17 mgnoveniy vesny” (Seventeen Moments of Spring), Buick-Eight made in 1941 once belonged to the Manchurian emperor Henry Puyi. The Packard car created in 1937 for a long time was the official car of the Soviet political elite – Voroshilov and the legendary pilot Chkalov rode in the car of this kind. Here you can also see the legendary governmental cars ZIL-101 of the year 1936 and ZIS-110 of the year 1945, trucks, buses and military vehicles from the times of the first and second World Wars.

The exposition of the museum is changing constantly, because many exhibits are still used in films, so when some items are sent to the film set, others are taken from the richest collection of the studio.

The library of Mosfilm-Info contains the unique collection of fiction and specialized literature, as well as pictures and photographic materials on history, art, architecture, industry and agriculture, military affairs and transport, ethnography, household, characters, costumes, etc. We provide detailed and reliable information on a wide variety of topics, helping the scriptwriters to fulfill the intent of the future film more accurately, and helping the production designers and costume designers to recreate any country or era on the screen

The archive deals with the films that were made in the studio since the 1920s. Here we keep and gradually convert into electronic format film shots, photos from the shoots, portraits, shot lists, literary and director’s scripts, the reviews collections, diplomas to awards won by our films on different festivals and showcases. Also, we can provide you with the precise information about the Mosfilm films and with photo materials of high quality related to those films (some of our photo materials you can find here)

The Video Library was founded not so long ago, but it already has a wide variety of videotapes and DVDs which is regularly updated. The Screening room of the video library equipped with the home cinema system allows enjoying the masterpieces of Russian and world cinema fully. Besides, Mosfilm Info has a collection of sketches of costumes and scenery for our films, film posters, and also the prizes and valuable gifts presented to the studio in different years.