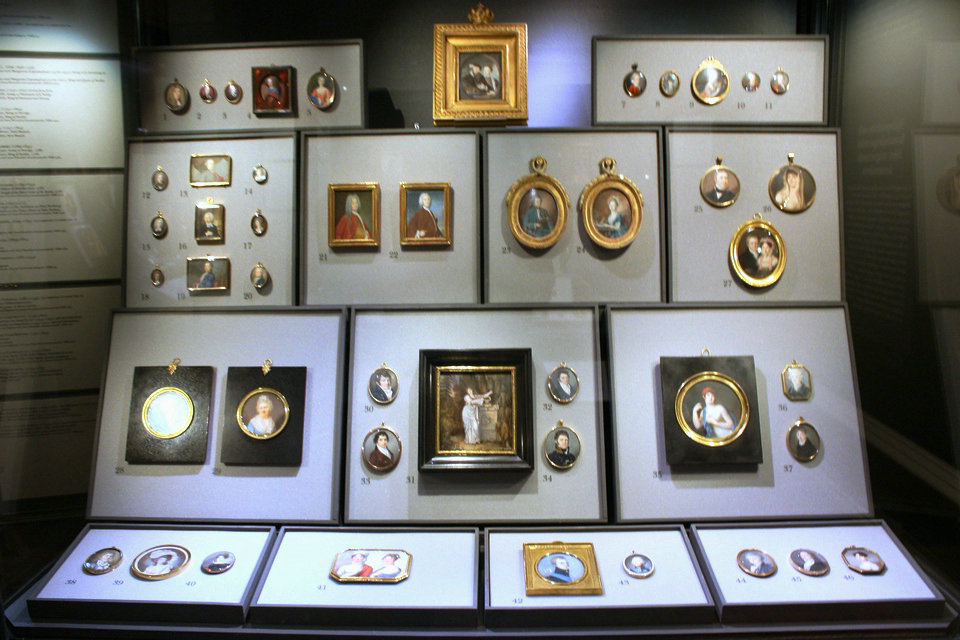 The National Museum’s collection of miniatures amounts to approximately 5,200 numbers. The works in the collection have many different origins, not least among different royalty, but of particular importance are two donations and a large number of acquisitions made recently. The donations were made by Carl Fredrik Dahlgren in 1894 and Hjalmar Wicander1927. Dahlgren was a great collector and focused on Scandinavian and German works. His gift consisted of a total of 4,435 miniatures which gave the collection a very wide range. Wicander, in turn, did not gather as widely but concentrated on works of very high quality. After his donation, he continued to finance and otherwise engage in important acquisitions. Of great importance is also the fund that Wicander set up the year after the donation, which has made it possible to supplement the collection with some of its most prominent numbers today by artists such as Francisco de Goya and Louis Marie Autissier . The collection is rich in works by Peter Adolf Hall, the Swedish miniature painter who made great success in France. During the period 2009-2013, the collection was shown in a permanent exhibition.

Portrait Miniatures Treasury
The museum’s collection of more than 5,200 miniatures is exceptional, the largest in the world. It is also at the forefront in terms of artistic quality and content. A portrait miniature could serve as an exclusive calling card or a lover’s gift – and was often carried close to the recipient’s heart. Now more than 600 of them are on display, everything from Nicholas Hilliard’s depiction of Queen Elizabeth I to Siri Derkert’s 20th century portrait of her son Carlo.

Old office rooms that have again been turned into exhibition space now house the Treasury. The color scheme is inspired by the building’s architect Stüler’s original proposal for the intermediate floor. Here 1,170 small objects of major significance are on display.

For a number of reasons, Nationalmuseum has the world’s largest collection of portrait miniatures, 5,200 in total, with the number increasing steadily. A significant portion derives from the master collector Carl Fredrik Dahlgren, while the more exclusive works were donated by Hjalmar Wicander, a cork factory owner.

Production of bottle corks for the brewery industry provided the basis of his fortune. Wicander also donated funds specifically for additional purchases of miniatures. A portrait miniature could serve as an exclusive calling card or a lover’s gift – and was often carried close to the recipient’s heart. Now more than 600 of them are on display, everything from Nicholas Hilliard’s depiction of Queen Elizabeth I to Siri Derkert’s 20th century portrait of her son Carlo. For the first time, the miniature paintings are shown, together with other accessories such as jewelry, boxes and pocket watches.

The museum has been collecting contemporary jewelry over a lengthy period, but never previously actively acquired older objects. Consequently, in recent years significant complementary aquisitions have been made. Visitors can now make a close-up study of substantial parts of this collection. Jewelry is traditionally associated with women, but the exhibition also has a selection of accessories for men, ranging from canes to medals.

The museum’s activities also extend outside the building at Blasieholmen. For example, the National Museum belongs to the Swedish State’s portrait collection, which is on display at Gripsholm Castle. An extensive deposit business from the museum holds several authorities and institutions with art. In addition, items from the museum’s collections are displayed at a number of other museum institutions around the country.