LS Lowry is one of Britain’s favourite artists. His unique style and personal vision set him apart from the major art movements of his time. Only in recent years is the range and complexity of his work becoming more fully appreciated.

The exhibition of ‘Lowry Favourites’ , at the The Lowry Arts Centre, named after Salford’s favourite son. Lowry favourites brings together a selection of works from the Lowry Collection, which includes over 400 paintings and drawings, alongside important loans from public and private collections around Britain. 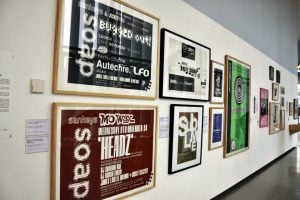 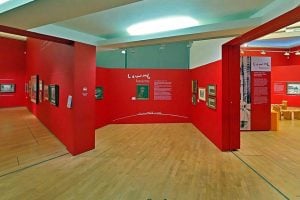 Biography
Laurence Stephen Lowry (1 November 1887 – 23 February 1976) was an English artist. Many of his drawings and paintings depict Pendlebury, Lancashire, where he lived and worked for more than 40 years, Salford and its vicinity.

Lowry is famous for painting scenes of life in the industrial districts of North West England in the mid-20th century. He developed a distinctive style of painting and is best known for his urban landscapes peopled with human figures often referred to as “matchstick men”. He painted mysterious unpopulated landscapes, brooding portraits and the unpublished “marionette” works, which were only found after his death.

Works
Lowry’s work is held in many public and private collections. The largest collection is held by Salford City Council and displayed at The Lowry. Its collection has about 400 works. X-ray analyses have revealed hidden figures under his drawings – the “Ann” figures. Going to the Match is owned by the Professional Footballers’ Association (PFA) and is displayed at The Lowry along with a preparatory pencil sketch.

The Tate Gallery in London owns 23 works. The City of Southampton owns The Floating Bridge, The Canal Bridge and An Industrial Town. His work is featured at MOMA, in New York City. The Christchurch Art Gallery Te Puna o Waiwhetu in Christchurch, New Zealand has Factory at Widnes (1956) in its collection. The painting was one of the gallery’s most important acquisitions of the 1950s and remains the highlight of its collection of modern British art.

Lawrence Lowry set himself apart by painting not pretty pictures but the industrial landscape that he found around him in Salford. He moved to the area as a young man after the unexpected death of his father, and the financial hardship that followed. At first he hated the area, but gradually it grew on him and he earned his living there as a clerk and rent collector, an occupation that enabled him to connect with the industrial landscape and the people who lived there.

Knowing little about LS Lowry other than his well known scenes of ‘matchstick men’ against a backdrop of factories and chimneys belching smoke, I left with a better feel of the artist who was at once a simple, unassuming man who painted what he saw before him, but also a complex character whose loneliness and frustrations come through in his art.

There are the early portraits drawn from his years of part-time study and life drawing classes. The striking man with red eyes started out as a normal portrait but in a fit of frustration, Lowry transformed it into an angry red-eyed figure. After watching the short film in the exhibition, I came away with the sense of Lowry as a complex man, whose continual drawing and painting covered the working people, the factory workers of Salford and the down and outs that he saw on the street with an unflinching eye, whose life was isolated by choice, but who had no pity for himself. And yet by all accounts he had a sense of mischief, enjoying a good story, and keeping a suitcase by the front door, so he could pretend he was just going away, if any unwanted fans knocked on the door.

About The Lowry
The Lowry is one of the UK’s leading arts organisations and home to one of the most ambitious artistic programmes in the industry. As well as being the most visited cultural attraction in the North West, The Lowry also plays an important role on a local level – engaging with around 35,000 people each year from its local communities through programmes that nurture talent, develop skills and employability and inspire community regeneration.

The Lowry is a registered charity committed to using visual and performing arts to enrich people’s lives. We present audiences with a diverse programme of theatre, opera, musicals, dance, music, comedy and visual art as well as events and activities to expand the horizons of audiences and artists alike.

At the heart of our work is a commitment to our local communities and young people. Tapping into the work on our stages and in our galleries, we offer thousands of free creative participation opportunities each year. We are passionate about nurturing talent, developing creative professionals of the future and raising aspirations.