The Japanese Gallery, on first and second floor. Buddha statues from the 9th to the 18th Century A.D. and objects from the 18th Century to the 20th, where you can admire large painted screens and a series of lacquered and gilded wooden sculptures.

The rooms dedicated to Japan contain wooden statues inspired by the Buddhist tradition (12th to 17th century), beautiful screens from the early 17th century, paintings and polychrome woodcuts, as well as an extensive collection of fine lacquered works. The Himalayan galleries house major collections of Tibetan Buddhist art, with wooden and metal statues, ritual instruments, tempera paintings dating from the 12th to 18th century, and a series of carved and painted wooden covers for sacred texts.

Japan’s artistic production reveals the originality of what developed from the merging of refined traditional craftsmanship with an almost religious respect for the intrinsic qualities of materials, together with a willingness to welcome outside elements issued from the highest levels of cultural expression.

Buddhist-inspired statues (from the twelfth to the seventeenth century) can be found in the rooms dedicated to Japan, together with magnificent screens from the early seventeenth century, paintings and polychrome woodblock prints and a rich collection of finely worked lacquer objects. 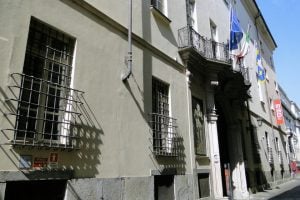 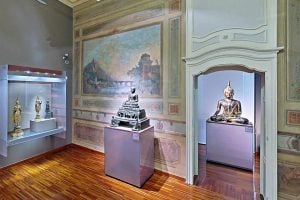 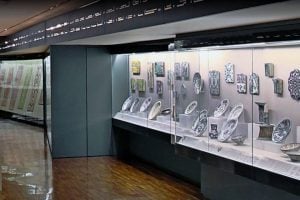 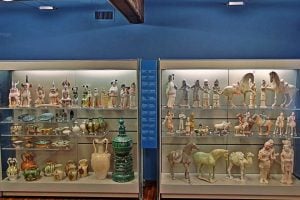 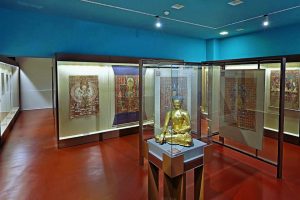 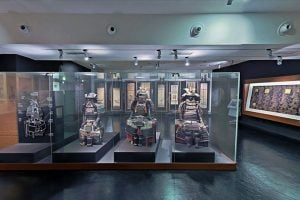 The Japanese collection reveals the uniqueness of the union between tradition, craftsmanship and expert knowledge of materials. In this section there are wooden statues (from the XII to the XVII century), screens from the XVII to the XIX century, fabrics, paintings and woodcuts, as well as lacquered objects, weapons and armor. The Japanese gallery is subject to periodic rotations of the works which mainly involve fabrics, paintings and prints.

One of the most important works of the collection, exhibited for short periods, consists of one of the few copies left in good condition of the famous woodcut of the Great Wave of Kanagawa, by the nineteenth-century artist Katsushika Hokusai.

MAO, the Museum of Oriental Art, is located in the historic 18th-century seat of Palazzo Mazzonis. The museum’s heritage encompasses some 1500 works, in part from the previous collections amassed by various city institutions, in part acquired in the past few years. The Museum’s exhibition layout is divided into five cultural areas: South Asia, China, Japan, the Himalayan Region and Islamic countries. This layout corresponds naturally with the building’s physical structure which is divided into the same number of interlinked but structurally separate exhibition spaces used to house the various sections.

The exhibits now housed in the new Oriental Art Museum in Turin are mostly works already present in the city’s Civic Art Museum. Others, however, were donated to the museum by the Piedmont Region, as well as by the Agnelli Foundation and the Compagnia di San Paolo.

The museum‘s exhibition space, which has been designed to host five different thematic areas, such as the entrance hall where you can observe typical Japanese Zen gardens. Each area, from this point on, enjoys a different characterization of the space and the works on display. On the ground floor you can admire artifacts from South Asia, most of which are very ancient, and from South-East Asia. On the first floor there are Chinese-made artifacts, including bronze and terracotta works dating back to 3,000 BC, and in the appropriate rooms, it is possible to admire numerous artifacts of Japanese art. But that is not all. In fact, on the third floor of the Oriental Art Museum of Turin there is also a collection of objects from the Himalayan region, while the top floor is entirely dedicated to Islamic art.