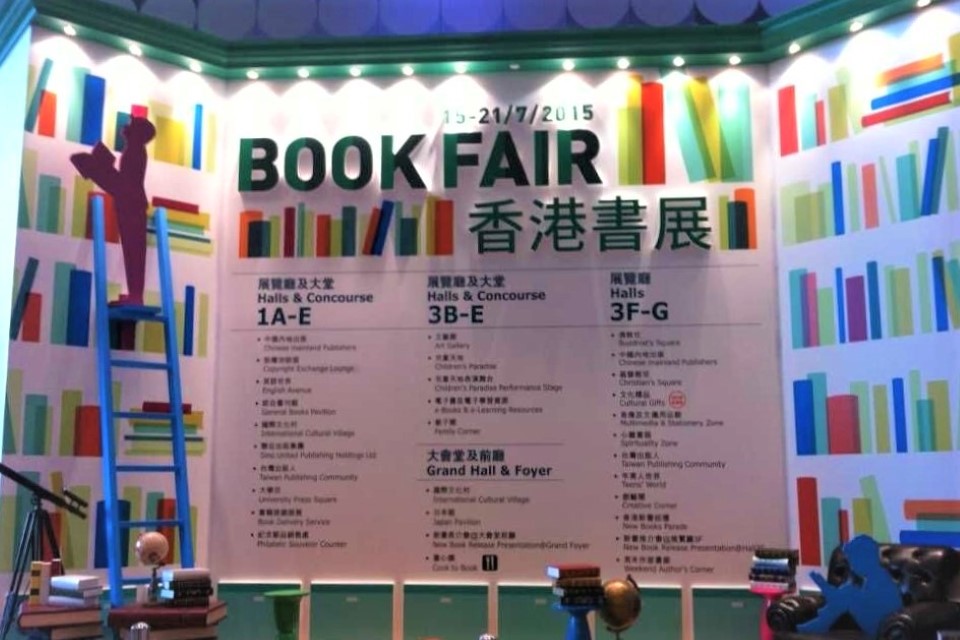 The 26th Hong Kong Book Fair, as highlight annual cultural event, last from July 15-21 at the Hong Kong Convention and Exhibition Centre (HKCEC) in Wan Chai. This year’s fair welcomes 580 exhibitors from more than 30 countries and regions present books on a wide range of topics and in various languages, giving members of the public the chance to enjoy their favourite books and take part in various cultural events. A range of on-site seminars and Art Gallery exhibitions, feature leading writers from around the world, also received an enthusiastic response.

By showcase and exhibiting books, printed matter, stationery, printing, compact discs and other multimedia publishing. Hong Kong Book Fair striving to promote local reading culture. Apart from extensively inviting the public to the Fair to visit and buy books, it also spares no effort in organising diversified cultural activities during the Book Fair period with a view to enhance the contents and quality of the Fair.

More than 350 cultural activities are arranged during the week-long event including seminars, readings, new book parades, storytelling sessions and performances with the aim of cultivating the public’s cultural awareness and interest in reading. Meanwhile, the Art Gallery, staged on the third floor of the HKCEC, presents a number of exhibitions to enrich readers’ cultural knowledge.

Award-winning author Ben Okri is among the stars at the Book Fair. The Nigerian-born poet and novelist, who won the Booker Prize for Fiction for his 1991 novel The Famished Road, is appearing at the Book Fair alongside renowned children’s author Keith Gray through collaboration between the British Council and the HKTDC.

Meanwhile, the Consulate General of France in Hong Kong & Macau and the HKTDC inviteed French illustrator Christian Heinrich, as well as writers Timothée de Fombelle and Christophe Ono‐dit‐Biot, to share their insights with readers at the fair. A Latin American pavilion featuring works in English and Chinese from Argentina, Colombia, Mexico and Peru also hold readings and presentations.

Highlights
Apart from echoing the Theme of the Year, Hong Kong Book Fair cultivate a love for reading, so that people enjoy a more colourful life in a more beautiful world.

The Book Fair comprises a number of zones, including English Avenue, which feature more than 30 exhibitors including Commercial Press, Metrobooks, Swindon and PageOne, bringing a range of English titles to the event. The other zones are e-Books & e-Learning Resource, Chinese Mainland Publishers, Chinese Taiwan Publishing Community and International Cultural Village.

Art Gallery
The Art Gallery this year comprised three sections; “Author of the Year – Leo Ou-fan Lee” featured the writer’s contributions spanning half a century in three sections: Man of Letters; Scholar; and Amateur. Professor Lee was born in Henan Province and is a commentator, columnist and writer whose notable works include Shanghai Modern: The Flowering of a New Urban Culture in China, 1930-1945. Three seminars focus on Professor Lee and his work over the years.

Apart from the Author of the Year exhibition, Art Gallery highlights include a Cantopop celebration. The “Lyrics That Moved A Generation: Half A Century Of Cantopop” feature works of famous lyricists since the genre became popular in the 1970s. Several renowned local lyricists, including Cheng Kwok-kong, Lo Kwok-chim, Poon Yuen-leung, Jolland Chan, Albert Leung and Siu Hak share insights with readers and Cantopop lovers.

Seminar Series
This year’s Open Public Forum moderated by Sir David Tang was held on 17 July from 5 to 7 pm at the HKCEC’s Theatre 1 & 2. Speakers include Swiss writer Alain de Botton, a philosopher and author of 14 bestselling books including Essays in Love, which was adapted into the film My Last Five Girlfriends.

Mr Montefiore is known for his historical masterpieces including Young Stalin and Jerusalem and enjoys widespread popularity through his fascinating portrayal of famous and infamous personalities.

Christian Heinrich has been a French children’s book illustrator since 1989. He is the author of the series Les P’tites Poules. Mr Heinrich has been focusing on inspiring children and establishing readers’ understandings through illustration.

A wide range of authors from across Asia was at the Book Fair, including George Yeo, Chairman of Kerry Logistics and Singapore’s former Minister for Foreign Affairs, who launch his book The New Maritime Silk Road and its Impact on Hong Kong and Singapore.