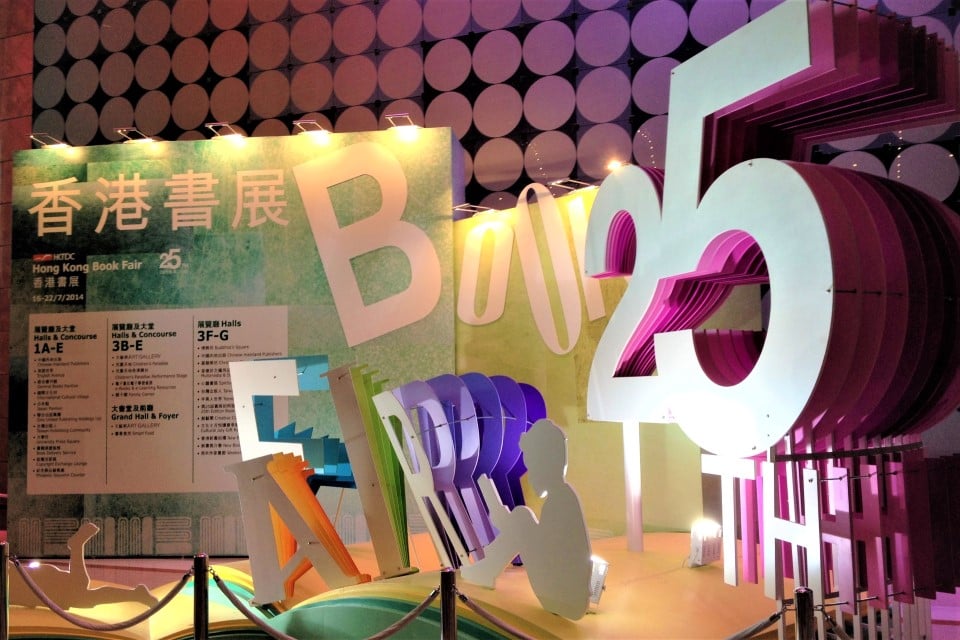 This year’s fair welcomes 570 exhibitors from 31 countries and regions present books on a wide range of topics and in various languages, giving members of the public the chance to enjoy their favourite books and take part in various cultural events. A range of on-site seminars and Art Gallery exhibitions, feature leading writers from around the world, also received an enthusiastic response.

By showcase and exhibiting books, printed matter, stationery, printing, compact discs and other multimedia publishing. Hong Kong Book Fair striving to promote local reading culture. Apart from extensively inviting the public to the Fair to visit and buy books, it also spares no effort in organising diversified cultural activities during the Book Fair period with a view to enhance the contents and quality of the Fair.

More than 300 cultural activities are arranged during the week-long event including seminars, readings, new book parades, storytelling sessions and performances with the aim of cultivating the public’s cultural awareness and interest in reading. Meanwhile, the Art Gallery, staged on the third floor of the HKCEC, presents a number of exhibitions to enrich readers’ cultural knowledge.

Highlights
This year the Book Fair under the theme “Literature from Around the World”. In this biggest international cultural activity, seven seminar series featuring participation from several high-profile authors and speakers, including Barbara Demick, Kyoko Nakajima, Li Ao and Yan Geling.

Apart from echoing the Theme of the Year, Hong Kong Book Fair cultivate a love for reading, so that people enjoy a more colourful life in a more beautiful world.

Fair pavilions include English Avenue, Teens’ World, e-Books and e-Learning Resources, and Children’s Paradise, offering “Storytelling by Celebrities.” The International Cultural Village feature half a dozen exhibitors from Japan, in the fair’s first Japan Pavilion. In all, more than 20 countries and regions are showcasing their literature at the cultural village, including first-time exhibitors Colombia, Israel, Kazakhstan and Saudi Arabia.

Art Gallery
Four special exhibitions were staged at the Art Gallery. Among them was “The Hong Kong Story: A Century of Books”, supported by Commercial Press (Hong Kong) Limited and Popular Holdings Limited, which attracted a lot of visitors. The traditional bookstore theme allowed readers to enjoy browsing for books, which proved to be popular. They could also create their own souvenirs at the woodblock printing experience zone. Other exhibitions, including: “Author of the Year – Dung Kai Cheung”, “Literary Hong Kong” and “A Journey to Fujian”, were also extremely popular.

“A Journey to Fujian,” examining the work of Lin Yutang and Bing Xin, along with Shoushan stone carvings and Dehua porcelain. “The Hong Kong Story: A Century of Books,” features the evolution of the local publishing industry, including a traditional Hong Kong book store. The Art Gallery also includes an exhibition on Dung Kai Cheung, the fair’s “Author of the Year.” Three seminars focus on Mr Dung and his work over the years.

Kelly Yang opens the English authors’ seminar series in the morning of July 16. Ms Yang is the author of three children’s books and founder of a local writing and debating school for children. Followed in the afternoon by French author François Drémeaux, who has lived in Hong Kong for seven years and give a seminar on the French presence in Hong Kong over the years.

On July 17 morning, Frank Dikötter, Chair Professor of Humanities at the University of Hong Kong, and the author of nine books, discuss his latest book, The Tragedy of Liberation. A history of the Chinese revolution, it was named one of the best books of 2013 by The Economist and The Sunday Times and short-listed for the Orwell Prize. In the afternoon, Barbara Demick, the Beijing Bureau Chief of the Los Angeles Times, talk about her book Nothing to Envy: Ordinary Lives in North Korea.

Susan Barker, Lawrence Osborne and Peter Suart are the British writers on hand. Mr Suart is also an illustrator and performer. Ms Barker’s third novel, The Incarnations, set in Beijing, has just been published this month. Mr Osborne, who lives in Bangkok, has written a number of well-received books. His novel The Forgiven was named one of the best books of 2012 by The Economist and The Guardian. His latest novel, The Ballad of a Small Player, is set in Macau.

French authors François Drémeaux, David Foenkinos and Olivier Lebé are participating. Mr Foenkinos has written 12 novels, including Delicacy, which has sold over a million copies in France. The book has been translated into 40 languages. A movie version, directed by Mr Foenkinos and his brother Stéphane, was released last year and nominated for Best Feature and Best Adaptation at the Cesar Awards.

The Renowned Writers Seminar Series, organised by the HKTDC, Ming Pao and Yazhou Zhoukan, presents 20 writers from the Chinese mainland, Hong Kong and Taiwan. They include Li Ao and his son Li Kan, Liu Chao-shiuan, Geling Yan and Yan Lianke.

Cultural July
As an extension of the Book Fair, the on-going month-long “Cultural July” festival features a total of more than 500 cultural events across Hong Kong which have so far attracted 250,000 attendees.

Cultural July took place alongside the Book Fair. The festival began 23 June and continues through the end of July. It includes more than 180 events, ranging from seminars and author sessions to cultural tours and other activities at book stores, shopping malls, educational institutions, coffee shops and other venues throughout Hong Kong.

Book Fair for All
The SHKP Read To Dream 2014 programme sponsored nearly 1,200 underprivileged children from 35 schools to visit the Book Fair and participate in cultural events. Each child received HK$250, funded by SHKP and Partnership Fund for the Disadvantaged, to purchase books.