The facilities of the former Military College house objects and images that tell the history of Mexico from the time of the Conquest (1521) until the twentieth century. Its rooms cover the different periods that the country has lived through samples of daily life and the social, political, religious and military features that shaped it:

In its six decades of existence, the National Museum of History housed in Chapultepec Castle has supported the creation of other national museums and those in other states of Mexico by ceding objects that are the historical patrimony of the Mexican people under the jurisdiction of the Instituto Nacional de Antropología e Historia (National Institute of Anthropology and History; INAH). At the same time, it has continued to acquire pieces for its collections. As a result, today its holdings total close to one hundred thousand pieces. A part of the collection is on display in the permanent exhibition galleries, while the rest of it is in storage, organized into the following curatorial areas: 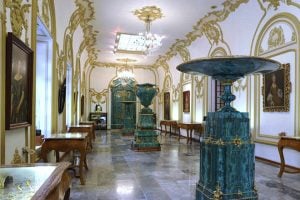 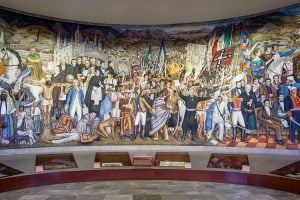 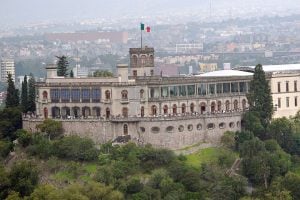 Throughout three centuries the foundations of a new town were molded: that of present-day Mexico. The indigenous, European, Asian and African elements were mixed to give life to a new multicultural and multi-ethnic society.

In these rooms, topics such as evangelization and missions are addressed; the ideas that in Europe caused the New World; the transformation of the territory, agriculture, mining and commerce; the changes that the illustration brought in America and the new political and economic measures that the Crown took during the last decades of the viceroyalty.

Separated by an ocean, the inhabitants of Europe and the continent that would later be called America did not meet until the end of the 15th century. In 1492 they entered into contact for the first time, marking the beginning of a new stage in world history.

The emancipatory war can be divided into four major periods: the one with the greatest geographical insurgency, with Hidalgo’s troops (1810-1811); the one of greater intensity, with Ignacio Lopez Rayón, Jose Maria Morelos and other heads (1811-1815); the one of decadence and fragmentation, with leaders like Guadalupe Victoria, Manuel Mier and Terán, Xavier Mina and his companions (1815-1819); and that of consummation, with the union of insurgents and realists in the Trigarante Army headed by Agustín de Iturbide and Vicente Guerrero, and with the adhesion of the people to the Plan of Iguala and the Treaties of Córdoba (1821).

This room includes episodes and phenomena that happened from the conspiracy boards and the call to take up arms, until the official declaration of independence; and exposes tactics and characters that stood out during the conflict.

In these rooms there is a historical review of the different forms of government that were tested in Mexico during its first years of independence, and of the international conflicts in which it was involved.

The liberal republican project triumphed over the second empire and was consolidated in the following decades, until it was questioned in 1910. Thanks to new laws and technical advances of the time, national political stability and a favorable international context , between 1890 and 1910 many factories, mines and haciendas enjoyed a hitherto unknown bonanza; security in capital investment was guaranteed, public finances were reordered and the first banks were founded.

These rooms are explored by the governments of Benito Juárez, Sebastián Lerdo de Tejada, Manuel González and Porfirio Díaz, and their consequences in the political life of the country.

For many historians, the twentieth century in Mexico began in 1910. The new Constitution, proclaimed on February 5, 1917, would mark the political and social future of Mexico throughout the century.

Historical Collection
The National Museum of History is heir to the former National Museum of Archaeology, History and Ethnography at Moneda Street number 13, in downtown Mexico City, begun in 1910. When the National Institute of Anthropology and History was founded in 1939 it also provided for the creation of a new museum. As a result, the collections forming part of the departments of Colonial and Modern History and Ethnography went on to become part of the exhibition in Chapultepec Castle.

The former museum had, in turn, come from the National Museum created during the government of Guadalupe Victoria in 1825, in rooms in the University. From there it was moved, under the orders of Maximilian of Habsburg in 1865, to the building had housed it, the Casa de Moneda or former Mint, beside the National Palace.

Although the historical collections were sparse around the 1880s, they grew with the acquisition of objects related to the events and heroes of the Nation. For example, before the end of the nineteenth century this museum had a group of paintings of viceroys, the sculpture of Miguel Hidalgo y Costilla, Vicente Guerrero’s military dress coat, Agustín de Iturbide’s scepter, and a suit, spectacles, and metal crowns of Benito Juárez, and the Christofle silver dinner set of Maximilian of Habsburg.

The institution increased its holdings with pieces acquired during the Celebrations of the First Centennial of the Independence of Mexico: dress coats and military accessories, jackets, a religious ornament and the portrait of José María Morelos y Pavón, as well as the keys to Mexico City, objects returned by Spain and France; the font where Miguel Hidalgo y Costilla was baptized, brought from Cuitzeo de los Naranjos, Guanajuato, and the confessionary send from the town of Dolores. From the National Museum of Artillery—which was created during the administration of Porfirio Díaz and closed in 1914—came the historical collections, weapons, flags, and military uniforms. It should be noted that around 1924 the numismatics collection alone grew by eighteen thousand coins made of gold, silver and copper.

However, most of the collections that the National Museum of Archaeology, History, and Ethnography kept in the Department of Colonial and Modern Ethnography came from two major lots: that of military man Martín Espino Barros and mining entrepreneur Ramón Alcázar. The former was the largest by far, with 60,369 pieces, including coins, medals, crosses, reliquaries, insignia, military medals, chain links, locks, keys, samplers, decorative combs, ink wells, penholders, fans, belt buckles, candlestick holders, spurs, horse tack, snuffers, pipes, chests, writing desks, vases, basins, flower pots, buttons, and military appliqués. With this acquisition the former museum was able to form the Department of Retrospective Industrial Art, created by decree in 1908, which then was named Minor Arts, and later Colonial and Modern Ethnography.

The second lot entered the establishment in 1917 and since then it has been known as the Alcázar Collection. It is composed of more than 7,233 pieces from the viceregal period and the nineteenth century: fans, samplers, weapons, old watches of all sorts, military insignia, medals, furniture, snuff boxes, cigar cases, cigarette cases, matchboxes, chain links, sweets containers, jewelry boxes, stamps, sculpture, decorative combs, a wide array of jewelry (earrings, rings, bracelets, pins that formed complete and half sets), paintings, and many other ivory, porcelain, Talavera, bronze, and enameled metal objects.

National History Museum, Chapultepec Castle
The National Museum of History is the Chapultepec Castle that holds the memory of the history of Mexico, from the conquest of Tenochtitlan to the Mexican Revolution. Its rooms show a diversity of objects representative of four centuries of the history of Mexico. The museum is located in the Castillo de Chapultepec, whose construction began in 1785 during the government of the Viceroy of New Spain, Bernardo de Gálvez. Although it was created for rest home, over time it was adapted to different uses: it was a military school, imperial residence with Maximilian and Carlota (1864-1867), presidential residence and, since 1939, headquarters of the National Museum of History.

The museum has 12 permanent exhibition halls that present the historical trajectory of the country, from the Conquest to the Mexican Revolution; and 22 rooms in the area known as Alcázar, where the rooms of Maximiliano and Carlota and President Porfirio Díaz are recreated, as well as a room that recalls the assault on Chapultepec Castle.

Chapultepec Castle is located on top of Chapultepec Hill in the Chapultepec park. The name Chapultepec stems from the Nahuatl word chapoltepēc which means “at the grasshopper’s hill”. The castle has such unparalleled views and terraces that historian James F. Elton wrote that they can’t “be surpassed in beauty in any part of the world”. It is located in the middle of Chapultepec Park in Mexico City at a height of 2,325 meters (7,628 ft) above sea level. The site of the hill was a sacred place for Aztecs, and the buildings atop it have served several purposes during its history, including that of Military Academy, Imperial residence, Presidential home, observatory, and presently, the National Museum of History.

It was built at the time of the Viceroyalty as summer house for the viceroy. It was given various uses, from the gunpowder warehouse to the military academy in 1841. It became the official residence of Emperor Maximilian I and his consort Empress Carlota during the Second Mexican Empire (1864-1867). In 1882, President Manuel González declared it the official residence of the President. With few exceptions, all succeeding presidents lived there until 1939, when President Lázaro Cárdenas turned it into a museum.