Explore! is an interactive space within L’Aquàrium de Barcelona designed to raise children’s awareness of the marine world. It features over 50 interactivities in which children can touch, see, listen to, investigate and discover nature. In Explora!, three Mediterranean coastline environments are represented: The marshes of the Ebro Delta, a corner of the Costa Brava and an underwater cave in the Medes Islands.

Explore! is the main interactive space focused on children. It depicts three environments on the Mediterranean coast (the marshes of the Ebro Delta, the Costa Brava and the underwater caves of the Medas Islands ). 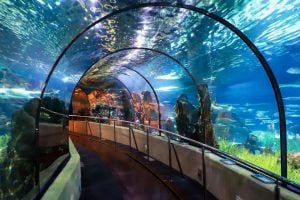 The Marshes Of The Ebro Delta
These shallow, brackish water lagoons are an important habitat for many animal species, especially migratory birds. Explora! invites you to learn about the marshes in many different ways, for instance, with magnifying glasses and by analysing footprints in the mud.

The Costa Brava
All along the Catalonian coastline, there are many sandy beaches that are protected by large rocky cliffs that fall spectacularly into the sea. Discover the marshes and beaches of the Costa Brava in this corner of Explora!, where you can feel the waves break over you, without getting wet of course!

The Underwater Cave of the Medes Islands
In this marine reserve just off the Catalonian coast, you can explore the reef and remains of a shipwreck – areas of refuge for many organisms. Discover them!

Barcelona Aquarium
The Barcelona Aquarium, located in the Old Port of Barcelona, is the main and only large aquarium in the city and in Catalonia. In addition, it is the most important center in the world on a Mediterranean theme. The complex was opened in 1995.

There are aquariums and exhibitions, as well as a cafeteria, shop, photo souvenir, auditorium and other services. The Aquarium has 35 different aquariums, 11,000 animals from 450 different species, an 80 meter underwater tunnel with more than 100 people working on it.

In 2015 it was visited by 1,549,480 visitors, ranking fourth among the most visited attractions in the city of Barcelona, only behind the Sagrada Familia, Park Güell and the FC Barcelona Museum.