The National Museum of Anthropology (MNA) has 24 exhibition halls, of which 23 are permanent and one is for temporary exhibitions, which are sometimes museum samples from various museums in the world.

The permanent rooms are distributed on the two floors of the building. The rooms dedicated to anthropology and pre-Hispanic cultures of the Mexican territory are located on the ground floor, from the Population of America to the Mesoamerican Postclassic Period. On the second level are the 11 ethnography rooms, where samples of the material culture of the indigenous peoples living in Mexico are currently exhibited. 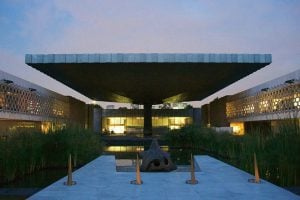 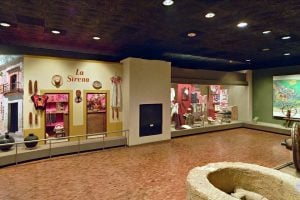 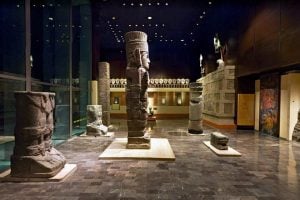 Indigenous Groups
Room 12
Mexico’s Indigenous groups are the bearers of a cultural patrimony characterized by a distinctive worldview, religion, economy, ceremonies, dances, rituals, as well as veneration of the ancestors, social organization and everyday life.

It exposes the course of the daily life of indigenous inhabitants of diverse cultures of our country, through the vision and utensils of diverse activities such as farmers, chinamperos, gatherers, hunters, builders, craftsmen, among others.

Gran Nayar
Room 13
Cora, Huichol, Tepehuan, Nahua, and mestizos live side by side in the territory of Nayarit, Jalisco, and Zacatecas. They stand out for artistically rendering their worldview in beadwork, yarn painting, and power objects

This room exhibits the cultures of the Coras (nayarite), Huicholes (wixaritari), Tepehuanes del sur (o’dam), Nahuas (Mexicans) and Mestizos, predominant in the territories of the great Nayar, and a mountain region that comprises territories of the states: Nayarit, Jalisco and Zacatecas. The cultures presented here are distinguished by artistically embracing their worldview on objects such as chaquira, stamen and power objects.

The tour of this room begins in San Blas where, according to mythology, the gods emerged from the sea. For nayares, the origin of all living beings is “down in the west”, that is, the Pacific Ocean. However, as the world was dark and “did not look good,” the ancestors decided to leave the sea and embark on the search for Dawns.

Puréecherio
Room 14
The Purépecha inhabited this Michoacán region since pre-Hispanic times. This ethnic group continues to practice ancestral activities such as fishing and celebrations.

The word «puréecherio» includes the land, the family, the ancestors, the villages, the community, the tradition and “the custom”, the latter being everything that is typical of the Purépecha. This room exhibits the Purepechas, ethnic group that continues to practice ancestral activities such as fishing and celebrations hunting agriculture, daily life among others.

This room is dedicated to the Otopma peoples and the various cultural islands of the Otomí-Mazahua peoples. Otopames groups are descendants of those who have contributed significantly to the social and economic development of the different historical moments that Mexico has gone through. They have settled in regions such as the Toluca-Ixtlahuaca Valley, in the State of Mexico, the Mezquital Valley, the Sierra de Hidalgo-Puebla, the Sierra de las Cruces, the Guanajuato plains, Ixtenco in Tlaxcala, the Veracruz lands and michoacanas. The Otopames peoples are heirs of the great Mesoamerican cultures that developed in the Central Highlands and subsequently spread through the Sierra Madre Oriental mountain range.

Among the figures exhibited are pieces of ceramics, palm and amate paper, as well as codices, masks, paintings, textiles and other objects of great identity value. More than 60 percent of the pieces were acquired in the communities, the rest are part of the collections of the National Museum of Anthropology that came from the old National Museum of Archeology, History and Ethnology. Among the oldest works are masks from the 19th century. The characteristic tenangos are also included, embroideries that in recent times have been recognized by art designers and collectors of the world as plastic works. These pieces of current indigenous art, whose elaboration involves two artists (a cartoonist and an embroiderer), represent characters from the community, parties, rituals and elements of nature.

Mexico National Museum of Anthropology
The National Museum of Anthropology (MNA) is one of the most important museum sites in Mexico and America. It is designed to house and exhibit the archeological legacy of the peoples of Mesoamerica, as well as to account for the country’s current ethnic diversity. The current MNA building was built between 1963 and 1964 in the Chapultepec Forest at the instruction of President Adolfo López Mateos, who inaugurated it on September 17, 1964. Currently, the MNA building has 22 permanent exhibition halls, two temporary exhibition halls and three auditoriums. Inside is the National Library of Anthropology and History.

The collection of the National Museum of Anthropology is made up of numerous archaeological and ethnographic pieces from all over Mexico. Among some of the most emblematic pieces of the collection is the Piedra del Sol – which is the heart of the museum itself – the colossal heads of the Olmec culture, the monumental Teotihuacan sculptures dedicated to the gods of water, Pakal’s tomb, the funeral offerings of Monte Albán, the stelae of Xochicalco, as well as a Toltec atlantean brought from Tollan-Xicocotitlan and the Tláloc Monolith that guards the entrance to the museum.

The MNA is one of the main tourist sites in Mexico. It attracts more than two million visitors every year. The museum is one of the largest museums on the continent.

The museum also hosts visiting exhibits, generally focusing on other of the world’s great cultures. Past exhibits have focused on ancient Iran, Greece, China, Egypt, Russia, and Spain.