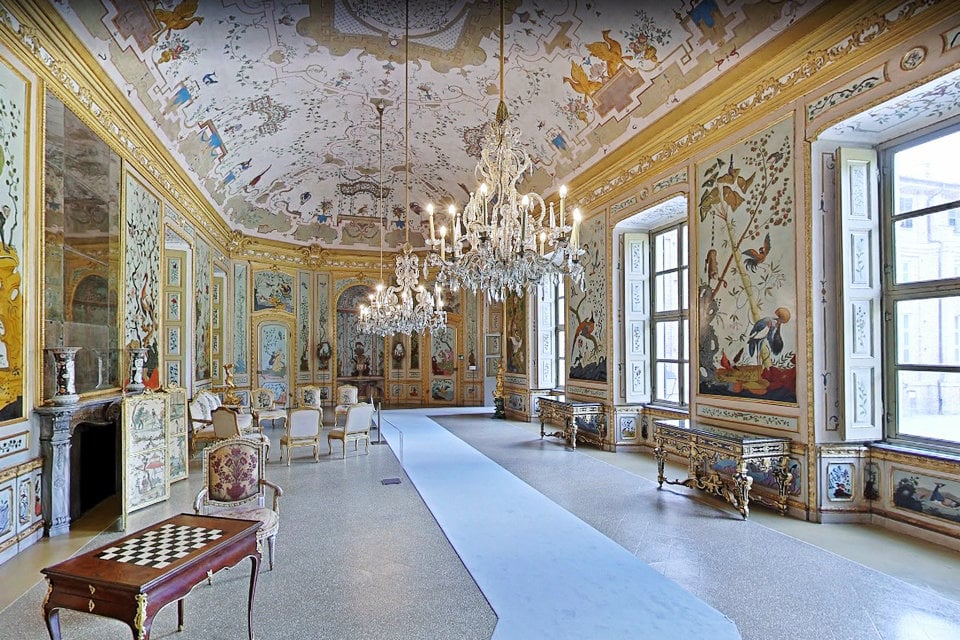 Also called “Appartamento di Levante” (as opposed to the specular Appartamento di Ponente), the set of rooms was enlarged under the direction of Benedetto Alfieri in the 18th century to accommodate the rooms of Benedetto di Savoia, Duke of Chiablese and son of King Carlo Emanuele III. The Apartment of the Levant has been the subject of a restoration work financed also thanks to the funds of the Lotto Game, according to what is regulated by law 662/96.

Gambling hall
The room of greater consistency for size and style in the apartments of the Duke of Chiablese is undoubtedly the gambling hall, a large space intended for the leisure of the court inserted into a rectangular hall with rounded corners and two large niches on the sides more short. The ceiling, decorated by Giovanni Pietro Pozzo in 1765, incorporates the same exotic and oriental motifs of the walls that play the role of an elegant frame for the game furniture inside the room: a mid-eighteenth century drawing room, a game table Louis XV style with a precious chessboard inlaid with ebony and ivory, as well as a desk with refined ivory figures inlaid from the beginning of the 18th century. Noteworthy are also the chinoiserie and the porcelains present in this environment that are well suited to the exotic decoration of the complex.

Hall of Mirrors and Cabinet of Pauline Bonaparte
The first room, decorated with a very special rococo style, is decorated with stuccos and mirrors from the walls to the ceiling, idea of Giovanni Pietro Pozzo in 1766 with the help of Michele Antonio Rapous in the realization of the boiserie. The chandelier dating back to the 1940s is more ancient and is decorated with sculptures of wrought iron birds.

The Cabinet of Pauline Bonaparte owes its fame to the fact that it was made to equip in current forms by Pauline Bonaparte, Napoleon’s sister, during her period of stay at the palace when her husband Camillo Borghese was appointed governor of Piedmont. The room, small in size, contains a beautiful marble bathtub, decorated with bas-reliefs representing the imperial insignia with the Napoleonic eagle.

Bonzanigo room
Became famous for the cabinet (which served as a library and desk) made by Bonzanigo, to which the room is now linked, this environment was also the scene of the work of other artists, including Giovanni Battista Alberoni, who created the ceiling fresco (1753), and Pietro Domenico Olivero, who took care of the over door between 1749 and 1753. To detach from the baroque decorations is the furniture, in classicist style, among which stands out the mirror of Bonzanigo which embeds an oval portrait (whose frame is also by the artist from Asti) depicting Giuseppe Benedetto di Savoia, count of Moriana.

Pre-closet room
Also called “Hall of hunts”, this room is decorated with a green damask cloth on the walls and with hunting scenes painted in 1753 by the Piedmontese painter Giovanni Battista Alberoni. The fame and name of the room itself, however, refer to a “pregadio”, that is a kneeler finely inlaid by the cabinetmaker Pietro Piffetti in 1758, made of walnut briar with inclusions in gilded bronze and characterized by a sumptuous coping.

Bedroom
The duke’s bedroom is characterized by an original purplish-red wallpaper fabric, with an over-door decorated in 1763 by Michele Antonio Rapous with flower and fruit motifs. Here are collected some of the most important and precious Piedmontese style furniture in the hunting lodge, among which a chest of drawers, a desk and a kneeler made by the cabinetmaker Pietro Piffetti with inlays of various woods, ivory, brass, turtle and mother of pearl stand out. In the room there is a four-poster bed with red Louis XV-style drapery.

Hunting residence of Stupinigi
The Palazzina di caccia of Stupinigi is one of the Residences of the Royal House of Savoy in northern Italy, part of the UNESCO World Heritage Sites list. Built as a royal hunting lodge in the early 18th century, it is located in Stupinigi, a suburb of the town of Nichelino, 10 km (6 mi) southwest of Turin

The original castle was owned by the Acaja line of the House of Savoy, Lords of Piedmont until 1418, and was sold to marquis Rolando Pallavicino in 1493. It was then acquired by Emmanuel Philibert in 1563, when the ducal capital was moved from Chambéry to Turin. The new palace was designed by the architect Filippo Juvarra to be used as a palazzina di caccia (“hunting lodge”) for Victor Amadeus II, King of Sardinia. Works started in 1729. Within two years construction was far enough advanced for the first formal hunt to take place.

Juvarra called upon a team of decorators, many of them from Venice, to carry out the decor of the palazzina interiors. In the reigns of Carlo Emanuele III and Victor Amadeus III the palazzina and its formal park continued to be extended, at first by Juvarra’s assistant, Giovanni Tommaso Prunotto, then by numerous North Italian architects, such as Ignazio Birago di Borgaro, Ludovico Bo, Ignazio Bertola and Benedetto Alfieri. The final building has a total of 137 rooms and 17 galleries, and covers 31,050 square meters. Polissena of Hesse-Rotenburg, wife of Carlo Emanuele III also carried out improvements. The original purpose of the hunting lodge is symbolized by the bronze stag perched at the apex of the stepped roof of its central dome, and the hounds’ heads that decorate the vases on the roofline. The building has a saltire plan: four angled wings project from the oval-shaped main hall.

The extensions resulted in separate pavilions linked by long angled galleries and a long octagonal forecourt enclosed by wings, extended forwards in two further entrance courts. Stupinigi was the preferred building to be used for celebrations and dynastic weddings by members of the House of Savoy. Here, in 1773, Maria Teresa, Princess of Savoy, married Charles Philippe, Count of Artois, brother of Louis XVI and the future Charles X of France.

Today the Palace of Stupinigi houses the Museo di Arte e Ammobiliamento, a museum of the arts and furnishings, some original to the palazzina, others brought from the former Savoia residences of Moncalieri and Venaria Reale. Stupinigi has the most important collection of Piedmontese furniture, including works by Turin’s three most famous Royal cabinet-makers, Giuseppe Maria Bonzanigo, Pietro Piffetti and Luigi Prinotti. Some of the sculptures of hunting figures are by Giovanni Battista Bernero. Additionally, temporary exhibitions are held in its galleries, such as the Mostra del Barocco (1963).