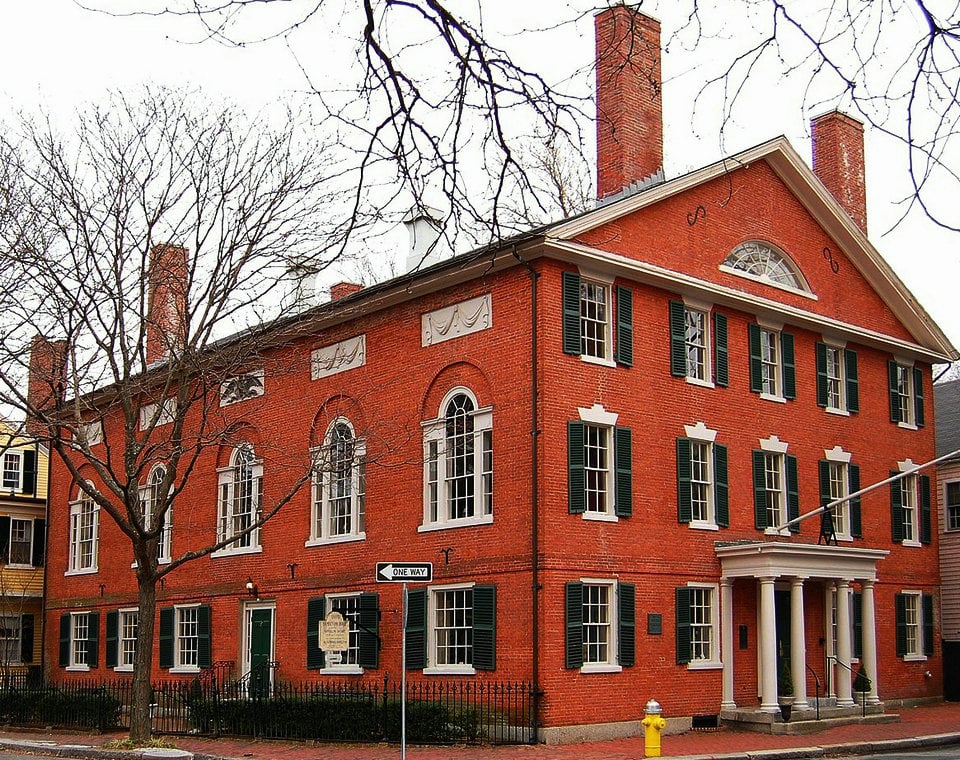 Georgian architecture was widely disseminated in the English colonies during the Georgian era. American buildings of the Georgian period were very often constructed of wood with clapboards; even columns were made of timber, framed up, and turned on an oversized lathe. At the start of the period the difficulties of obtaining and transporting brick or stone made them a common alternative only in the larger cities, or where they were obtainable locally. Dartmouth College, Harvard University, and the College of William and Mary, offer leading examples of Georgian architecture in the Americas.

Unlike the Baroque style that it replaced, which was mostly used for palaces and churches, and had little representation in the British colonies, simpler Georgian styles were widely used by the upper and middle classes. Perhaps the best remaining house is the pristine Hammond-Harwood House (1774) in Annapolis, Maryland, designed by the colonial architect William Buckland and modelled on the Villa Pisani at Montagnana, Italy as depicted in Andrea Palladio’s I quattro libri dell’architettura (“Four Books of Architecture”).

Georgian buildings, popular during the reigns of King George II and King George III were ideally built in brick, with wood trim, wooden columns and painted white. In what would become the United States, however, one found both brick buildings as well as those in wood with clapboards. They were sometimes painted a pale yellow. This differentiated them from most other structures that were usually not painted. Mostly box shaped with multiple chimneys.

A Georgian colonial house usually has a formally defined living room, dining room and sometimes a family room. The bedrooms are typically on the second floor. They also have one or two chimneys that can be very large.

Panel front door centred, topped with rectangular windows (in door or as a transom) and capped with an elaborate crown/entablature supported by decorative pilasters
Cornice embellished with decorative moldings, usually dentilwork
Multi-pane windows and fenestrations arranged symmetrically (whether vertical or horizontal)
Other features of Georgian style houses can include – roof to ground-level:

Roofs are Side-gabled, Gambrel, or Hipped
Chimneys on both sides of the home
A portico.
Small 6-paned sash windows and/or dormer windows in the upper floors, primarily used for servant’s quarters.
Larger windows with 9 or 12 panes on the main floors

Federal architecture
After independence, in the former American colonies, Federal style architecture represented the equivalent of Regency architecture, with which it had much in common.

Federal-style architecture is the name for the classicizing architecture built in the newly founded United States between c. 1780 and 1830, and particularly from 1785 to 1815. This style shares its name with its era, the Federal Period. The name Federal style is also used in association with furniture design in the United States of the same time period. The style broadly corresponds to the classicism of Biedermeier style in the German-speaking lands, Regency architecture in Britain and to the French Empire style.

Elfreth’s Alley in Philadelphia features Federal-style homes and is referred to as “Our nation’s oldest residential street,” dating to 1702.

In the early American republic, the founding generation consciously chose to associate the nation with the ancient democracies of Greece and the republican values of Rome. Grecian aspirations informed the Greek Revival, lasting into the 1850s. Using Roman architectural vocabulary, the Federal style applied to the balanced and symmetrical version of Georgian architecture that had been practiced in the American colonies’ new motifs of neoclassical architecture as it was epitomized in Britain by Robert Adam, who published his designs in 1792.

Characteristics
American Federal architecture typically uses plain surfaces with attenuated detail, usually isolated in panels, tablets, and friezes. It also had a flatter, smoother façade and rarely used pilasters. It was most influenced by the interpretation of ancient Roman architecture, fashionable after the unearthing of Pompeii and Herculaneum. The bald eagle was a common symbol used in this style, with the ellipse a frequent architectural motif.

The classicizing manner of constructions and town planning undertaken by the federal government was expressed in federal projects of lighthouses, harbor buildings, and hospitals. It can be seen in the rationalizing, urbanistic layout of L’Enfant Plan of Washington and in the Commissioners’ Plan of 1811 in New York.

This American neoclassical high style was the idiom of America’s first professional architects, such as Charles Bulfinch and Minard Lafever. Robert Adam and James Adam were leading influences through their books.