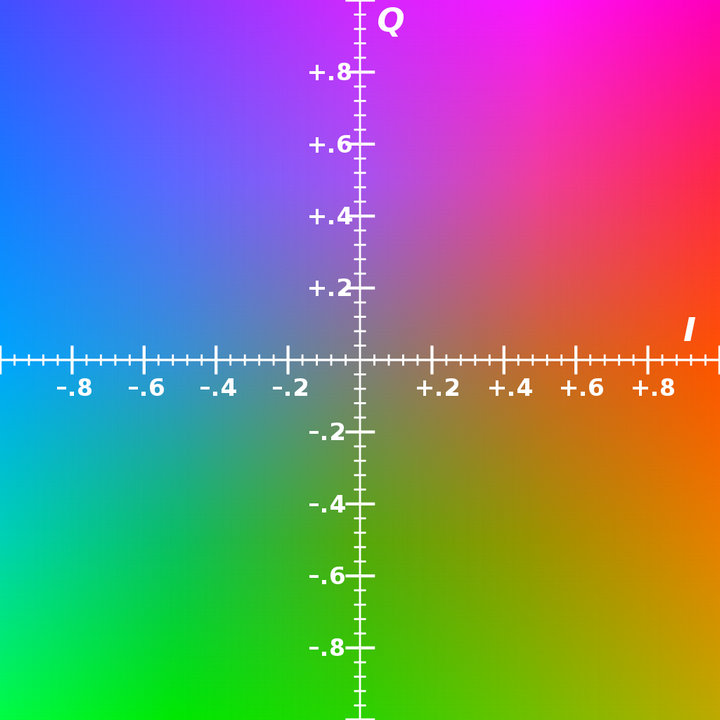 YIQ is the color space used by the NTSC color TV system, employed mainly in North and Central America, and Japan. I stands for in-phase, while Q stands for quadrature, referring to the components used in quadrature amplitude modulation. Some forms of NTSC now use the YUV color space, which is also used by other systems such as PAL.

The Y component represents the luma information, and is the only component used by black-and-white television receivers. I and Q represent the chrominance information. In YUV, the U and V components can be thought of as X and Y coordinates within the color space. I and Q can be thought of as a second pair of axes on the same graph, rotated 33°; therefore IQ and UV represent different coordinate systems on the same plane.

The YIQ system is intended to take advantage of human color-response characteristics. The eye is more sensitive to changes in the orange-blue (I) range than in the purple-green range (Q) — therefore less bandwidth is required for Q than for I. Broadcast NTSC limits I to 1.3 MHz and Q to 0.4 MHz. I and Q are frequency interleaved into the 4 MHz Y signal, which keeps the bandwidth of the overall signal down to 4.2 MHz. In YUV systems, since U and V both contain information in the orange-blue range, both components must be given the same amount of bandwidth as I to achieve similar color fidelity.

Very few television sets perform true I and Q decoding, due to the high costs of such an implementation. Compared to the cheaper R-Y and B-Y decoding which requires only one filter, I and Q each requires a different filter to satisfy the bandwidth differences between I and Q. These bandwidth differences also require that the ‘I’ filter include a time delay to match the longer delay of the ‘Q’ filter. The Rockwell Modular Digital Radio (MDR) was one I and Q decoding set, which in 1997 could operate in frame-at-a-time mode with a PC or in realtime with the Fast IQ Processor (FIQP). Some RCA “Colortrak” home TV receivers made circa 1985 not only used I/Q decoding, but also advertised its benefits along with its comb filtering benefits as full “100 percent processing” to deliver more of the original color picture content. Earlier, more than one brand of color TV (RCA, Arvin) used I/Q decoding in the 1954 or 1955 model year on models utilizing screens about 13 inches (measured diagonally). The original Advent projection television used I/Q decoding. Around 1990, at least one manufacturer (Ikegami) of professional studio picture monitors advertised I/Q decoding.

Formulas
These formulas approximate the conversion between the RGB color space and YIQ for a non-FCC version of NTSC.

From RGB to YIQ

From YIQ to RGB

in matrix notation, that equation system is written as:

is the gamma-corrected voltage of luma.

are the gamma-corrected voltages corresponding to red, green, and blue signals.

are the amplitudes of the orthogonal components of the chrominance signal.

To convert from FCC YIQ to RGB:

Phase-out
For broadcasting in the United States, it is currently in use only for low-power television stations, as full-power analog transmission was ended by the Federal Communications Commission (FCC) on 12 June 2009. It is still federally mandated for these transmissions as shown in this excerpt of the current FCC rules and regulations part 73 “TV transmission standard”: