Yangzhou paper cuts
Chinese paper-cuts fall into two categories roughly based on artistic styles, namely, the northern and the southern. The renowned Chinese scholar Mr. Guo Moruo (1892-1978 AD) once composed a poem applauding the fabulous paper-cut art, which means, “I once saw the paper cuts from North China and was amazed by their innocent and genuine beauty; Now I see the paper cut-outs from South China and am fascinated by their exquisite and elegant charm; This is an ingenious folk craftsmanship created simply by a pair of scissors; May its charm last forever.” With their delicate, lively and elegant beauty, Yangzhou paper cuts have evolved into the masterpieces of the paper cut art in South China. 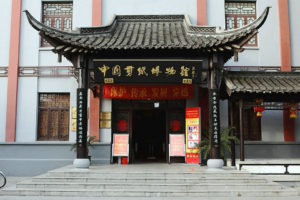 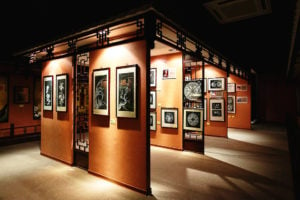 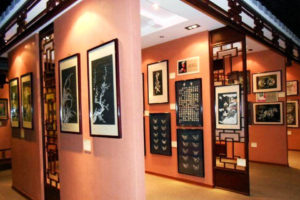 History
During the reigns of Emperor Jiaqing and Emperor Daoguang in the Qing dynasty (1644-1912 AD), a man of letters named Bao Jun born in Yangzhou of China’s Jiangnan area created a distinctive form of art later known as “cut-paper painting by Bao Jun”, which features diverse themes including landscapes, figures, birds, flowers, insects, fish, etc. based on his integration of paper-cutting and painting. The techniques of Bao’s “cut-paper painting” have unfortunately been lost, as neither artists like him nor artworks similar to those of his have appeared ever since.

The “cut-paper painting” by Bao Jun, as a distinctive category that marked an important stage in the development of the Yangzhou paper-cut art of the Qing dynasty (1644-1912 AD), count as the masterpiece of the literati paper-cuts for that it has not only inherited the literati characters of the preceding paper cut-outs by Bao Zhuangxing, but also integrated multiple art forms including poetry, calligraphy, painting, printing, cutting and pasting.

While unable to tell at first glance whether these are paintings, calligraphies or paper-cuts as the artist had integrated paper-cutting, painting, calligraphy and seals.

The viewers would find out after careful observation that these pieces must have been done by the creator first cutting shapes of flowers, birds, plants, insects, characters and seals from sheets of paper, then pasting them onto rice paper and finally rendering and adding supplemental brushwork similar to the texture strokes in Chinese painting.

With a solid foundation in the fields of painting and calligraphy as well as adept skills of paper-cutting, Bao Jun was able to combine painting and paper-cuts innovatively, creating a series of fascinating “cut-paper paintings” of landscapes, birds and flowers, plants and insects, figures, among which those with the theme of birds and flowers as well as plants and insects are the most brilliant.

The “cut-paper painting” demands experienced skills of collaging and pasting. These skills of Bao Jun were so ingenious that some staff of the museum who didn’t believe that the pieces in the Album of Plants and Insects were made of cut-paper even broke the museum rules to touch these cultural relics and were fully convinced and amazed when they saw the slightly curled corners of the cut-paper.

With scissors as the main tool and brush as the supplemental, Bao Jun created artworks that are still fascinating one century later to the viewers in the present day based on his incomparable cutting skills and ingenious brushwork.

His artworks, conveying both characters and interests of the literati, allow the viewers not only to study his ingenious artistic skills, but also to get a look at the inner world of the artist.

With pieces bearing his unique cultural connotations, Bao Jun established a direct link between objective sceneries and their artistic images the latter of which became the carrier for his inner emotions.

On his artworks Bao Jun usually left the signature of “Bao Jun from Baisha (White Sand)” or the seal of “Baisha Ren (person from White Sand)”. According to Encyclopaedic Dictionary of Ancient and Modern Chinese Geographical Names, Baisha was a prefecture known for white sand located in Yizheng county of China’s eastern Jiangsu province. And since Baisha prefecture was under jurisdiction of Yangzhou during the Qing dynasty, Bao Jun was referred to as a native of Yangzhou by Chen Wenshu in his New Recordings of the Painters Circle, actually a native of Yizheng county of Yangzhou to be specific.

There are two pieces (series) of artworks by Bao Jun now housed in Tianjin Museum, one of which was created in 1834, the 14th year during Emperor Daoguang’s reign while the other in 1837, namely, the 17th year.

Arahants by Bao Baisha, owned by Xuzhou-based collector Guo Junquan, features arahants illustrated in a life-like manner with refined, flowing lines. The scissor works in the paintings, calligraphies and seals, though might as thin as nothing, convey profound meanings.

Exhibits
Orioles and Desert Roses, paper cut-out by Zhao Hongmei
This piece illustrates an idyllic spring scene so beautiful that it seems to only exist in dreams. Desert roses start to bloom in the warm spring breeze. The most spectacular among these flowers are the two charming red blossoms, with petals waving in the gentle wind. The green leaves, seemingly insignificant, are the important elements that serve as a foil to the refined, elegant beauty of the flowers. The orioles are reluctant to leave the branch, singing beautiful songs.

The China Paper-cutting Museum (Chinese: 中国剪纸博物馆) is located in the back garden of Wang’s Xiaoyuan, a historic district in Yangzhou. The museum displays a variety of styles of paper-cutting art from all over the country, and regularly holds the national paper-cut works “Shanhua Award” and related cultural exchange activities. The museum has collected more than 400 pieces of paper-cutting masterpieces from various genres across the country. The original site of the Chinese Paper-cutting Museum is located in Mazhan Lane, Yangzhou City, and has now been relocated to the Arts and Crafts Building.