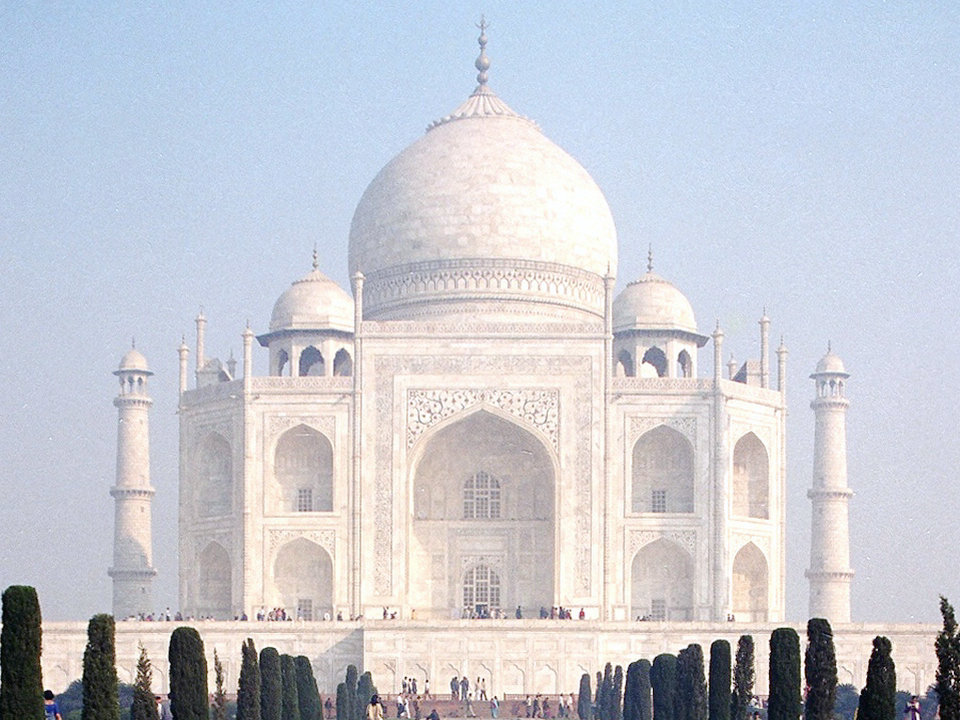 White color in history and art

White is the lightest color and is achromatic (having no hue), because it fully reflects and scatters all the visible wavelengths of light. It is the color of fresh snow, chalk, and milk, and is the opposite of black.

In ancient Egypt and ancient Rome, priestesses wore white as a symbol of purity, and Romans wore a white toga as a symbol of citizenship. In the Middle Ages and Renaissance a white unicorn symbolized chastity, and a white lamb sacrifice and purity. It was the royal color of the Kings of France, and of the monarchist movement that opposed the Bolsheviks during the Russian Civil War (1917–1922). Greek and Roman temples were faced with white marble, and beginning in the 18th century, with the advent of neoclassical architecture, white became the most common color of new churches, capitols and other government buildings, especially in the United States. It was also widely used in 20th century modern architecture as a symbol of modernity and simplicity.

According to surveys in Europe and the United States, white is the color most often associated with perfection, the good, honesty, cleanliness, the beginning, the new, neutrality, and exactitude. White is an important color for almost all world religions. The Pope, the head of the Roman Catholic Church, has worn white since 1566, as a symbol of purity and sacrifice. In Islam, and in the Shinto religion of Japan, it is worn by pilgrims; and by the Brahmins in India. In Western cultures and in Japan, white is the most common color for wedding dresses, symbolizing purity and virginity. In many Asian cultures, white is also the color of mourning.

Prehistoric history
White was one of the first colors used in art. The Lascaux Cave in France contains drawings of bulls and other animals drawn by paleolithic artists between 18,000 and 17,000 years ago. Paleolithic artists used calcite or chalk; they sometimes as a background, sometimes as a highlight, along with charcoal and red and yellow ochre in their vivid cave paintings.

Ancient history
In ancient Egypt, white was connected with the goddess Isis. The priests and priestesses of Isis dressed only in white linen, and it was used to wrap mummies.

In Greece and other ancient civilizations, white was often associated with mother’s milk. In Greek mythology, the chief god Zeus was nourished at the breast of the nymph Amalthea. In the Talmud, milk was one of four sacred substances, along with wine, honey, and the rose.

The ancient Greeks saw the world in terms of darkness and light, so white was a fundamental color. According to Pliny the Elder in his Natural History, Apelles (4th century BC) and the other famous painters of ancient Greece used only four colors in their paintings; white, red, yellow and black; For painting, the Greeks used lead white, made by a long and laborious process.

A plain white toga, known as a toga virilis, was worn for ceremonial occasions by all Roman citizens over the age of 14–18. Magistrates and certain priests wore a toga praetexta, with a broad purple stripe. In the time of the Emperor Augustus, no Roman man was allowed to appear in the Roman forum without a toga.

In ancient Rome, the priestesses of the goddess Vesta dressed in white linen robes, a white palla or shawl, and a white veil. They protected the sacred fire and the penates of Rome. White symbolized their purity, loyalty, and chastity.

Postclassical history art, the white lamb became the symbol of the sacrifice of Christ on behalf of mankind. John the Baptist described Christ as the lamb of God, who took the sins of the world upon himself. The white lamb was the center of one of the most famous paintings of the Medieval period, the Ghent Altarpiece by Jan van Eyck.

White was also the symbolic color of the transfiguration. The Gospel of Saint Mark describes Jesus’ clothing in this event as “shining, exceeding white as snow.” Artists such as Fra Angelico used their greatest skill to capture the whiteness of his garments. In his painting of the transfiguration at the Convent of Saint Mark in Florence, Fra Angelico emphasized the white garment by using a light gold background, placed in an almond-shaped halo.

The white unicorn was a common subject of Postclassical history manuscripts, paintings and tapestries. It was a symbol of purity, chastity and grace, which could only be captured by a virgin. It was often portrayed in the lap of the Virgin Mary.

During the Postclassical history, painters rarely ever mixed colors; but in the Renaissance, the influential humanist and scholar Leon Battista Alberti encouraged artists to add white to their colors to make them lighter, brighter, and to add hilaritas, or gaiety. Many painters followed his advice, and the palette of the Renaissance was considerably brighter.

Early Modern Era
In the Early Modern Era, white was commonly worn by widows as a color of mourning. The widows of the kings of France wore white until Anne of Brittany in the 16th century. A white tunic was also worn by many knights, along with a red cloak, which showed the knights were willing to give their blood for the king or Church.

Late Modern Era
18th and 19th centuries
White was the dominant color of architectural interiors in the Baroque period and especially the Rococo style that followed it in the 18th century. Church interiors were designed to show the power, glory and wealth of the church. They seemed to be alive, filled with curves, asymmetry, mirrors, gilding, statuary and reliefs, unified by white.

White was also a fashionable color for both men and women in the 18th century. Men in the aristocracy and upper classes wore powdered white wigs and white stockings, and women wore elaborate embroidered white and pastel gowns.

After the French Revolution, a more austere white (blanc cassé) became the most fashionable color in women’s costumes which were modeled after the outfits of Ancient Greece and Republican Rome. Because of the rather revealing design of these dresses, the ladies wearing them were called les merveilleuses (the marvellous) by French men of that era. The Empire style under Emperor Napoléon I was modeled after the more conservative outfits of Ancient Imperial Rome. The dresses were high in fashion but low in warmth considering the more severe weather conditions of northern France; in 1814 the former wife of Napoleon, Joséphine de Beauharnais, caught pneumonia and died after taking a walk in the cold night air with Tsar Alexander I of Russia.

White was the universal color of both men and women’s underwear and of sheets in the 18th and 19th centuries. It was unthinkable to have sheets or underwear of any other color. The reason was simple; the manner of washing linen in boiling water caused colors to fade. When linen was worn out, it was collected and turned into high-quality paper.

The 19th-century American painter James McNeill Whistler (1834–1903), working at the same time as the French impressionists, created a series of paintings with musical titles where he used color to create moods, the way composers used music. His painting “Symphony in White No. 1 – The White Girl”, which used his mistress Joanna Hiffernan as a model, used delicate colors to portray innocence and fragility, and a moment of uncertainty.

20th and 21st centuries
The White movement was the opposition that formed against the Bolsheviks during the Russian Civil War, which followed the Russian Revolution in 1917. It was finally defeated by the Bolsheviks in 1921–22, and many of its members emigrated to Europe.

At the end of the 19th century, lead white was still the most popular pigment; but between 1916 and 1918, chemical companies in Norway and the United States began to produce titanium white, made from titanium oxide. It had first been identified in the 18th century by the German chemist Martin Klaproth, who also discovered uranium. It had twice the covering power of lead white, and was the brightest white pigment known. By 1945, 80 percent of the white pigments sold were titanium white.

The absoluteness of white appealed to modernist painters. It was used in its simplest form by the Russian suprematist painter Kazimir Malevich in his 1917 painting ‘the white square,’ the companion to his earlier ‘black square.’ It was also used by the Dutch modernist painter Piet Mondrian. His most famous paintings consisted of a pure white canvas with grid of vertical and horizontal black lines and rectangles of primary colors.

Black and white also appealed to modernist architects, such as Le Corbusier (1887–1965). He said a house was “a machine for living in” and called for a “calm and powerful architecture” built of reinforced concrete and steel, without any ornament or frills. Almost all the buildings of contemporary architect Richard Meier, such as his museum in Rome to house the ancient Roman Ara Pacis, or Altar of Peace, are stark white, in the tradition of Le Corbusier.