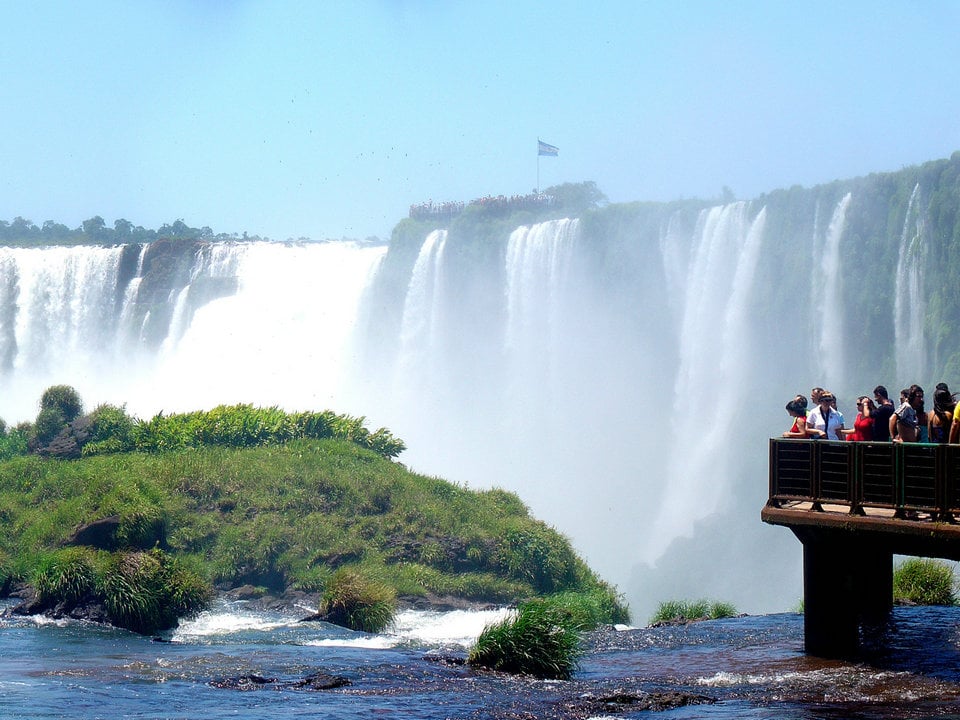 Waterfalls are some of the most spectacular sights that nature has to offer, and are the frequent goal of many travellers.

Formation
Waterfalls are commonly formed in the upper course of a river in steep mountains. Because of their landscape position, many waterfalls occur over bedrock fed by little contributing area, so may be ephemeral and flow only during rainstorms or significant snowmelt. The further downstream, the more perennial a waterfall can be. Waterfalls can have a wide range of widths and depths.

When the river courses over resistant bedrock, erosion happens slowly and is dominated by impacts of water-borne sediment on the rock, while downstream the erosion occurs more rapidly. As the watercourse increases its velocity at the edge of the waterfall, it may pluck material from the riverbed, if the bed is fractured or otherwise more erodible. Hydraulic jets and hydraulic jumps at the toe of a falls can generate large forces to erode the bed, especially when forces are amplified by water-borne sediment. Horseshoe-shaped falls focus the erosion to a central point, also enhancing riverbed change below a waterfalls. A process known as “potholing” involves local erosion of a potentially deep hole in bedrock due to turbulent whirlpools spinning stones around on the bed, drilling it out. Sand and stones carried by the watercourse therefore increase erosion capacity. This causes the waterfall to carve deeper into the bed and to recede upstream. Often over time, the waterfall will recede back to form a canyon or gorge downstream as it recedes upstream, and it will carve deeper into the ridge above it. The rate of retreat for a waterfall can be as high as one-and-a-half metres per year.

Often, the rock stratum just below the more resistant shelf will be of a softer type, meaning that undercutting due to splashback will occur here to form a shallow cave-like formation known as a rock shelter under and behind the waterfall. Eventually, the outcropping, more resistant cap rock will collapse under pressure to add blocks of rock to the base of the waterfall. These blocks of rock are then broken down into smaller boulders by attrition as they collide with each other, and they also erode the base of the waterfall by abrasion, creating a deep plunge pool in the gorge downstream.

Streams can become wider and shallower just above waterfalls due to flowing over the rock shelf, and there is usually a deep area just below the waterfall because of the kinetic energy of the water hitting the bottom. However, a study of waterfalls systematics reported that waterfalls can be wider or narrower above or below a falls, so almost anything is possible given the right geological and hydrological setting. Waterfalls normally form in a rocky area due to erosion. After a long period of being fully formed, the water falling off the ledge will retreat, causing a horizontal pit parallel to the waterfall wall. Eventually, as the pit grows deeper, the waterfall collapses to be replaced by a steeply sloping stretch of river bed. In addition to gradual processes such as erosion, earth movement caused by earthquakes or landslides or volcanoes can cause a differential in land heights which interfere with the natural course of a water flow, and result in waterfalls.

A river sometimes flows over a large step in the rocks that may have been formed by a fault line. Waterfalls can occur along the edge of a glacial trough, where a stream or river flowing into a glacier continues to flow into a valley after the glacier has receded or melted. The large waterfalls in Yosemite Valley are examples of this phenomenon, which is referred to as a hanging valley. Another reason hanging valleys may form is where two rivers join and one is flowing faster than the other.

Waterfalls can be grouped into ten broad classes based on the average volume of water present on the fall (which depends on both the waterfall’s average flow and its height) using a logarithmic scale. Class 10 waterfalls include Niagara Falls, Paulo Afonso Falls and Khone Falls.

Oscar von Engeln (1930s) Published “Geomorphology: systematic and regional”, this book had a whole chapter devoted to waterfalls, and is one of the earliest examples of published works on waterfalls.

R. W. Young (1980s) Wrote “Waterfalls: form and process” this work made waterfalls a much more serious topic for research for modern Geoscientists.

Plunge: Fast-moving water descends vertically, losing complete contact with the bedrock surface. The contact is typically lost due to horizontal velocity of the water before it falls. It always starts from a narrow stream. (e.g. Angel Falls)
Punchbowl: Water descends in a constricted form and then spreads out in a wider pool. (e.g. Punch Bowl Falls)

Cascade: Water descends a series of rock steps. (e.g. Numa Falls)
Tiered/Multi-step/Staircase: A series of waterfalls one after another of roughly the same size each with its own sunken plunge pool. (e.g. Ebor Falls)
Cataract: A large, powerful waterfall. (e.g. Victoria Falls)
Segmented: Distinctly separate flows of water form as it descends.
Frozen: Any waterfall which has some element of ice or snow.
Moulin: A moulin is a waterfall in a glacier.

Some waterfalls are also distinct in that they do not flow continuously. Ephemeral waterfalls only flow after a rain or a significant snowmelt.

Notable waterfalls
Some of the most noteworthy waterfalls are:

Victoria Falls, on the border between Zambia and Zimbabwe, forms the largest single face of falling water in the world, with a width of 1.7 kilometers and height of 108 meters.
Angel Falls in Venezuela is the world’s highest waterfall with one uninterrupted drop of 807 m (2,647 ft), from a total height of 978 m (3,212 ft)
Iguaçu Falls on the border of Brazil and Argentina, are one of the largest and most impressive in the world.
Boyoma Falls (formerly, Stanley Falls) on the Congo River in the Democratic Republic of the Congo are the falls that have the greatest volume of flow – 17 million litres per second over a drop of 60 m
Niagara Falls, the most-visited waterfall in the world, on the border between Canada and the United States of America

Congo
Boyoma Falls (formerly, Stanley Falls) on the Congo River are the falls with the greatest volume of flow – 17 million litres per second over a drop of 60 m

South Africa
Tugela Falls in the Drakensberg is the worlds second highest waterfall with a total drop of 947m in 5 leaps. The highest single drop is 411m.

China
China’s largest waterfall, the Huangguoshu Waterfall is one of few waterfalls that can be viewed from above, below, front, back, left and right in the world. It is near Anshun in Guizhou.

Iran
Shevi Waterfall is one of the most beautiful waterfalls in Iran with a height of about 85 m.

Japan
Kegon Falls in Chuzenji Famed for its beauty and morbidity as an inspired suicide spot after a poet wrote a suicide note here before jumping off the falls.
Nachi Falls in Katsuura Arguably the nation’s most famous waterfall, it is over 100 feet and serves as a gorgeous backdrop to Kumano Nachi Shrine. The shrine was built here because of the falls, which is believed to house a water spirit.

Singapore
Jurong Falls is the tallest artificial waterfall in the world at 30m.

Europe
Krimml waterfalls in Krimml, Austria (Salzburg region), Europe`s highest waterfalls
Rhine Falls in Schaffhausen, Switzerland, Europe’s largest falls by volume of water
Savica Waterfall in Slovenia has two strands and is 78 meters high. France Prešeren’s epic poem “Baptism by the Savica” is one of the great works of Slovene literature.
Stora Sjöfallet in Laponia, Sweden, used to be one of Europe’s most impressive waterfalls, but most water is now led away for hydroelectric power

Norway
Norway has many high waterfalls.

Kjosfossen by the Flåm railway, with a total fall of around 225 metres.
Mardalsfossen in Nesset in Møre og Romsdal, with a total fall of 705 metres.
Rjukan by the namesake village, was an important tourist attraction until built out for hydro power, now a sight at some occasions.
Vettisfossen in Årdal by Jotunheimen is the highest free falling unregulated waterfall in northern Europe, with a free fall of 273 m.

Stay safe
A liter of water weighs a kilogram; a gallon weighs ten pounds. When large amounts of water fall long distances, the forces involved are enormous, easily enough to kill a person or sink a boat.

Due to the spray, it is often very slippery around the waterfalls. For this reason, it is advisable, especially on the upper edge, not to venture too far to avoid crashes.

Therefore, it is advisable to follow the local warnings and not to override prohibitions. Do not exceed barriers, these are most appropriate for your own protection.