The White House is the official residence and workplace of the President of the United States. It is located at 1600 Pennsylvania Avenue NW in Washington, D.C., and has been the residence of every U.S. president since John Adams in 1800. The term White House is often used as a metonym for the president and his advisers, as in “The White House announced that…”.

The residence was designed by Irish-born architect James Hoban in the neoclassical style. Construction took place between 1792 and 1800 using Aquia Creek sandstone painted white. When Thomas Jefferson moved into the house in 1801, he (with architect Benjamin Henry Latrobe) added low colonnades on each wing that concealed stables and storage. In 1814, during the War of 1812, the mansion was set ablaze by the British Army in the Burning of Washington, destroying the interior and charring much of the exterior. Reconstruction began almost immediately, and President James Monroe moved into the partially reconstructed Executive Residence in October 1817. Exterior construction continued with the addition of the semi-circular South portico in 1824 and the North portico in 1829. 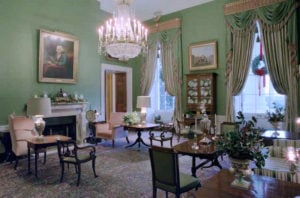 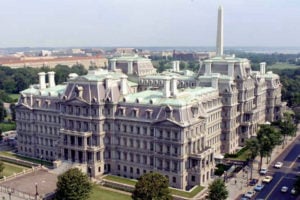 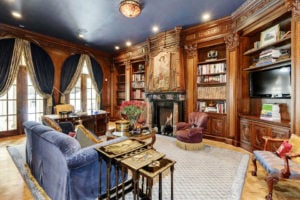 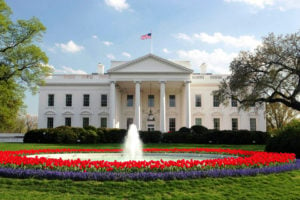 Because of crowding within the executive mansion itself, President Theodore Roosevelt had all work offices relocated to the newly constructed West Wing in 1901. Eight years later in 1909, President William Howard Taft expanded the West Wing and created the first Oval Office, which was eventually moved as the section was expanded. In the main mansion, the third-floor attic was converted to living quarters in 1927 by augmenting the existing hip roof with long shed dormers. A newly constructed East Wing was used as a reception area for social events; Jefferson’s colonnades connected the new wings. East Wing alterations were completed in 1946, creating additional office space. By 1948, the residence’s load-bearing exterior walls and internal wood beams were found to be close to failure. Under Harry S. Truman, the interior rooms were completely dismantled and a new internal load-bearing steel frame constructed inside the walls. Once this work was completed, the interior rooms were rebuilt.

The modern-day White House complex includes the Executive Residence, West Wing, East Wing, the Eisenhower Executive Office Building—the former State Department, which now houses offices for the President’s staff and the Vice President—and Blair House, a guest residence. The Executive Residence is made up of six stories—the Ground Floor, State Floor, Second Floor, and Third Floor, as well as a two-story basement. The property is a National Heritage Site owned by the National Park Service and is part of the President’s Park. In 2007, it was ranked second on the American Institute of Architects list of “America’s Favorite Architecture”.

Our first president, George Washington, selected the site for the White House in 1791. The cornerstone was laid in 1792 and a competition design submitted by Irish-born architect James Hoban was chosen. After eight years of construction, President John Adams and his wife, Abigail, moved into the unfinished house in 1800. During the War of 1812, the British set fire to the President’s House in 1814. James Hoban was appointed to rebuild the house, and President James Monroe moved into the building in 1817. During Monroe’s administration, the South Portico was constructed in 1824, and Andrew Jackson oversaw the addition of the North Portico in 1829. During the late 19th century, various proposals were made to significantly expand the President’s House or to build an entirely new house for the president, but these plans were never realized.

In 1902, President Theodore Roosevelt began a major renovation of the White House, including the relocation of the president’s offices from the Second Floor of the Residence to the newly constructed temporary Executive Office Building (now known as the West Wing). The Roosevelt renovation was planned and carried out by the famous New York architectural firm McKim, Mead and White. Roosevelt’s successor, President William Howard Taft, had the Oval Office constructed within an enlarged office wing.

Less than fifty years after the Roosevelt renovation, the White House was showing signs of serious structural weakness. President Harry S. Truman began a renovation of the building in which everything but the outer walls were dismantled. The reconstruction was overseen by architect Lorenzo Winslow, and the Truman family moved back into the White House in 1952.

Every president since John Adams has occupied the White House, and the history of this building extends far beyond the construction of its walls. From the Ground Floor Corridor rooms, transformed from their early use as service areas, to the State Floor rooms, where countless leaders and dignitaries have been entertained, the White House is both the home of the President of the United States his family and a museum of American history. The White House is a place where history continues to unfold.

Public access and security
Like the English and Irish country houses it was modeled on, the White House was, from the start, open to the public until the early part of the 20th century. President Thomas Jefferson held an open house for his second inaugural in 1805, and many of the people at his swearing-in ceremony at the Capitol followed him home, where he greeted them in the Blue Room. Those open houses sometimes became rowdy: in 1829, President Andrew Jackson had to leave for a hotel when roughly 20,000 citizens celebrated his inauguration inside the White House. His aides ultimately had to lure the mob outside with washtubs filled with a potent cocktail of orange juice and whiskey. Even so, the practice continued until 1885, when newly elected Grover Cleveland arranged for a presidential review of the troops from a grandstand in front of the White House instead of the traditional open house. Jefferson also permitted public tours of his house, which have continued ever since, except during wartime, and began the tradition of annual receptions on New Year’s Day and on the Fourth of July. Those receptions ended in the early 1930s, although President Bill Clinton briefly revived the New Year’s Day open house in his first term.

The White House remained accessible in other ways; President Abraham Lincoln complained that he was constantly beleaguered by job seekers waiting to ask him for political appointments or other favors, or eccentric dispensers of advice like “General” Daniel Pratt, as he began the business day. Lincoln put up with the annoyance rather than risk alienating some associate or friend of a powerful politician or opinion maker.

NASAMS (Norwegian Advanced Surface to Air Missile System) were used to guard air space over Washington, D.C. during the 2005 presidential inauguration. The same NASAMS units have since been used to protect the president and all air space around the White House, which is strictly prohibited to aircraft.