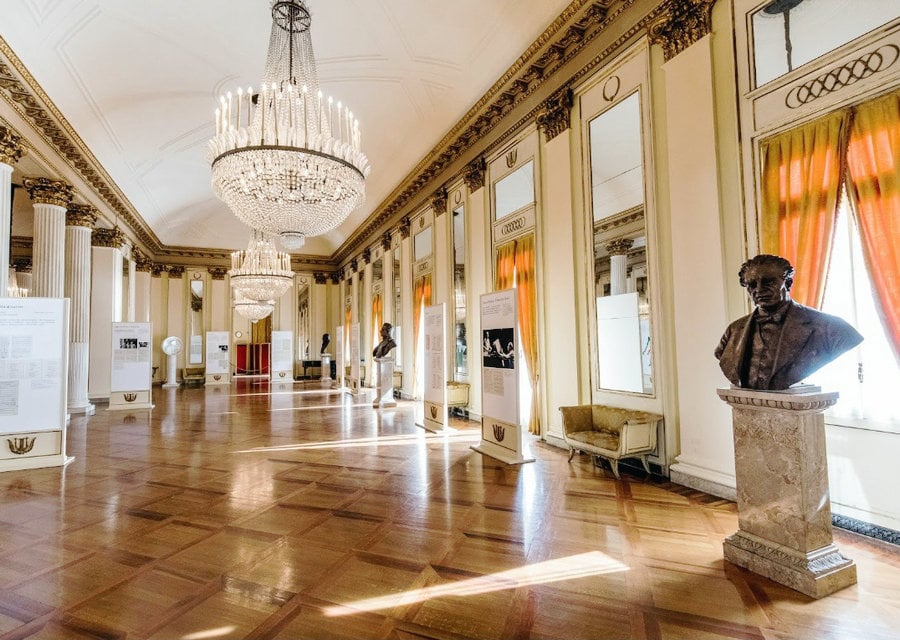 The neoclassical decoration and the same arrangement of the rooms on the ground floor are not those foreseen by Piermarini. Originally, after passing a narrow corridor parallel to the facade, similar to the current one, there were access to two oblong rooms. On the external side of the one on the left were the “ticket room”, the “room for businessmen” with the adjoining “room for agreements”, the custodian’s room. On the external side of the one on the right, the room for the guardhouse with the “dressing room for the officer” and the “coffee shop” for the stalls. In the center, a transit room where the public waited for the carriages to arrive. Having walked the two corridors to the end, one entered the atrium, or “vestibule for the servants”, oblong and not very wide, and finally, through three doors, into the hall.

Between 1881 and 1884 the decorations of these rooms were renewed following the ornate designs envisaged in a project from 1862 by the architects Savoia and Pirola. Today, having crossed the threshold of one of the five central doors (the two lateral ones give access to as many smaller rooms obtained in the bodies added in 1835 ), you enter a room, covered by a barrel vault, as long as the original projecting body of the facade, very narrow and low. From here as many doors lead into the foyerof the stalls and the stages. The environment is divided, parallel to the facade, by a row of six tall marble columns. The walls are decorated in stucco with pilasters that support friezes and a rich, partially gilded entablature. Several mirrors reflect the light of the crystal chandeliers hanging from the vaults.

On the bottom, the large central passage gives access, via a short ramp divided into two columns, to the stalls. On the right and left, two pairs of smaller openings lead via some steps to the corridors of the boxes (the central ones) and to the wardrobes of the stalls (the lateral ones). In the side walls of the atrium four doors open: the first communicating on the right and left, respectively, with the spectators’ buffet of the audience, and with the bookshop, while the second with the “mirror stairs” that give direct access to the reduced of stages and galleries.

The Facade
The characteristic architectural elements are the tympanum, the pilasters and the semi-columns visible when the theater stood on a long and narrow street, subsequently, after the construction of the square in front, they become less evident, since the angular perspective gives way to the central point of view. With projecting porch and terrace, the theater is a functional construction with an internal hemicycle for the diffusion of sounds. The stylistic features of Piermarini can be summarized in the sobriety of the structure and of the decorative elements used with modular relationships.

The main facade is the part of the theater that has undergone the least number of changes compared to the original project. The only addition was that of the two small lateral bodies surmounted by terraces (1835), which, if they slightly alter the lateral vision by breaking the scan of the three different volumes of the facade, save the frontal perception. The most innovative aspect of the project is certainly the gallery that the architect places before the entrances of the theater. Once it was possible, thanks to this arrangement, to arrive a few meters from the entrance, and under cover, with the carriage. The floors are marked by cornices and by the different wall covering. On the ground floor and mezzanine, on a rusticated baseseven blind arches open, plastered as light as the surfaces of the upper floors. Originally there were only two access doors to the theater, in correspondence with the side arches of the gallery. Within the other five openings, however, as many windows opened. Today, each arch has a gate topped by the arched windows of the mezzanine. In correspondence of the piers of the arches runs a course of more protruding blocks. Protruding is also the ashlar.

Above the gallery and the bodies added by Pestagalli, a balustrade parapet, whose design is also taken up as a base for the half-columns and the Corinthian pilasters that mark the rhythm of the different volumes on the first floor. At the terrace, in the middle of the four pairs of half-columns, three gabled doors open. On the wall of the intermediate volume and on the side terraces there are four other lights, always decorated with triangular gables, two on the right and two on the left. At the capitals there is a frieze broken in stucco festoons. Above is an important entablature on which the bases of the low pilasters and the frames of the openings of today’s reduced galleries rest.

The prospect, in correspondence with the gallery of carriages, is crowned by a decorated tympanum, again on a design by Piermarini, in stucco bas – relief by Giuseppe Franchi. The subject is the allegory of the chariot of the Sun chased by Night (elsewhere said the chariot of Apollo or of Phaeton ). On both sides a balustrade interrupted, in correspondence with the underlying pilasters, by blind parapets decorated with flamed vases.

Bavarian granite, gray-pink in color, was chosen for the ashlar; for the parapets, the plinth on the first floor, the pilasters, the columns, the entablature that runs on them, the gables of all the windows and the frame of the large triangular gable, the Viggiù stone, a straw-colored sandstone, and the Hen stone.

The architect conceived the main facade for a foreshortened view, since the theater was originally located in a relatively narrow district. The frontal view, and the curious effect of the tympanum surmounted by pantiles, was made possible following the opening of Piazza della Scala in 1857.

Terrace and restoration
In May 2002 the renovation project was presented, now no longer postponable: even without considering the logistical difficulties of the backstage, the theater had been operating for almost ten years now in derogation of the safety regulations on fire prevention and accident prevention. The project is, in fact, already foreshadowed in the 1990s, but finds concrete realization only at the beginning of the following decade. There were two possible roads: the simple implementation of the structure and the maintenance of the structure as returned by the 1947 restoration, or the more ambitious reconstruction of the stage and of the other rooms used by the artists, in order to guarantee an enhancement of the stage machine. The second was chosen, and the decision was not without criticism: such a profound intervention in fact erased the tangible signs that time and people passing through those environments had left.

The scenic machine and the architectural project
The scenic machine project was entrusted to Franco Malgrande, the architect Mario Botta, who took over from Giuliano Parmegiani, instead signed the project of the scenic tower, the elliptical tower and the service areas housed in the buildings behind the Casino Ricordi, in via Filodrammatici.

From the beginning of the works, some difficulties arose: the central position of the theater prevented any reliance on the space around it and made careful planning, particular coordination and safety monitoring necessary. The four hundred workers and various technicians therefore operated within the limited work enclosure, from which 120,000 m³ of rubble were removed in at least 10,000 journeys of the work vehicles.

Botta’s choices have also been the subject of heated debate, especially regarding the aesthetic impact of the two new, massive volumes (the scenic and elliptical towers).

The scenic tower rises behind the turrets of the ancient fire-fighting system, in line with the axis of the facade. The covering is in Botticino marble slabs arranged in triple rows of larger courses interspersed with thinner lists. Among the latter there are various LEDs that evoke the presence of the tower at night. The height of the new stage tower coincides with the previous one and, as the architect said, the new volumes are set back “with the double intention of highlighting the historical facades in the ‘figurative’ relationship with the urban fabric and offering, above of existing roofs, an abstract language for new buildings in order to separate and highlight the different historical periods ».

In fact, it was decided to withdraw the east front of the tower by a few meters, so as to be able to reopen the darkened lights with the construction of the old wall against the stage tower and the system of shots and counterweights attached to it. In this space, a series of paths have now been created behind the front on Via Verdi, which allow you to reopen the windows and give life to the historic facade. The north front, opposite Piazza della Scala, is instead furrowed by deep window engravings, open to give light to the four rehearsal rooms located above the backstage. This front is completed by two deeper and wider recesses, in correspondence of the two bodies of stairs, and by the system of openings of the fitting room body which connects the elliptical tower to the rear tower.

The object of the intervention was also the interior of the nineteenth-century buildings in via dei Filodrammatici, the ancient Royal Casino, rebuilt from the foundations, keeping only the facades and uniforming the pitched roofs. In place of the two previous courts, a single space opens today between the side of the Piermarin building and the street side, overlooked by the rooms of the superintendence and the artistic direction. The small courtyard, which develops parallel to the portico of via Filodrammatici, is dominated by the overhang of the elliptical body which rises five floors higher. A single vertical opening opens under the overhang, giving light to the landings of the stairs and lifts that disengage the offices on the lower floors of the changing rooms of the artists and staff.

Parallel to the axis of the Piermarinian project, in fact, there is a new elliptical plan volume hosting the artists’ dressing rooms. The significant setback and the absence of a real front are intended precisely to underline the detachment from the historical facades of the Casino Ricordi and other buildings. The presence of the elliptical tower appears even more discreet by virtue of the vertical elements in botticino, which “make it vibrate in the play of light and shadow created by the sun, dematerializing its surfaces”.

Botta wanted to emphasize that, at the time of Piermarini, the block was enclosed between narrow streets. The depth offered to our eye is due to the demolition, in 1858, of the buildings facing via Manzoni, an urban condition unknown to the architect from Foligno and which justifies the construction of the new volumes. This depth allows, according to the Swiss architect, to understand the different languages that range from the eighteenth century to the present within the larger architectural complex.

The works have therefore optimized the service environments and given the theater one of the most complex and versatile scenic machines ever designed, however, in the face of decidedly invasive interventions against the ancient scenic structures and the Small Scale, which have been lost forever.

La Scala Theatre was founded in 1778 and soon became the home of the great Italian composers: Rossini, Bellini, Donizetti, Verdi and Puccini are just some of the musicians who presented the premieres of their operas here.

La Scala’s opening season is the world’s most famous opera night, broadcast to all continents and celebrated by a festival that fills the streets of Milan for weeks. La Scala’s tours have touched five continents and are the most effective ambassador of Italian culture in the world. Today La Scala is waiting to resume its activities: in 2019 it welcomed an audience of over 400,000.