The petit appartement de la reine is a suite of rooms that were reserved for the personal use of the queen. Originally arranged for the use of the Marie-Thérèse, consort of Louis XIV, the rooms were later modified for use by Marie Leszczyńska and finally for Marie-Antoinette. The Queen’s apartments and the King’s Apartments were laid out on the same design, each suite having seven rooms. Both suites had ceilings painted with scenes from mythology; the King’s ceilings featured male figures, the Queen’s featured females.

Overlooking the parterre du Midi, the Queen’s Grand Apartment is symmetrical to the Grand Appartement du Roi. But unlike the sovereign who, from the reign of Louis XIV, forsook his Grand Apartment, the Queen continued to occupy his own, which explains the decor was modified several times during the XVIII th century. 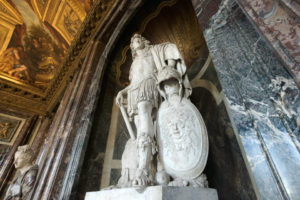 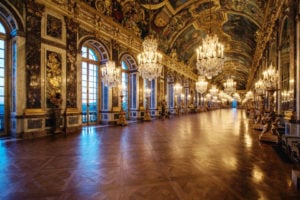 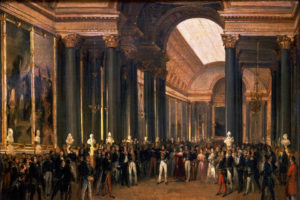 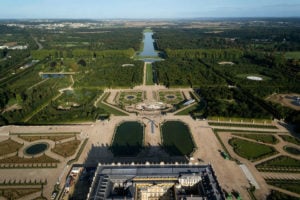 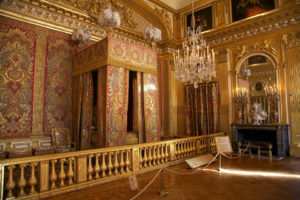 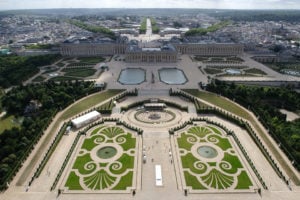 The room is the main room of the apartment. The queen slept there, often joined by the king, and granted her private audiences. Two queens (Marie-Therese of Austria and Marie Leszczyńska) and two dauphines (Marie-Anne of Bavaria and Marie-Adélaïde de Savoie), died there, and nineteen children of France were born there.

The queen’s room
The room is the main room of the apartment, the one where the queen was most often. She slept there, often joined by the king. In the morning, she received during and after her toilet which constituted a court moment as regulated by etiquette as the Lever du roi. It was here that the public deliveries took place: nineteen “Enfants de France” were born there. The decor retains the memory of the three queens who occupied the room: the compartmentalization of the ceiling dates back to Queen Marie-Thérèse , but grisaille paintings by Boucher were made for Marie Leszczinskaas well as woodwork. All these elements were kept in the time of Marie Antoinette for which only the furniture and the fireplace were delivered nine.

During the invasion of the castle by the rioters on October 6, 1789, Marie-Antoinettemanaged to escape them by the small left door of the alcove opening on a corridor giving access to the Queen’s private cabinets, a dozen small rooms reserved for his private life and his service. During the Revolution, the castle was not looted, but its furniture was scattered during auctions that lasted a whole year. Some have been found, such as the Schwerdfeger jewelery clasp on the left of the bed, or the chimney screen; others have been replaced by equivalent parts: this is the case of the seats delivered in part for the Countess of Provence, sister-in-law of the Queen, and partly for the visit of the Swedish king Gustav III. As for the fabrics which stretch the bed and the walls, they were rewoven in Lyon according to the original preserved cards.

The noble salon
Anteroom under Queen Marie-Therese, it is in this room that Marie Leszczinska granted her solemn audiences, sitting under a canopy. She also held her circle there, as it was called this time of settled conversation with the ladies of the Court. Marie Antoinette had the decoration redone entirely, preserving only the paintings of the ceiling, and for her, the walls of apple-green damask bordered with a large gold braid were stretched out. New furniture was delivered, both extremely modern and refined. Indeed, for the majestic dressers and corners for this piece, Riesener, the Queen’s favorite cabinetmaker, sacrificed to the latest English fashion, abandoning her usual floral inlays for large mahogany platters, while the gilded bronzes and blue turquin marble shelves of this majestic ensemble were matched to those of the chimney, she also new.

The antechamber of the grand couvert
It was in the antechamber of the queen that the public meals took place, the sumptuous ritual of which attracted many people. Only the members of the royal family could sit at table and before them, sitting, the duchesses, princesses or holders of large offices having the privilege of the stool, then, standing, the other ladies and people who, by their rank or with the permission of the bailiffs, could have entered. Louis XIV. Compelled himself to this representation almost every evening; Louis XV often preferred intimate dinners; as for Louis XVIand to Marie Antoinette, a testimony of time tells us that “the Queen placed herself on the King’s left. They turned their backs to the fireplace. […] The King ate with good appetite, but the Queen did not take off her gloves and did not unfold her napkin, in which she was very wrong “. Against this boredom, Marie-Antoinette asked that there be always music at the Grand Couvert and to this end, a platform for the musicians was set up in the room.

The antechamber of the Grand Couvert of the Queen was restored in 2009-2010 thanks to a sponsorship of Martell & Co.

The guards room
At the entrance to the Queen’s staircase , also known as the “Marble Staircase,” the Queen’s Grand Apartment was entered through the Guards Hall, where, day and night, twelve bodyguards served the Sovereign. In Versailles, only the king, the queen and the dolphin could thus have a personal guard composed of soldiers belonging to these elite units that were the four companies of the Guards of the body of the King. The next big hall, now called ” Salle du Sacre “, was affected to them. It served as a guardhouse.

The Queen Guards room is the only room in the suite with the decor of the XVII th century has been preserved: the queen did not have the opportunity to stick to it, it never seemed necessary to modernize. This is why we still see the marble paneling characteristic of the first state of the Great Apartments and paintings, placed there in 1680, which come from the former Jupiter lounge , which became a war room .

“The service of the Gardes du corps, at the Castle, was to guard the doors of the apartments, to take up arms when the princes passed, to garnish the Chapel during the mass and to escort the dinners of the royal family. They had to know the dukes and peers, because, when they passed, the sentry had to carry arms and strike two shots of the right heel. In the same way, this sentry had to open the door and not let it open; but one feels that the guard was himself very comfortable that he should be exempted from all these functions. ”

It is here that on October 6, 1789 , at dawn, the assailants who came to claim bread from the king, tried to reach the Queen’s apartments, before a chambermaid prevented by a bodyguard locked the Grand Couvert door and advise the queen to escape. On their way back, the attackers attempted to enter the King’s Guards Hall.

Marie-Thérèse
At the completion of Le Vau’s enveloppe, Marie-Thérèse’s private area consisted of suite of five rooms that opened on the southern side of the cour de marbre and onto a small interior courtyard — at the time called the cour de la reine. In these rooms, Marie-Thérèse led her private and family life. Very little information survived about the décor or the arrangement of these rooms, owing largely to her early death in 1683 (Verlet 1985, p. 253).

The 1737-1739 phase saw significant redecoration in the petite galerie with a décor of paneling in green and gold vernis Martin. At this time, the appartement de nuit du duc de Bourgogne was remodeled for use by the queen with the construction of the grand cabinet intérieur (1740 plan #9) and the arrière cabinet (1740 plan #10), both of which were decorated with intricately carved and painted paneling. At this time, a number of paintings, most notably by François Boucher and Charles-Antoine Coypel, were displayed in the petit appartement de la reine (Verlet 1985, p. 402)

The 1746-1748 phase saw a redecoration of the petite galerie. During this time it was called alternately cabinet des chinois – owing to the number of chinoiserie designs by the queen, which she had framed and hung in this room – or laboratoire – a laboratory where she pursued her hobbies. At this time, the oratoire was converted in the cabinet de la Méridienne with new paneling by Jacques Verberckt. The pièce des bains was redecorated with paneling by the Rousseau brothers and paintings by Charles-Joseph Natoire. The grand cabinet d’intérieur received new paneling by Verberckt (Jallut, 1969; Pons, 1992; Verlet 1985, p. 402-403).

With the death of Marie Leszczyńska in 1768, the petit appartement de la reine remained vacant until the arrival of the new dauphine, Marie-Antoinette, in 1770.

Marie-Antoinette ordered her favorite architect, Richard Mique to cover the walls of the petit appartement de la reine with white satin embroidered with floral arabesques, to give a decorative cohesion to the rooms. The cost of the fabric was 100,000 livres; the hangings were entirely replaced with wood paneling in 1783 (Verlet 1985, p. 586).

In 1781, to commemorate the birth of the first dauphin, Louis XVI commissioned Richard Mique to redecorate the cabinet de la Méridienne (1789 plan #6) (Verlet 1985, p. 586). It was in this room that Marie-Antoinette would choose the clothing she would wear that day.

The last major modification to the petit appartement de la reine occurred in 1783, when Marie-Antoinette ordered a complete redecoration of the grand cabinet intérieur. The costly embroidered hangings were replaced with carved gilt paneling by Richard Mique. The new décor caused the room to be renamed the cabinet doré (Verlet 1985, p. 586).

Of all the features of the petit appartement de la reine, the so-called secret passage that links the grand appartement de la reine with the appartement du roi is one that has become a legend in the history of Palace of Versailles. The passage actually dates from the time of Marie-Thérèse, and had always been a suite of service rooms that also served as a private means by which the king and queen could communicate with each other (1740 plan #1-4; 1789 plan #1-4). It is true, however, that Marie-Antoinette, who was sleeping in the chambre de la reine in the grand appartement de la reine, escaped from the Paris mob on the night of 5/6 October 1789 by using this route. The entrance to the so-called secret passage is through a door located on the west side of the north wall of the chambre de la reine.

The palace is now a French Historic Monument and a UNESCO World Heritage Site, notable especially for the ceremonial Hall of Mirrors, the jewel-like Royal Opera, and the royal apartments; for the more intimate royal residences, the Grand Trianon and Petit Trianon located within the park; the small rustic Hameau (Hamlet) created for Marie Antoinette; and the vast Gardens of Versailles with fountains, canals, and geometric flower beds and groves, laid out by André le Nôtre. The Palace was stripped of all its furnishings after the French Revolution, but many pieces have been returned and many of the palace rooms have been restored.

Ranked 30 years at the World Heritage Site, the palace of Versailles is one of the finest achievements of French art in the XVII th century. The former hunting lodge of Louis XIII was transformed and expanded by his son Louis XIV who installed his court and his government in 1682 . Until the French Revolution, kings succeeded one another, embellishing the castle each in their turn.